Jordan is transformed from 'Mike' to 'Michael' 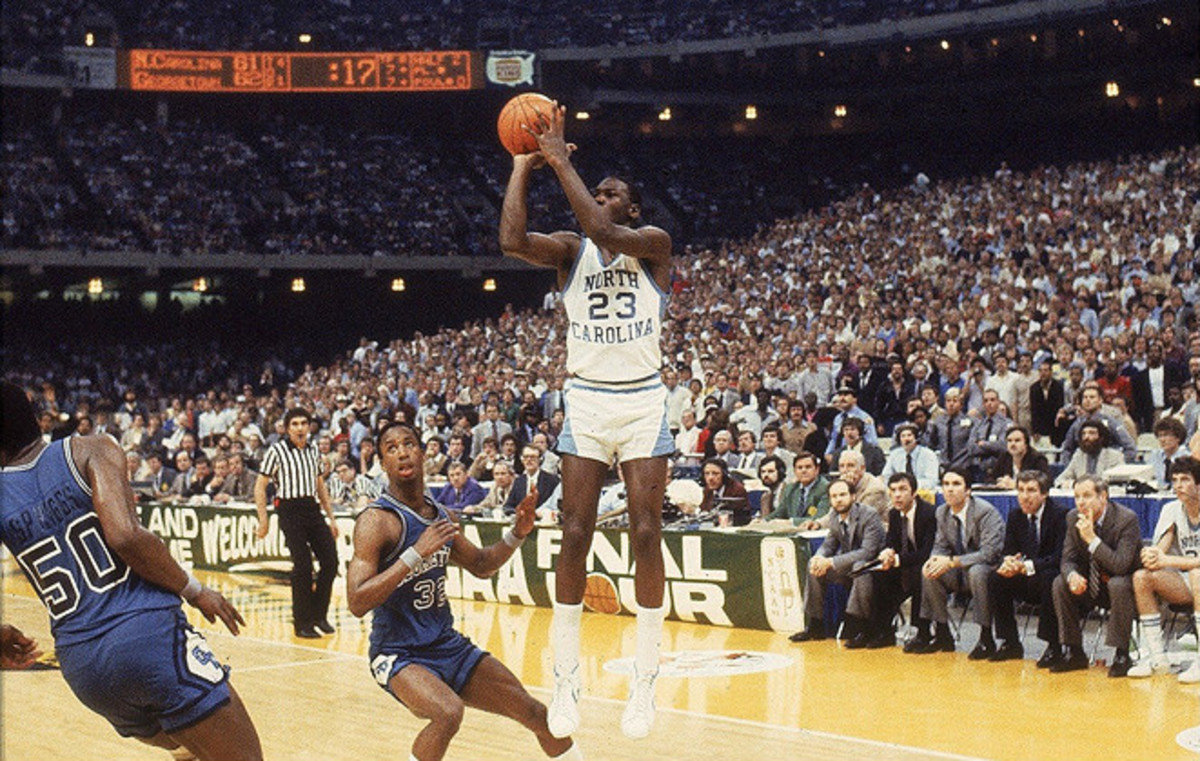 UNC's Michael Jordan takes the game-winning shot at the 1982 NCAA Final with 17 seconds remaining. A defining moment in his career, Jordan was transformed from "Mike" to "Michael".
Posted Sunday, March 27, 2022 8:00 am

When it comes to game-winning shots, few can match Michael Jordan’s buzzer-beater-jumper at the 1989 playoff contention between the Chicago Bulls and Cleveland Cavaliers. But it was 7 years earlier that Jordan delivered his first clutch moment, a swish from the wing to clinch the NCAA Division I title for the University of North Carolina.

The date was March 29, 1982 and UNC’s Tar Heels were facing the Georgetown Hoyas for the national crown. Forty-six schools stood bruised and battered at the end of the ‘March Madness’ slog, leaving the ACC leaders and Big East champs squaring off at the Louisiana Superdome.

Unbeknownst at the time, the court was laden with future NBA heavyweights such as James Worthy, Sam Perkins, Patrick Ewing, Sleepy Floyd, and of course, Michael Jordan.

UNC came off a 27-2 record after defeating Ralph Sampson and his Virginia squad at the Conference final with a 2-point margin (47-45). True to his surname, 6 ft 9 inch power forward James Worthy earned the ACC’s MVP award as the game’s highest scorer.

Led by coach Dean Smith, it was the Tar Heels’ second consecutive appearance at the national championship. A year earlier, they fell to Bobby Knight’s Indiana Hoosiers 63-50. UNC employed Worthy and Perkins, but Jordan was still a year away from college, unleashing his raw talents at Emsley A. Laney High School in Wilmington, North Carolina.

Dean Smith was a long-time fixture at Chapel Hill. Twenty years earlier, he took over the high-powered program as an untested 30-year-old assistant coach. He would prove to be not just a winner on the floor, but an innovator with a lasting influence on the sport. In 1967, he drafted Charlie Smith as the first black athlete at UNC to earn a scholarship.

Across the court was the imposing John Thompson, the Hoyas’ head coach for a decade. Georgetown basketball was in shambles when the former Celtic was brought in from across town where he ran high school hoops at St. Anthony. He recruited old students and gradually turned the prestigious University into a basketball powerhouse.

In 1975, the Hoyas made their first trip to the NCAA Tournament since 1943. Five years later, they broke into the Elite 8 and by 1982, after topping the Big East Conference for the second time, they were gunning for the national prize.

Thompson’s answer to James Worthy was Patrick Ewing, one of the first college players to start and star as a freshman on a varsity team. The 7 ft towering center would be called multiple times for goaltending at the final against UNC, a deliberate strategy created by Thompson to intimidate the opponents.

How the NCAA Overtook its Rival, the NIT

The Hoyas were captained by point guard Eric ‘Sleepy’ Floyd, an all-around prodigy athlete whose scoring prowess earned him the Big East MVP. He led the Hoyas in points during each of his playing seasons and to date, remains Georgetown’s all-time leading scorer.

The Final Four was familiar ground for UNC as the Tar Heels overran James Madison, Alabama, and Villanova to take on Houston at the Semifinal. Confronting another group of future NBA’s that included Clyde Dexter and Akeem Olajuwon, UNC came away with a 68-63 victory on the thrust of Perkins’ 25 points and Jordan’s 18.

Georgetown’s journey through the Tournament saw them clobber Wyoming, Fresno State, and Oregon State to meet Louisville at the Final Four. The latter nabbed the NCAA trophy in 1980 with key member Rodney McCray, but this time, along with his brother Scooter as teammate, Louisville succumbed 50-46.

The stage was set in New Orleans with over 60,000 fans packing the Superdome. Less than strangers, Smith and Thompson were actually friends from the days when Smith recruited players from St Anthony. As head coach of the 1976 U.S. Men’s Olympic Basketball team, Smith also had Thompson by his side as assistant coach.

On the court, two other close but rivalrous relationships highlighted the night. UNC’s Worthy and Georgetown’s Floyd grew up together in Gastonia, North Carolina. They lived 2-3 miles apart, attended the same church, and played high school ball against each other.

But all of the intimacies were now set aside.

The highly-anticipated match became a tightly contested fight with 15 lead changes that saw neither team hold a lead by more than a few points. As most historic games are forged with drama and suspense, the climax here unfolded in the final seconds.

With less than a minute remaining in regulation time, the score was 61-60 in favor of the Tar Heels when Floyd eluded two defensive players to land a jumper from 2 feet in front of the foul line and make it 62-61 for the Hoyas.

During the ensuing timeout huddle, anticipating that Georgetown would intensify their man-for-man coverage on Worthy and Perkins, Smith designed a plan for the ball to end up with Jordan and told him to release a shot if he was open.

The ball passed around and found Jordan unmarked in the wing. With 17 seconds to go, he took a 16-foot jumper that put UNC back on top 63-62. It would be the game-winning sink and Jordan’s entry into basketball lore.

The Hoyas then drove the ball down court only to lose it to Worthy on a mistaken pass. Heading to the net, Worthy was fouled and although he missed his free throws, the clock ran down to the final second when the Hoyas’ long-range desperate toss fell short.

Within two years, each of those 5 young men who did battle that night were on their way to the NBA: Worthy to the Los Angeles Lakers, Perkins to the Dallas Mavericks, Ewing to the New York Knicks, Floyd to the New Jersey Nets, and Jordan to the Chicago Bulls.

In an interview leading up to the release of his documentary, The Last Dance, Jordan said on his jump shot: “…up until that point, no one knew who I was...I was just known as Mike Jordan, and when I hit that shot my whole name became Michael Jordan.”