Ayrton Senna, Anatomy of a Crash 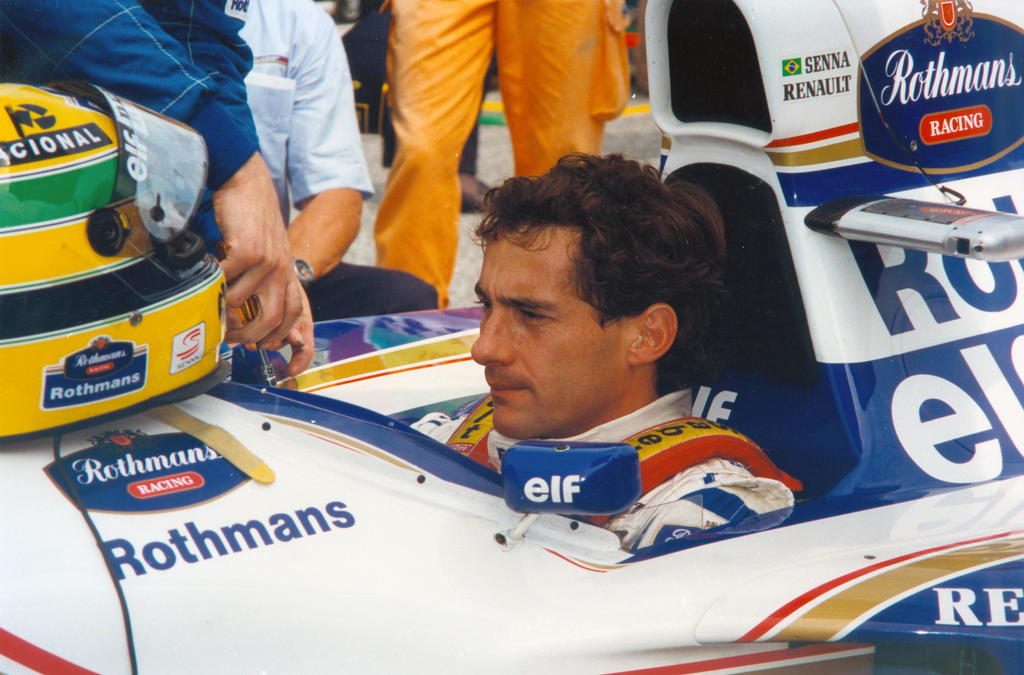 Brazilian F1 pilot, Ayrton Senna, shown in his car the weekend he was killed at the San Marino Grand Prix (May 1, 1994). The legendary driver's death, which remains a mystery, changed Formula One forever.
Posted Sunday, October 16, 2022 8:00 am

Beloved, respected, and even idolized, Ayrton Senna was one of the world’s leading drivers on the Formula One circuit when he met death on the track on May 1st, 1994.

The 34-year-old Brazilian was piloting a Williams FW16 vehicle at the San Marino Grand Prix in Imola, Italy when he failed to round a corner and crashed into a concrete barrier. Upon impact, the front right of the car was smashed, spraying lethal projectiles to his head and killing him.

What caused the world class driver to lose control of his machine? After all, it was a clear day and Senna was on his 7th lap and in the lead with no cars in the flanks.

At a followup trial, Italian prosecutors implicated the Williams group for a faulty steering column that broke and rendered the car un-steerable just seconds before impact. Williams contended that the steering column snapped after the crash and the accident was caused by other forces.

Senna’s teammate, world champion Damon Hill, believed it was driver error that sent the vehicle off the road. Michael Schumacher, who was in hot pursuit just behind Senna at Imola, said that he appeared nervous from the first lap and that his car jumped and jiggled on a bump leading to the fateful curve.

In a premier motor sport where danger is part of the glamour, Senna was legendary for his single-minded and uncompromising focus. At the time of the accident, he was already 3-time World Champion (1988, 1990, 1991) with 41 Grand Prix victories and 65 pole positions.

The San Marino course, one of the fastest in the F1 circuit, was not unfamiliar terrain for the seasoned driver. He had conquered the 3.14-mile loop three times with McLaren-Honda and was now chasing a 4th title with the Williams-Renault team.

If you shop on Amazon, support us at SPORTS HISTORY WEEKLY by clicking here for ANY of your purchase needs

The race was the 3rd Grand Prix of the season and it started ominously on Friday with a wreck by one of Senna’s Brazilian compatriots, Rubens Barrichello, who narrowly escaped death after flipping his car at the Variente Bassa turn and rolling over several times.

Less fortunate was Roland Ratzenberger, an Austrian rookie who was killed on Saturday’s qualifier in a head-on collision against a wall after missing the Villeneuve Curva.

The racing world was left shaken following Ratzenberger’s death. F1 hadn’t witnessed a track fatality in 12 years and it’s been decades since the mid-century’s golden age when dozens of intrepid drivers perished behind the wheel.

The usual confident and prescient Senna was unnerved as well, and even confessed to his girlfriend that he didn’t want to race on Sunday. But as always, his competitive nature got the best of him and he couldn’t abandon the cockpit.

Friday and Saturday’s mishaps came on top of an uncanny prediction Senna had made months earlier regarding the new race rules that limited the engineering on cars- especially active electronic suspension and traction- in favor of restoring greater control to the drivers.

In an interview with a Brazilian newspaper, he said: “It’s going to be a season with lots of accidents and I’ll risk saying we’ll be lucky if something serious really doesn’t happen.”

Senna joined Williams at the start of the 1994 season after 6 successful years with McLaren. But from the outset, he struggled with the new Williams design, explaining: “I have a very negative feeling about the car and driving it on the limit…the car has its own characteristics which I’m not fully confident in yet.”

One of his requests was to adjust the steering column to allow more space in the cockpit. Williams engineers extended the length of the 22-millimeter-wide steel tube by grafting in a narrower 18-millimeter section. This modification would form the basis for the prosecution’s case.

Despite winning pole positions at both the Brazil GP and Pacific GP, the season’s first 2 races, Senna failed to reach the podium and build points. Disappointed, he felt pressured to push hard and deliver at Imola.

Race day was dry and mostly sunny, and Senna was at grid position #1 after claiming his 3rd consecutive pole. But once again, there was a dark foreshadowing. Just seconds into the race, Lotus driver Pedro Lamy collided against Benetton’s JJ Lehto.

Though Senna was far ahead and nowhere near the accident, some believe it was this early occurrence that launched the sequence of events that led to his tragedy.

With debris flung across the tarmac and cleanup under way, drivers filed behind the safety car, weaving and spinning their tires at the reduced pace to try and keep the brakes warm and tires hot. The chase didn’t resume to full speed until the 6th lap.

If you shop on Amazon, support us at SPORTS HISTORY WEEKLY by clicking here for ANY of your shopping needs

At that point, Senna was in the lead and with 61 laps originally scheduled, 10% of the San Marino Grand Prix was already completed. In a sport where performance engineering and driver skills are rewarded in millimeters and milliseconds, telemetry data added insight to the story.

9.2 seconds into lap 7, Senna was running the car at 190 mph. He was approaching the Tamburello corner, a flat left curve that was also the fastest at Imola.

At 11.0 seconds, sparks flew from the back of the car, indicating that the ride height dropped and the metal skids under the vehicle were scraping the ground.

At 11.2 seconds, the back of the car suddenly stepped out and while Senna steered into the slide, the front of the vehicle gripped and the machine veered right.

At 12.8 seconds, the car slammed into the unprotected barrier at 130 mph. The brakes had been applied and the vehicle was decelerating, but there was insufficient runoff space between the road and the wall to avoid a powerful collision.

Rejecting the argument that the steering mechanism gave out, Williams pointed to data showing that Senna was still applying twisting force to the steering wheel, indicating that it was intact at the critical moment.

One explanation for the runaway vehicle was that cooler tires, stemming from the earlier slower laps, reduced the ride height. When the car scraped the ground, possibly aggravated by bumps, the aerodynamic downforce was lost, weakening the tire grip that was necessary to hug the curve.

Adding to the overall mystery were questions surrounding the missing final 1.4 seconds of a video from Senna’s on-board camera, and possible tampering with the black box, which Williams held for a month before turning over to investigators.

Whatever the true cause of Senna’s crash, we know that May 1st, 1994, arrived with an eerie premonition. F1 changed forever on that fateful day as new safety measures were put in place around cars and racetracks, saving the lives of future drivers.