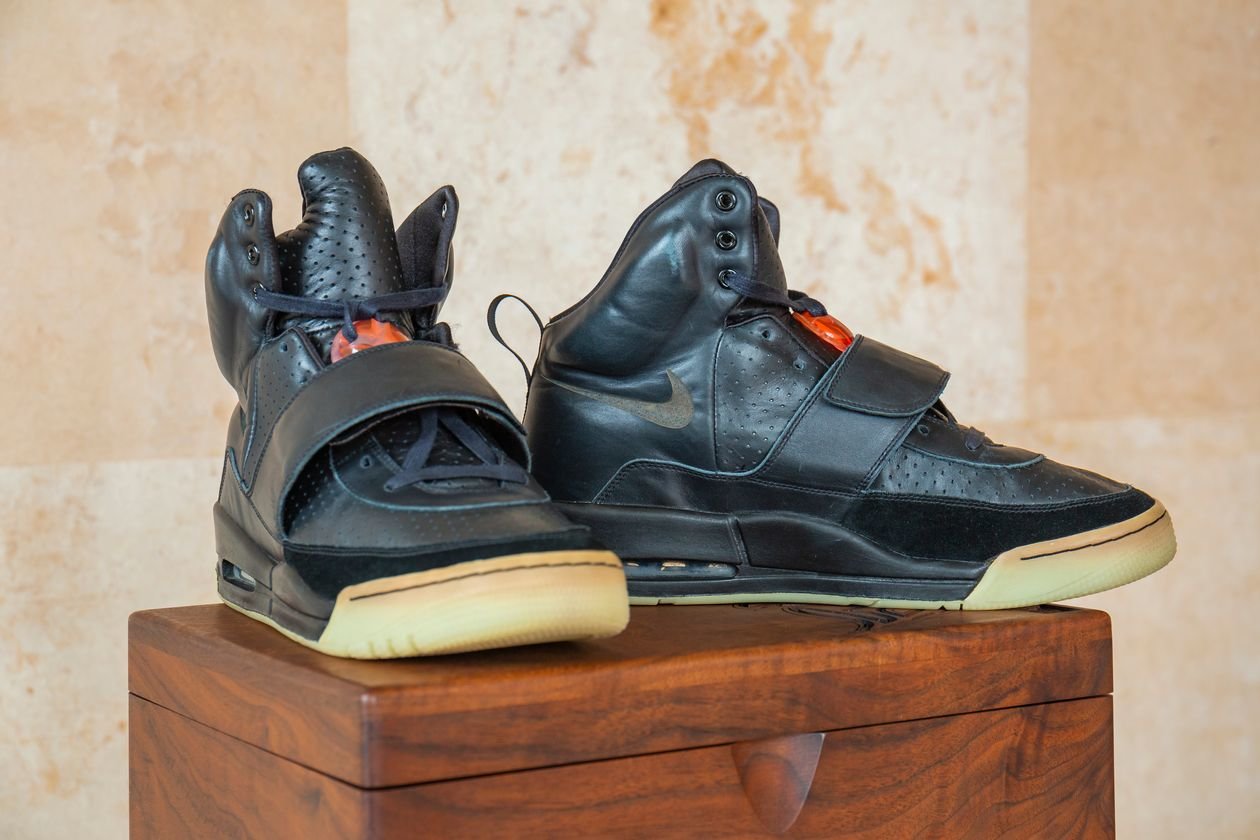 The Kanye West Nike Air Yeezy sneakers that sold for $1.8 million in auction at Sotheby's on April 26, 2021. Breaking Michael Jordan's previous record setting price for sneakers ($615,000), it was the first time that a non-athlete topped the high-end sneaker reseller market.
Posted Sunday, May 2, 2021 8:00 am

From sports, to fashion, to collectibles, the athletic shoe has seen it all. The latest chapter in sneaker mania witnessed a pair of Nike Yeezy footwear fetch $1.8 million, a record sum paid for any known shoe, anywhere.

Sold at private auction by Sotheby’s, the high-tops commanded a price almost 3 times greater than Michael Jordan’s game-worn sneakers that went for $615,000 in the summer of 2020. What’s more, it was the first time that such a hefty price was dished out for athletic shoes that didn’t belong to an athlete.

Driven by the internet, the subculture craze for celebrity sneakers spawned a lucrative reseller market that has sent jaws dropping and eyes popping. Online StockX was even started as an exchange platform for these over-hyped rubber bottoms, utilizing the same transparent bid/ask quotes and historical data points associated with the stock market.

This ‘stock market of things’ was co-launched in 2016 by Dan Gilbert, founder of Quicken Loans and owner of the Cleveland Cavaliers who watched his teen age sons buy and sell sneakers through ebay. To the seasoned businessman and entrepreneur, those transactions were murky, information was limited, and traders were unreliable. As an answer, he came up with StockX.

Long before evolving into pricey, pop-culture investments, American sneakers originated as humble canvas top and rubber sole keds. They replaced clonking leather walkers and were dubbed sneakers since they allowed a person to “sneak” around silently.

Converse debuted the All-Stars in 1917 and later hired hoops star Chuck Taylor as their salesman. Taylor traveled the country for nearly thirty years, conducting free basketball clinics in high school gyms and college campuses, and selling his shoes out of the trunk of his car. By 1932, the Chuck Taylor All-Stars were carrying his signature ankle star patch to become the greatest selling basketball shoes of all time.

When basketball became an Olympic sport in 1936, Taylor designed a white high-top model with blue and red trim for the American squad. The Converse All-Star remained the official shoe of the Olympics team until 1968. As a physical fitness consultant to the armed forces during WWII, Taylor also outfitted GI’s with his sneakers for their calesthenics exercises.

Across the Atlantic, Joseph Foster supplied Britain’s 1924 Olympic sprinters with his spiked running shoes. Those athletes were immortalized in the 1981 film, ‘Chariots of Fire’. Decades later, Foster’s grandsons broke away to found Reebok.

In Germany, Adolf Dassler and his brother Rudolph created the famed three-striped Adidas shoes. Jesse Owens won four gold medals in them at the 1936 Olympics. After the war, Rudolph split from his brother to form Puma, launching a bitter rivalry between the two siblings.

Sports legends such as Muhammad Ali, Franz Beckenbauer and Zinadine Zidane helped brand Adidas, while Pele, Diego Maradona and Boris Becker ran around in Pumas. At the opening whistle of the 1970 World Cup final between Brazil and Italy, Pele bent down to tie his shoe laces, drawing the attention of millions of TV viewers to his Pumas. The distraction was part of a $125,000 prearranged deal with the footwear company.

In Hollywood, 1950s counterculture idols James Dean and Marlon Brando were seen wearing sneakers on and off the set, helping to transform the athletic shoe into casual fashion wear. But it wasn’t until decades later that Michael Jordan and his gravity-defying leaps led to an explosion in sneaker branding.

Signing up with Nike in 1984, the basketball superstar took the sneaker to new heights and along with it, Nike’s profits. Jordan and his sneakers became cultural icons and the street followed with myriads of new designs, colors and uses. The air-soaring legend might have retired from basketball in 2003, but the shoes that bear his name are still flying high almost 2 decades on.

What’s different this time around in the upper-end of sneaker trading is the departure of athletic footwear from its traditional link to sports personalities. The Nike Air Yeezy 1 that changed hands at Sotheby’s weren’t associated with the likes of Michael Jordan, Magic Johnson, or Charles Barkley, all of whom carry their own signature collection. They were branded by Kanye West, a rap artist turned fashion designer.

West wore the pair in 2008 at the 50th annual Grammy Awards where he performed “Hey Mama” and “Stronger” and won 4 categories, including Best Rap Album. Made exclusively for the musician with design input from Mark Smith, Nike’s creative director, the size 12 sneakers feature soft black leather tops with perforated detailing, a forefoot strap, and a signature ‘Y’ medallion lace lock in bright pink. It was the first time that such sneakers were created for an artist and not a sports figure.

The Nike Yeezys helped pave the way for many of West’s fashion collaborations. As prototypes, they caught the eye of Ryan Chang, a rare sneaker collector who bought the shoes and then flipped them at Sotheby’s. Founder of Applied Arts, Chang sees hidden value in these unique canvas and leather tops, which he regards as objects of fine art that define their designer, or a particular cultural moment in history.

It’s been a long journey for the humble sneaker, which is now being chased, hyped, and inflated by new-age treasure hunters. Another noteworthy transformation in the exclusive sneaker reseller market is the profile of today's buyers. It wasn’t a footwear-loving collector, or a pop culture art dealer that won the bid at Sotheby’s. It was a company called Rares, an investment firm that plans to sell fractional ownership in the sneakers to the mass market.

Backed by venture capital money, Rares is an underwriter that offers shares in luxury goods, artworks, and collectibles. Buying fractional strips in these assets doesn’t give owners an opportunity to wear, display, or drive their prized possession, but a chance to get in with an investment that is normally out of reach for the average person.