A Golf Tournament for the Ages 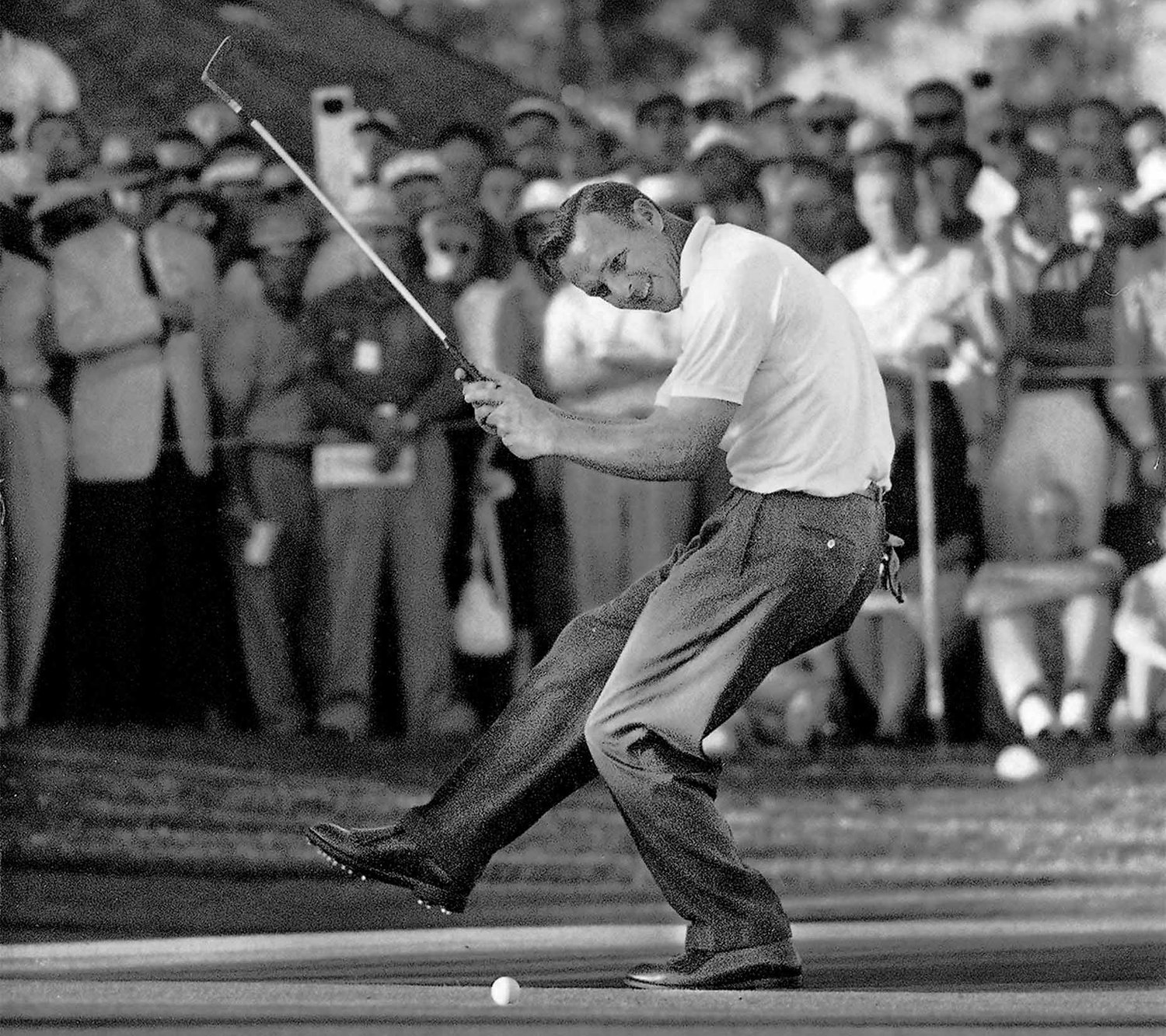 Arnold Palmer celebrating his victory at the 1960 U.S. Open where he delivered the greatest comeback in tournament history. Opening a new generational era in golf, the event also witnessed the arrival of Jack Nicklaus and the exit of Ben Hogan.
Posted Sunday, August 28, 2022 8:00 am

Sixty-two years ago, Ben Hogan, Arnold Palmer, and Jack Nicklaus did battle at the foot of the Rocky Mountains outside Denver, Colorado.

The drama didn’t just witness the greatest comeback in U.S. Open history, but it also featured three generations of legends colliding at an inflection point in their remarkable careers.

At the end of that three-day championship run, the world saw the crowning of a new king, the arrival of a young prodigy, and the exit of a celebrated master.

On June 16, 1960, a record number of spectators streamed into the Cherry Hills Country Club to watch the 60th edition of the U.S. Open. The warm summer air belied the expansive snow-capped mountains in the distance as one by one, golf’s greatest players of the day took their turn teeing off.

Laid out in a true classic design, the 71-par Cherry Hills course was the first to entertain a U.S. Open west of Minneapolis (1938) and it was now hosting its second such challenge. Unlike today’s schedules that are stretched over 4 days, the competitions then were squeezed into 3 days of intensive grinds, with Saturdays serving up 36 holes of gut-wrenching highs and lows.

Ben Hogan, 4-time winner of the U.S. Open, was gunning for his 5th title. A veteran champion of all 4 majors, Hogan’s prime years were between 1938 and 1959 when he won 63 professional golf tournaments despite the interruption of World War II and a near-fatal accident that left him with multiple fractures.

The Hogan mystique lay with the golf swing, in which he combined theory and practice to near perfection. The 47-year old had already written two books on the game, one of which, “Five Lessons: The Fundamentals of Golf” (co-authored), was the most widely read golf tutorial.

Fresh from his win at the Masters where he birdied the last 2 holes to defeat Ken Venturi by a single stroke, Arnold Palmer was hoping to carry his good fortunes to the next calendar major. The 31-year old native of Latrobe, Pennsylvania who turned pro six years earlier was coming up when television was just starting to broadcast the game across America.

His humble working-class roots and plain-spoken popularity helped change the perception of golf from an elite, clubby pastime to a sport for anyone and everyone. Little did the world  realize that Palmer’s signature would dominate golf for the next decade.

Joining the elders in the gallery was Jack Nicklaus, the reigning amateur champion. An all-around high school athlete, Nicklaus made his mark sweeping a variety of state and regional junior titles before clinching the 1959 U.S. Amateur.

He played in his first U.S. Open two years earlier and though he missed the cut, he survived the 1958 event to tie with a 41st place finish. Following his dazzling performance at the 1960 Open battleground, Nicklaus announced his big arrival.

The 20-year old student from Ohio State would turn pro the following year and forge a brilliant career that saw a record 18 major titles out of 117 professional victories.

The 1960 U.S. Open was packed with other luminaries such as old-timer Sam Snead, South Africa’s Gary Player, and defending champion, Billy Casper. On the amateur ranks, the unlikely musician and big band singer Don Cherry was also making a run for a piece of the $60,000 purse.

But leading the pack from day one through the last hole of the third round was Mike Souchak, the 11-time PGA Tour winner who made the cover of Sports Illustrated in its preview of the Bing Crosby Pro-Am. Souchak maintained a wire-to-wire lead, firing a 208 (-5) and keeping Hogan and Nicklaus who were tied for 5th, at 3 strokes behind.

Not even posting in the top ten, Palmer was 7 strokes behind the leader and tied for 15th going into the final round. It was then that the drama started to unfold.

The afternoon tension was punctuated with cheers and gasps as the field traded tight leads. Souchak started his death march in the morning with a double bogey that ended his third round at 73. Though still in the lead, he cratered with more misses to a final round of 75.

Hogan saw his fate sealed at the par-5 17th hole when he spun the ball in the water to produce a bogey. Trying to recover from his blunder, an aggressive swing to start off the 18th did him even worst with a triple bogey.

The young man barnstorming through the course landed an eagle at 5th and birdie at 9th to briefly capture the lead, but lost it with a 3-putt bogey from just 10 feet away on the 13th, and then fell short again on the 14th.

Before the day was out, the Cherry Hills grounds were littered with casualties.

At 1.42 pm when Palmer stepped up to launch his fourth round, nobody believed he was still in contention. But luck and skill played into his hands as the one rule in golf that always holds constant asserted itself with fury: for one player to claim the trophy, others have to miss their shots.

Starting his sprint from behind, Palmer managed to conquer his biggest frustration at the tournament, the first hole. The 346-yard, par-4 challenge with an elevated tee kept him off the green since the opening round.

Two more on the 6th and 7th closed him out with a 30. After coasting with pars in the back 9, the future “King” pulled away with a 65 for the round, completing the tournament in 280 (-4) and delivering the greatest comeback in U.S. Open history.

Flinging his cap in the air, golf’s new ruler celebrated his first and what would be his only U.S. Open victory. Nicklaus was runner-up at 282 (-2) and on his way to stardom after producing the best amateur performance since Johnny Goodman won in 1933. Hogan, falling back to 284 (even) and tied for 9th place, was now a revered relic.

A new era in professional golf had begun.