The Brooklyn Cyclones, Two Decades On

Tapping into fan nostalgia and developing talent for the majors 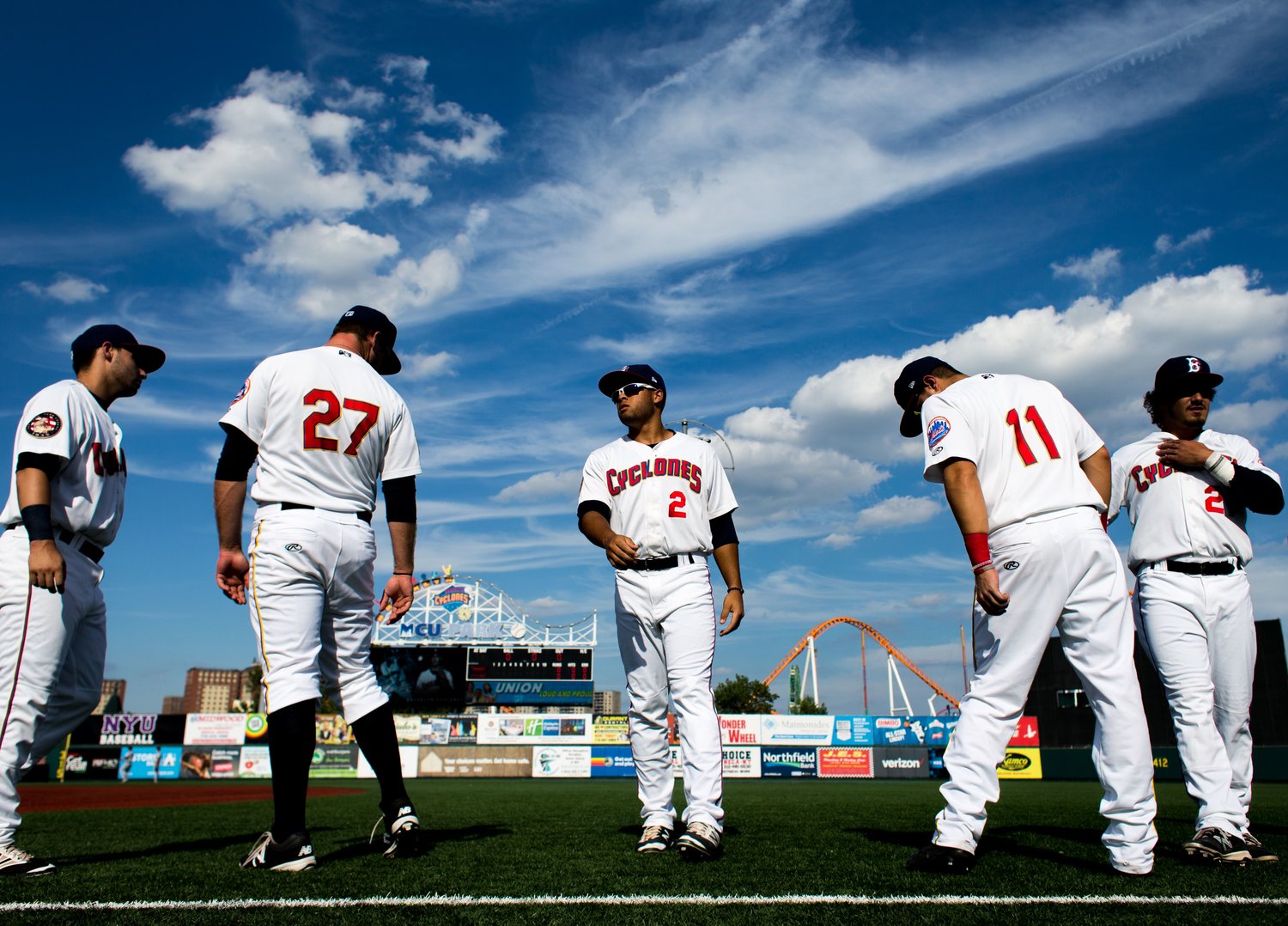 Members of the Brooklyn Cyclones stretching at their field in Brooklyn, New York. The Cyclones were the first professional baseball team to return to Brooklyn after the Dodgers left in 1958.
Posted Sunday, February 20, 2022 8:00 am

Steve Cohen, Vice-President of the Brooklyn Cyclones, was there when tickets first went on sale in the Spring of 2001. “I remember the line going around the block and thinking, this is bigger than what we expected.”

The Brooklyn Cyclones are the New York Mets’ A-league franchise. When they opened their gates a little more than two decades ago, they were the first professional sports team to return to Brooklyn since the Dodgers packed up for Los Angeles in 1958.

Few places in America evoke more baseball nostalgia than Brooklyn, New York. Jackie Robinson, Pee Wee Reese, and Gil Hodges are memorialized in monuments, parkways, and gardens throughout the borough. Old-timers still reminisce about the 1955 World Series, the only victory the Dodgers could muster against their cross-town rivals, the Yankees.

The Cyclones play in Maimonides Park, a 7,000-seat stadium adjacent to Coney Island’s famed amusement park. Everything in the vicinity conjures early and mid-20th century images, such as the Cyclone Roller-Coaster, which the team is named after, the original Nathan’s Famous hot dogs, and the board-walk along the ocean.

Among the team’s mascots are ‘Sandy the Seagull’ and ‘Pee Wee’, named after Hall of Fame pitcher, Sandy Koufax, and Reese. At every game, the Cyclones also entertain the crowd with a hot dog race on the field between ketchup, mustard, and relish, sponsored by Nathan’s Famous.

“The second generation wants to experience what their parents had,” says Cohen, who has no relation to the current Mets owner with the same name, Steve Cohen. The latter acquired the Mets and their affiliates at the end of 2020.

Brooklyn-born himself, Cohen grew up in nearby Long Island and studied Sports Management at UMass-Amherst. He spent 10 years with the St. Louis Cardinals affiliate in Florida before joining the Mets minor league outfit.

Tickets were so popular in the Cyclones’ first season that additional seats were added in the stadium to accommodate the unexpected swell of fans. The team finished their inaugural year with a 52-24 record and went on to beat the Staten Island Yankees in the “Battle of the Boroughs” for a berth at the NY-Penn League championship.

The Cyclones won the series opener 8-4 against the Williamsport Crosscutters on September 10, 2001. The next game was scheduled in Brooklyn on 9/11, but the attacks in downtown New York City and Washington, DC canceled the match and the rest of the baseball season. Both teams were declared co-champions for that year.

Two more out-sized events would disrupt ball play in Brooklyn. Hurricane Sandy, which barreled up the Atlantic coast in November of 2012, flooded the field and destroyed much of the area.

“It was a real struggle and we weren’t sure we were going to be able to play here,” recalls Cohen. “There was a lot of community support and getting people back into the stadium felt like a real accomplishment.”

Then came Covid-19, which shut down most sports in 2020. Ironically, the pandemic followed the Cyclones’ most successful season and preceded their worst. In 2019, they defeated the Lowell Spinners, the Red Sox farm team, for the league championship. It was Brooklyn’s first baseball title since the 1955 Dodgers. Two years later, they went 48-70 and dropped to 5th place.

Like most team affiliates, the Cyclones are primarily in the business of developing players for the majors. With no TV contracts, they operate on sponsorships, concessions, and gate receipts, while player salaries are paid by their senior ball clubs.

“Minor league baseball is like school,” notes Cohen. His franchise counts over 100 alumni who graduated to the majors since the turn of the millennium.

Danny Garcia was the first Cyclone to break into the majors, playing for the Mets in 2003 and 2004. Scott Kazmir, current pitcher for the San Francisco Giants, rose to become a 3-time All-Star and AL Strikeout Leader (2007). Joe Smith, who was named one of the top 20 prospects in the NY-Penn League, went on to a 15-year career in MLB.

On the flip side, former senior players have come down to the Cyclones to develop their skills in coaching. Howard Johnson, Mookie Wilson, and Wally Backman, all veterans of the 1986 Mets World Series winning team, have had stints managing the Cyclones.

With the recent changes implemented in baseball’s minor league system, the Cyclones now play in the North Division of the High-A-East. Mirroring MLB, the High-A consists of 30 minor league franchises across the country.

The previous short schedule was also scrapped for a lengthier season, which now starts in April instead of June. While the number of games the Cyclones play increased from 76 to 132, the duration of individual matches was scaled back, which helps avoid injuries in late innings.

Stickball, Death of a Street Culture- Keeping the game alive on Stickball Boulevards

Bonus structures and improved salaries ranging from $1,200-$1,500 a month have also benefitted players. Importantly, their hotel rooms and meals, previously paid out of pocket, are now covered by the teams.

Cohen remembers- “When I started 30 years ago, the post-game food for players were the hot dog leftovers at the concession stands.” Today, members of the Cyclones are treated to quality-grade meals before and after a game.

In terms of the community, the population makeup in Brooklyn has shifted dramatically since the Cyclones started playing. New housing developments and an expanded economy ushered in new immigrants from around the world. While the mission of delivering a great Cyclones experience to fans hasn’t changed, the challenge today is selling baseball to Brooklynites who aren’t rooted in the sport.

“We need to reach people from other demographics who don’t come from a baseball lineage,” says Cohen.

Regardless, whether fans are long-time Brooklyn residents, recent transplants, or nostalgic visitors to Coney Island, attending a Cyclones game and exploring the environs is a rewarding experience for the whole family.