A salad dressing is born on the racetrack

In ‘Once Upon a Wheel', a 1971 documentary hosted by Hollywood icon Paul Newman, the famed actor likens the racetrack to “a theater that has its audience, its cast, its drama,

A salad dressing is born on the racetrack 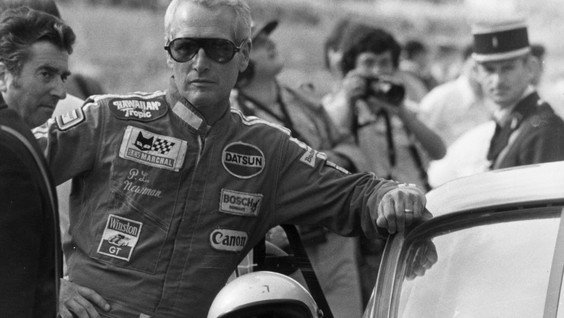 In ‘Once Upon a Wheel', a 1971 documentary hosted by Hollywood icon Paul Newman, the famed actor likens the racetrack to “a theater that has its audience, its cast, its drama, comedy, and sometimes its tragedy."

Newman led a dual life in the latter part of his life, discovering auto racing in his late 40s and pursuing it as an amateur before launcing a professional career behind the wheel.

He wasn’t the only celebrity who relished high performance road thrills. Other media personalities who enjoyed the track included James Dean, Steve McQueen, Patrick Dempsey, Frankie Muniz, Tim Allen, and Jason Priestly. But next to Newman, they were merely weekend warriors.

Newman also wasn’t the only sports figure associated with the silver screen. Johnny Weissmuller (swimming), Chuck Norris (martial arts) and Arnold Schwarzenegger (body building) parlayed their athletic careers to acting. But Newman’s trajectory was the opposite, starting out in the movies before moving into the cockpit.

He caught the bug for motor sports while filming the 1969 movie ‘Winning’. Newman played a racer who aspires to win the Indianapolis 500 and as part of his training for the part, he studied under Formula One driver, Bob Bondurant.

Bondurant had just opened his driving school and Newman and co-star Robert Wagner were among his first students. Bondurant died in 2021 and until recently, his racing academy was the largest purpose-built driving school in the world.

Already a household name for his roles in ‘The Hustler’ (1961), ‘Hud’ (1963), ‘Cool Hand Luke’ (1967) and other cinematic releases, the blue-eyed screen renegade embraced a new passion. He played football in his youth and even boxed, but commenting on being a race car driver, he said it was “the first thing that I ever found I had any grace in”.

In parallel with his prolific years in film, Newman put in one of the longest racing careers on record. Furthermore, at the age of 48, most drivers would have already retired but he was just getting started.

To avoid unwanted publicity from Hollywood, Newman registered under the name of ‘P.L Newman, Lime Rock, Conn’ and began racing in Sports Club Car of America events (SCCA). His debut came in 1972, driving a Lotus Elan at an SCCA ProSeries sports car race at Thompson International Speedway in Connecticut.

The northeast state was also his home where he and his long-time wife, Joanne Woodward, enjoyed a sanctuary from the peering eyes and cameras of Southern California.

Newman won four national championships as a frequent competitor in SCCA runs, driving primarily Datsuns and Nissans for the Bob Sharp Racing Team. He appeared in advertisements for Nissan and Budweiser, not as an actor but as a racing champion.

Not surprisingly, the film studios in Los Angeles fretted at the idea of their bankable star risking injury behind the wheel, or even worst. Still, he pursued his interest and as a regular among the crew, he enjoyed sharing laughs and chatting about cars, strictly avoiding discussions around his life in Hollywood.

On barbecue days at the track, Newman showed up with his home-made salad dressing, which became the inspiration for a non-profit food company he launched in 1982. The idea for “Newman’s Own” came from Sam Posey and his wife, who designed the label with a portrait of his face on the salad dressing bottle. Posey was a car racer before becoming a racing analyst and commentator for ABC Sports.

Later on, Newman stepped into management, co-founding in 1983 Newman/Haas Racing, which went on to win 8 Drivers’ Championships and 107 race victories in the CART and IndyCar series.

Despite their elite status, the team could never clinch the Indianapolis 500. Their best was second place with Mario Andretti (1985) and again with his son, Michael Andretti (1991).

In a May/2020 interview that Sports History Weekly conducted with Mario Andretti, the legendary auto racer commented on working alongside Newman: “I loved that man. Paul and I became very good friends. He was in love with life. He could do anything. He could act. He could race cars. He could raise millions of dollars for charity.”

Newman the actor reached his pinnacle with an Academy Award in ‘The Color of Money’ (1986). Newman the racer posted his best performance at the 1979 24 Hours of Le Mans, driving a Porsche 935 with Dick Barbour and Rolf Stommelen.

Newman was 54 years old at the time and the trio placed 2nd in the prestigious 300-lap grand prix endurance race. Pushing their vehicle too hard, they missed their chance at victory because of a mechanical failure.

Le Mans was Newman’s most rewarding driving experience, but he never returned to the chase due to the overbearing media attention that interrupted his concentration. Reporters accosted him for interviews during pit stops and aggressive paparazzi even scaled the walls of the French chateaux where the team was staying.

Newman was certainly aware of the sport’s danger and he wasn’t far from its tragedies. In 1983, Stommelen, his driving partner from Le Mans, was killed at the LA Times Grand Prix. Four years later, Jimmy “Fitzy” Fitzgerald, a racing friend who was also the all-time winningest driver in the SCCA, perished at the St. Petersburg Grand Prix.

Sixteen years after Le Mans, at the age of 70, Newman became the oldest driver to be part of a winning team in a major sanctioned race. Driving for Roush Racing, he emerged victorious co-piloting a Mustang in the GTS-1 Class at the 1995 24 Hours of Daytona.

A decade on he was still at it, taking first place on a rainy track at Lime Rock and driving a “brutish Corvette” that prominently displayed the number of his age, 81.

Newman’s last professional race was the 2007 SCCA GT-1 pursuit at Watkins Glen International. He managed a fourth-place finish as a fatigued 82-year-old, to which he remarked afterwards, “I wish I was 81 again”.

Paul Newman, renaissance man in the studio and on the track, died a year later at the age of 83.