The Olympics, the tragic death of Team USA, and the three stooges 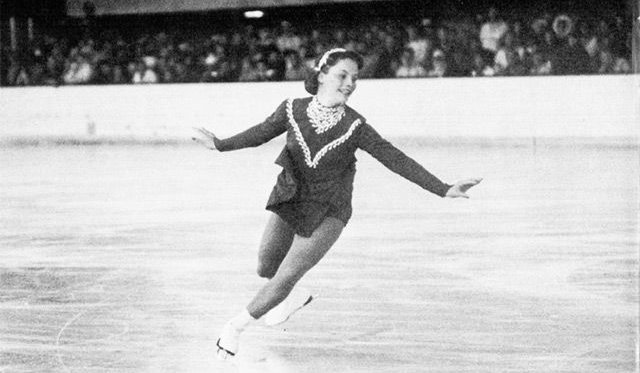 Carol Heiss at the 1960 Winter Olympics in Squaw Valley where she won the gold medal in figure skating. Overall, she claimed 20 gold & silver medals between the Olympics, World, North American, and National Championships.
Posted Sunday, February 6, 2022 8:00 am

She was the first female skater to land a double axel in competition. Carol Heiss, with her captivating smile and All-American appeal, took silver at the 1956 Winter Olympics in Cortina d’Ampezzo and then followed up with a gold medal four years later.

“At the 1956 Olympics I had everything to gain and nothing to lose,” says Heiss in conversation with Sports History Weekly. Now 82 years young, she was only 15 going into her first Winter Games where she placed second behind fellow American, Tenley Albright.

It was the golden age of American figure skating, launched by Dick Button who topped the podium in 1948 and 1952, and brothers Hayes and David Jenkins who kept the medals brandished for the rest of the decade.

Along with Tenely Albright, Heiss represented the women’s achievements on ice during that period. She graced the cover of Sports Illustrated magazine in the February 7, 1955 issue before even claiming her five consecutive World Championships.

Heiss capped off her career with a unanimous vote at the 1960 Winter Olympics, beating out Dutch skater, Sjoukje Dijkstra, for the gold accolade. It was a heartfelt victory for the American luminary, whose loving and supportive mother died of cancer 3 years earlier.

Donations to the American Cancer Society

Growing up in Queens, New York, she started skating at the Brooklyn Ice Palace. She was coached by Pierre Brunet, who along with his wife, won the pairs in the 1920s and 30s representing France.

“He was inspiring and tough at the same time,” recalls Heiss of Brunet who stayed with her until she retired from competition.

Asked if her busy schedule and commitment to figure skating disrupted her childhood life, she says it did not. “I still had my school friends, rode my bike, and jumped rope like all the other kids.”

Heiss kept her discipline, managed her time, and even enrolled at New York University. Nevertheless, following her silver medal in Cortina, the pressure mounted with each passing year to capture gold at the next Olympics in Squaw Valley, California.

“The pressure was unbelievable and I understand what the kids are going through now,” she says referring to the Beijing Games.

After coming off the ice in Squaw Valley with the highest score, she was the first American to win gold at the 10-day event. Standing on the podium and feeling relieved as much as accomplished, the 20-year-old champion took in an emotional moment as the national anthem played and the American flag unveiled.

A few weeks later in March of 1960, she outskated Dijkstra once again for the top prize at the World Championships and then called it quits. Her wedding to figure skater, Hayes Jenkins, followed in April. The two had been romantically involved for some time, but kept it a secret from the public.

“I felt it was time to get out, earn some money and help my dad with the bills.” Heiss benefitted from a supportive structure at home, but her skating years didn’t come without financial sacrifices in a three-sibling household.

Unlike today where public ice rinks abound in towns and parks, serious skaters back then joined private skating clubs that charged dues. She also felt indebted to Brunet who offered her coaching hours beyond her father’s pay.

Soon enough, Hollywood came calling with a film offer. In the 1930s, 20th Century Fox scored a number of screen hits with Sonja Henie, the Norwegian skating legend, and Heiss was now on their radar.

She was staring at several options, which included the Ice Capades, Ice Follies, or film. She chose the movies and took on the role of Snow White in the comedy, “Snow White and the Three Stooges.”

The next script proposed to her was working alongside Jane Fonda. But Heiss wanted a stable, grounded life with her new husband, not an acting career. Even the “Stooges” urged her to avoid Hollywood if she was planning to raise a “normal” family.

While in Los Angeles filming Snow White, she received a dreaded call late one night. “My brother-in-law called me at 2 am and said they were all gone.”

On the morning of February 15, 1961, a plane that was carrying the U.S. figure skating team to the World Championship in Prague crashed outside Brussels and everyone was killed. On board were 18 skaters, 6 professional coaches, and 10 officials and family members.

Heiss knew them all and even roomed in Squaw Valley with Laurence Owen, who along with her older sister and mother, were victims of the crash. A young promising talent, 16-year-old Laurence appeared on the cover of Sports Illustrated just two days earlier with the caption: “America’s most exciting girl skater.”

Heiss’ former coach, Brunet, narrowly escaped the doomed flight. He was scheduled to travel with his new trainee, but decided last minute to cancel after his skater came down with the flu.

The tragedy reverberated across the country. It was the end of U.S. dominance in figure skating and America’s standing wouldn’t return until 8 years later when Peggy Fleming reclaimed the title at the 1968 Winter Olympics in Grenoble, France.

Heiss moved to Akron, Ohio, her husband’s hometown, where she raised her 3 children. She worked as a spokeswoman for several companies, did product endorsements, and commented for all three TV networks.

It was the life she wanted. “I was glad to be home with my children and still be able to earn some money.”

Looking back, Heiss notes that figure skating has changed dramatically since her era. In the way of followings, the worldwide TV audience wasn’t there in the 1950s and early 60s. The first Olympics that were broadcast live were the ones she participated in Squaw Valley.

In terms of technique, “For the boys it’s quadruples now and for the girls, triples.” To support the the elaborate jumps, the boots have also gotten harder and heavier. The athleticism has grown tremendously as well. “The beauty is still there, but it’s much more athletic now,” she emphasizes.

More than sixty years after skating to glory, Heiss remains fit, active and has stayed in close contact with other American ice veterans such as Barbara Roles, Peggy Fleming, and Scott Hamilton.

Her collection of 12 gold and 8 silver medals- between the Olympics, World Championships, North American Championships, and National Championships- remain a monumental achievement for herself and for the country.