The Computer as an Athlete 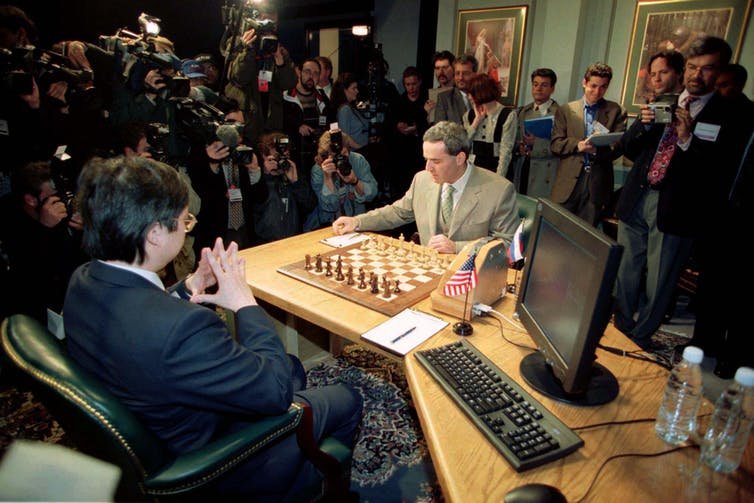 World chess champion Gary Kasparov at the 1997 rematch against IBM's Deep Blue supercomputer. Moving the pieces for the machine is Feng siung-Hsu, one of Deep Blue's original developers. The historic 6-game rematch was the first time a computer defeated a world champion under official tournament regulations.
Posted Sunday, April 17, 2022 8:00 am

On May 11, 1997, thirty-four-year old Gary Kasparov stormed out of a chess tournament, squirming in fury and shaking in disbelief. It wasn’t so much that the world’s reigning chess champion lost his first match, but more that he was toppled by a cold and lifeless machine.

A watershed moment in the history of chess and the technological evolution of mankind, it was the first time that a computer defeated a world champion in a series of games that were held under official tournament regulations.

Regarded by some as the greatest chess player of all time, Kasparov was ranked No. 1 in the world for 225 out of 228 months between 1986 and 2005. He reached the Grandmaster title, the sport’s highest designation, at the age of 17 and five years later became the youngest undisputed World Chess Champion when he unseated Anatoly Karpov.

Kasparov’s opponent on that unforgettable Spring day in New York City was Deep Blue, an IBM RS/6000 SP supercomputer developed by a team of scientists at the company.

Deep Blue evolved from Deep Thought, which had its origins at Carnegie Mellon University and was the brainchild of Feng siung-Hsu. In 1988, Deep Thought was the first computer to beat a Grandmaster when it defeated Denmark’s Bent Larsen, but it was later routed by Kasparov.

Carrying all but the physical attributes of a grueling sport fought between two opponents, chess is not just a battle of skills but a game of nerves, a test of wills, and a clash of egos.

Players face each other across the table with the same competitive spirit and determination that ordinary athletes unleash in the field or on the court. They fight for the lead in points and for the all-important psychological edge.

But Deep Blue was made of chips and software, not flesh and blood. It was the offspring of a group of programmers who pumped it with sophisticated codes and algorithms. It was also educated with the moves that Kasparov had used in previous matches, not too different from the way teams prepare for game day by studying their opponents’ strategies on film.

It wasn’t the first time that Kasparov and Deep Blue went head-to-head, or brain to circuit. Fifteen months earlier, the Soviet-born chess prodigy took on his non-human counterpart in Philadelphia in a highly publicized event that was uncharacteristic of a chess match.

It was the biggest news coverage that a chess competition had ever received and even scalpers were hawking $25 tickets for hundreds of dollars more.

Seven years in development since Deep Thought, Deep Blue emerged out of IBM’s lab to take on the world’s best in the sport. Kasparov once again stepped up to the challenge representing 1,000 years of humanity’s knowledge and experience in the game, while Deep Blue leveraged its only advantage in chess, that of speed and search.

Game 1 of the 6-game tournament saw Deep Blue defeat Kasparov in the first ever victory of machine over a world champion. But the Russian came back and the tournament ended in his favor at 4-2 (3 wins, 1 loss, 2 draws).

This time around, man still prevailed but nobody was left under the illusion that computer dominance wasn’t a thing of the future. Both sides agreed to a rematch the following year.

The Deep Blue team took their contender back to the lab, redesigned some of the hardware, doubled its calculating power, and invited other Grandmasters to spar with it, teach it new tricks, and fine-tune the program. With 256 processors in place, the electronic system was now capable of analyzing 200 million moves per second.

Like a boxer who improved his regimen and punching technique, Deep Blue was back in the ring.

Grandmasters arrived from around the world to witness the epic rematch and act as experts for the media and the public. The purse was $1.1 million, or $700K for the winner and $400,000 for the runner-up.

The showdown took place on the 35th floor of mid-town Manhattan’s Equitable Building where IBM held its stock analyst meetings. Close to 500 spectators filled the basement auditorium, which projected a live video feed of the match in addition to commentary screens.

Playing white in Game 1, Kasparov won in 45 moves. He lost in 73 moves in Game 2 and for the next three encounters the two fought to a draw. They were even at 2½ - 2½ going into the sixth and final game.

In under 20 moves, Deep Blue made a knight sacrifice which destroyed Kasparov’s defense and forced him to resign with a final score of 3½ - 2½.

Like a football team that was overwhelmed by a powerful offense, Kasparov lost to Deep Blue’s brute number crunching force. And just like any other sport played by human beings, Deep Blue didn’t need to be perfect, it just needed to make fewer mistakes.

One of Kasparov’s strategies was to play anticomputer chess, or to maneuver occasionally with suboptimal moves in order to confuse the machine. But when his strategy failed, he couldn’t accept Deep Blue’s authenticity since computers are supposed to calculate, not ‘think’.

In Game 2, he even attributed one of the moves to the “hand of God”, a reference to Diego Maradona’s controversial goal at the 1986 World Cup when he punched the ball into the net. Kasparov accused the IBM team of cheating, or coaching the computer during play. While programmers did make adjustments between games, they denied that they interfered during play.

Some chess experts claim that Kasparov did not play to his full potential, though IBM attributed their success to Deep Blue’s enhanced evaluation functions, which they kept refining with the help of other Grandmasters.

Kasparov requested a 3rd rematch but was denied and Deep Blue was subsequently retired and its circuit boards ended up as display pieces at the Smithsonian Museum in Washington, DC. and at the Computer History Museum in Mountain View, California.

Touted by most people as the triumph of machine over man, the match was probably better described by Feng siung-Hsu as a win by “man the tool maker” over “man the performer”.