50 years on the gridiron as player & broadcaster

“I put my whole life into football”, says Dan Fouts in conversation with Sports History Weekly.

50 years on the gridiron as player & broadcaster 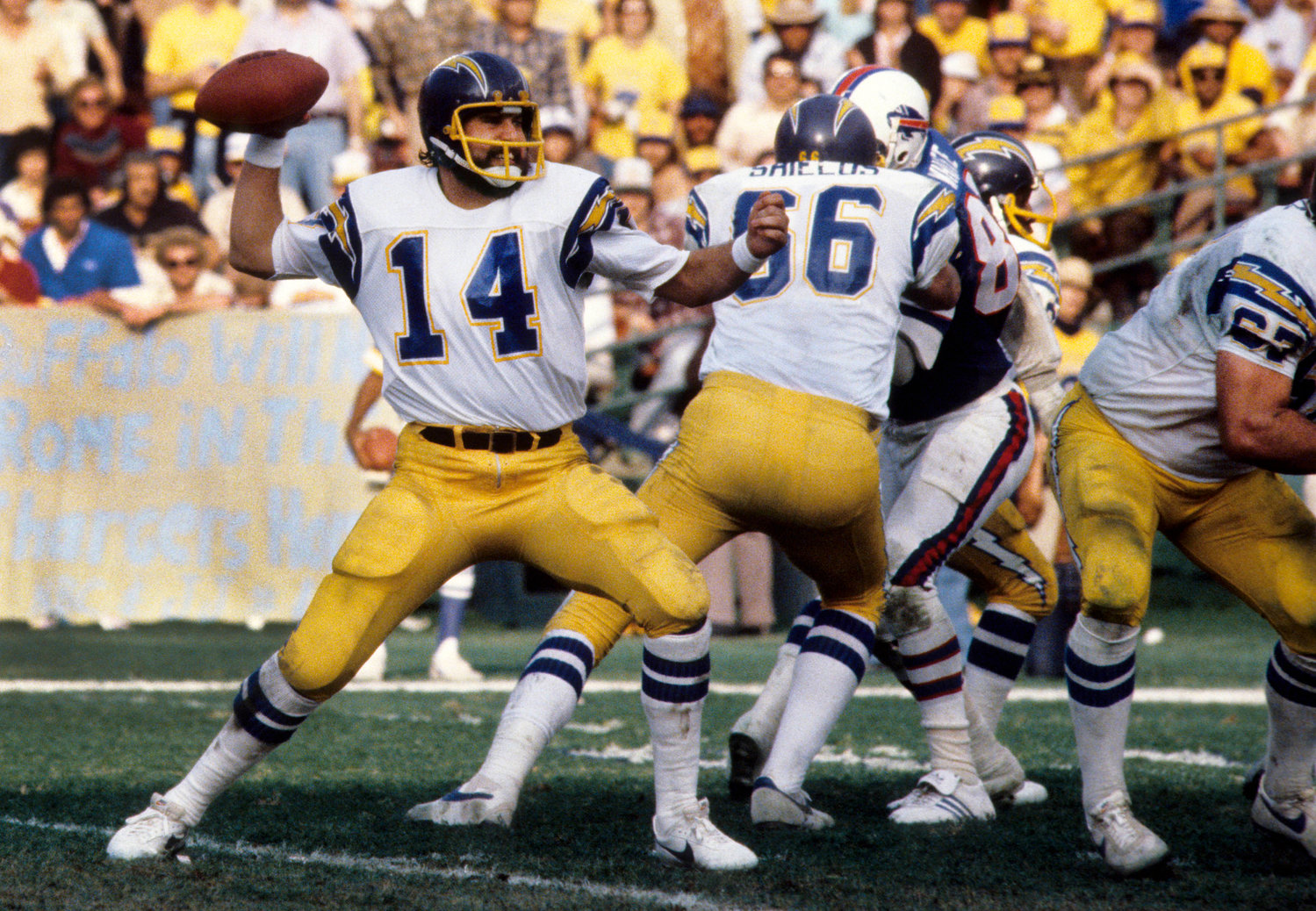 Dan Fouts launching against the Buffalo Bills during the 1980 AFC Divisional Playoff Game. Fouts spent 15 years with the San Diego Chargers, followed by 30 years in broadcasting.
Posted Sunday, October 3, 2021 8:00 am

“I put my whole life into football”, says Dan Fouts in conversation with Sports History Weekly. “My dad was a play-by-play-announcer for the San Francisco 49ers, so growing up I was always at training camp, on the sidelines during games, or in the press box.”

Now 70 years young, the renowned broadcaster and NFL Hall of Famer is a “free agent”, open to the next big opportunity. After more than 30 years of calling and analyzing games, his last contract with CBS expired in April of 2020.

50 years ago, Fouts was playing at the University of Oregon, unleashing a skillful arm and breaking school records. That pattern would carry into his professional career.

In his 3 years as varsity QB with the Oregon Ducks, he managed 5,995 yards and 37 touchdowns. He played on a scholarship, the only one he was offered coming out of a private high school in San Francisco.

It was the era of the PAC-8 and before Nike’s co-founder, Phil Knight, started showering the University of Oregon with generous gifts. It was also more than two decades before coach Rich Brooks took the Ducks to their first outright Conference title (1994) and first Rose Bowl appearance since 1957.

Oregon football struggled in the late 1960s and 1970s but in his sophomore year, Fouts helped guide his team to a 6-4-1 season. His most memorable game was against UCLA, a perennial powerhouse.

It was a stunning comeback that saw the Ducks score 20 points in less than 5 minutes to defeat the Bruins 41-40 with only 30 seconds remaining. Fouts delivered the final blow with a 15-yard touchdown pass.

Years later, he would take the field with the San Diego Chargers against the Miami Dolphins for another high-scoring, nail-biting drama. This time it was the 1981 AFC Divisional Playoff Game that became known as ‘The Epic in Miami’.

“People still talk about it today as one of the greatest games ever”, says Fouts.

Prostrated in the south Florida heat, both teams set playoff records on that day. Fouts emerged with 33 completions out of 53 passing attempts for a franchise record of 433 yards and 3 touchdowns. His attempts, completions, and yardage were all post-season NFL records.

Records seemed to define the peak of his career. During Fouts’ 15-year tenure with the Chargers, he led the NFL in passing yards 4 straight years and became the first player to surpass 4,000 yards in 3 consecutive seasons (1979-81).

Coach Don Coryell, who joined the Chargers in 1978 after successful stints with the St. Louis Cardinals and San Diego State Aztecs, was the chief architect behind the passing game. “Once he got to the Chargers, we knew we had something special”, recalls Fouts.

With Fouts at the helm, the Chargers advanced to the AFC Championship twice, in 1980 and 1981. In both years, the team’s offensive lineup led the league in either yards gained, points scored, or both.

“We had guys that were outstanding…not only great players, but smart players.”

Among them were Hall of Famers Kellen Winslow Sr. (TE) and Charlie Joyner (WR), as well as Wes Chandler (WR) and John Jefferson (WR). But where the Chargers seemed to fall short was in defense, especially in 1981 when the back collapsed to post one of the worst metrics in the NFL.

Asked if defense was the main reason why the Chargers failed to make it to the Super Bowl during those prolific years, Fouts replies “it was a team issue, not an offense or defense issue.”

The loss to the Oakland Raiders at the 1980 AFC Championship was by a single touchdown (34-27). The wider deficit against the Cincinnati Bengals at the 1981 AFC Championship (27-7) took place in record frigid temperatures, but Fouts insists that it wasn’t the extreme sub-zero conditions that set them back.

“I wouldn’t blame it on the weather, but on the fact that Kenny Anderson and the Bengals played great.”

Anderson was just one of the quarterbacks that Fouts admired and respected during his playing days. Others included Len Dawson, Ken Stabler, Jim Plunkett, Phil Simms, Joe Montana, John Elway, and Dan Marino.

Interview with Joe Theismann- Former QB with the Washington Redskins

Fouts retired in 1987 following a string of challenging seasons for the Chargers. He walked off the field with a catalog of awards and honors and career passing yards of 43,040 (currently 18th in NFL history), which rank him above most of his contemporaries. He was inducted into the Pro-Football Hall of Fame in 1993, his first year of eligibility.

Because of his background, Fouts was destined for broadcasting. “It was in my genes and something I wanted to do”. The next 3 decades saw him working as an analyst, commentator and announcer primarily at CBS and ABC, covering both college and NFL games.

Comparing broadcasting today with 30 years ago, Fouts says “Today, there are more cameras, more talented cameramen and directors, and better replays to tell the story. The overall coverage is better and technology is a big part of it.”

But what he cherishes most are the people that surrounded him in the trucks and in the booths. “I remember the great partners I had more than the games I covered. The list of announcers I worked with is a ‘Murderers Row’”.

Teaming up with Ian Eagle during his last contract with CBS, the duo was elevated to the number 2 slot for NFL coverage and was popularly called the “Bird and the Beard”.

Summing up his time behind the mic, “I enjoyed every minute of it”.

IF YOU ENJOY OUR FREE CONTENT, PLEASE CONSIDER A VOLUNTARY DONATION TO SUPPORT OUR WRITING & JOURNALISTIC EFFORTS.