70 years behind the wheel of supercharged engines 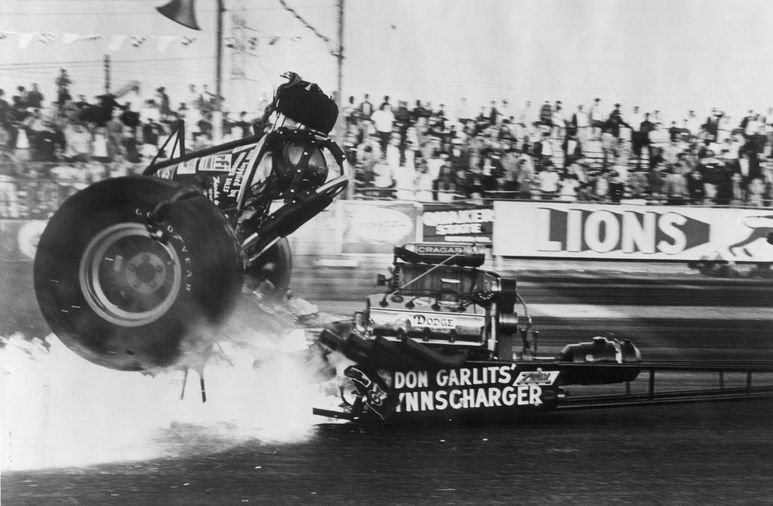 March 8, 1970- Don Garlits shown sitting between the tires the moment the engine of his dragster exploded, splitting the car in half and blowing off his right foot. The accident led the legendary driver to redesign rear-engine vehicles that revolutionized the sport.
Posted Sunday, September 4, 2022 8:00 am

“You will never beat the Californians!” Those were Wally Parks’ words to Don Garlits after the 23-year-old won his first official drag race in 1955 in his home state of Florida.

Parks was the Founder and President of California-based National Hot Rod Association (NHRA) and his prophetic comment proved to ring as hollow as an exhaust pipe.

A contest of raw acceleration between two vehicles on a short track (typically 1,000 feet), modern fuel dragsters are propelled by supercharged 11,000 HP engines that burn nitromethane.

Top fuel cars jump off the starting line at a force of 5-G (5 times driver weight) and can accelerate from 0 to 100 mph in less than a second. In 1992, a detached retina resulting from sharp deceleration of a dragster parachute sent Garlits into semi-retirement.

“You need to have extremely good reflexes and be very cool-headed,” says Garlits in conversation with Sports History Weekly.

He likens dragster pilot skills to a baseball batter who is staring at a 90-mph pitch. The clock stops ticking just before the critical second. “When I’m at the starting line, time slows down,” he says.

In the old days, before electric light signals, flag wavers initiated the start of a race. Describing that moment in the cockpit, “I could see the muscles flinch in the guy’s arm before he pulled down the flag.”

The NHRA, the most influential governing body in drag racing, was founded in 1951 to bring safety and order to a sport that was often practiced illegally on open roads.

Calvin Rice became the NHRA’s first national champion in 1955 when he ran 141.95 mph in 10.3 seconds at an air strip outside Phoenix, Arizona.

In his 40 plus years behind the wheel, Garlits accomplished more than just racetrack victories. The dragster icon broke numerous speed records and revolutionized the niche motor sport with innovative designs and applications.

Along the way, he picked up various tag names from admirers and detractors alike, such as ‘Big Daddy’ from a race announcer and ‘Swamp Rat’ from a mid-west competitor who denigrated his Florida roots.

Garlits used the less complementary sobriquet to christen his vehicles, beginning with Swamp Rat I that brought him his first world record in 1957 (176.40 mph) through Swamp Rat 38, an EV dragster that he last drove.

“The 1975 championship stands out as my most memorable race,” he recalls.

In Southern California’s Ontario Motor Speedway, Garlits managed a come-from-behind victory over his arch-rival and reigning champion, Gary Beck. He ran 259.60 mph in 5.63 seconds, a record that would hold for the next 7 years.

Later on, a curator from the Smithsonian Museum in Washington, DC paid him a visit in Florida. Pointing to the streamlined dragster that rocketed in front of 41,000 spectators in Texas, he said, “This is a national treasure”.

Garlits ended up gifting the vehicle, Swamp Rat 30, to the Smithsonian which displayed it in the nation’s capital for 15 years.

Growing up outside Tampa, Florida, the future drag racer was working as an accountant in his family’s dairy business when he realized he was destined for something else, and that was cars.

The first time he ran a drag race was on his way to school one day. Driving a used 1944 sedan, the first vehicle he ever bought, a friend pulled up next to him in a new 1949 chevy coupe and yelled out the window, “when the light turns green, let’s race!”

Garlits lost, but he became an instant convert.

As a hardscrabble upstart, he learned racing mechanics by reading and spending endless hours in his shop. Later on, he tinkered, fixed, and improved on each new generation of Swamp Rats.

Big Daddy was only certified as an engineer in later life when he earned a degree on-line. Still an avid reader, he has kept his extensive library collection of 5,000 books.

As an innovator, he was the first to add air spoilers to his dragsters, employ bike wheels on the front, experiment with an extended wheelbase, and from a showstopper performance, he helped create today’s tire burnout ritual.

In 1969, at one of the west coast events, Garlitz realized he could pick up 1/10 of a second in a race by rotating and smoking his tires at the starting line. The effect was to clean the tires of debris and lay down hot, gummy rubber that aided traction.

An inherently dangerous sport, especially in the early years when safety measures were lax and drivers sat behind fire-breathing engines, Garlits more than once escaped the clutches of death.

The most perilous moment came on March 8th, 1970 at Southern California’s Lions Dragstrip when the transmission on Swamp Rat 13 exploded, splitting the car in half and blowing off his right foot.

The devastating accident led Garlits to redesign the vehicle by placing the engine behind the pilot’s seat. “I started sketching a new rear-engine while I was in the hospital in Long Beach.”

It wasn’t the first time that drivers experimented with rear engines, but those machines tended to veer in competition and never performed to expectations. Garlits played with the bugs and found the trick: he reset the steering ratio from 6:1 to a slower 10:1.

Within 3 months, while still recovering, Garlits was out with rear-engine Swamp Rat 14. He lost the first race in 1971 at the same track and same lane a year to the day of his accident.

Though, 6 months later, he made history by driving Swamp Rat 14 to victory at the Winter Nationals in Pomona, California. Not only did a rear-engine win for the first time, but a safer vehicle outclassed the more dangerous ones.

Swamp Rat 14 is currently housed and on display at the Don Garlits Museum of Drag Racing in Ocala, Florida. Showcasing 200 vehicles on 65,000 sf of space, the facility is a popular destination for both families and dragster enthusiasts.

Like his cars, the 90-year-old legend refuses to slow down and visitors just might catch him in one of the two days during the week when he makes his way to the museum.