From savior to destroyer 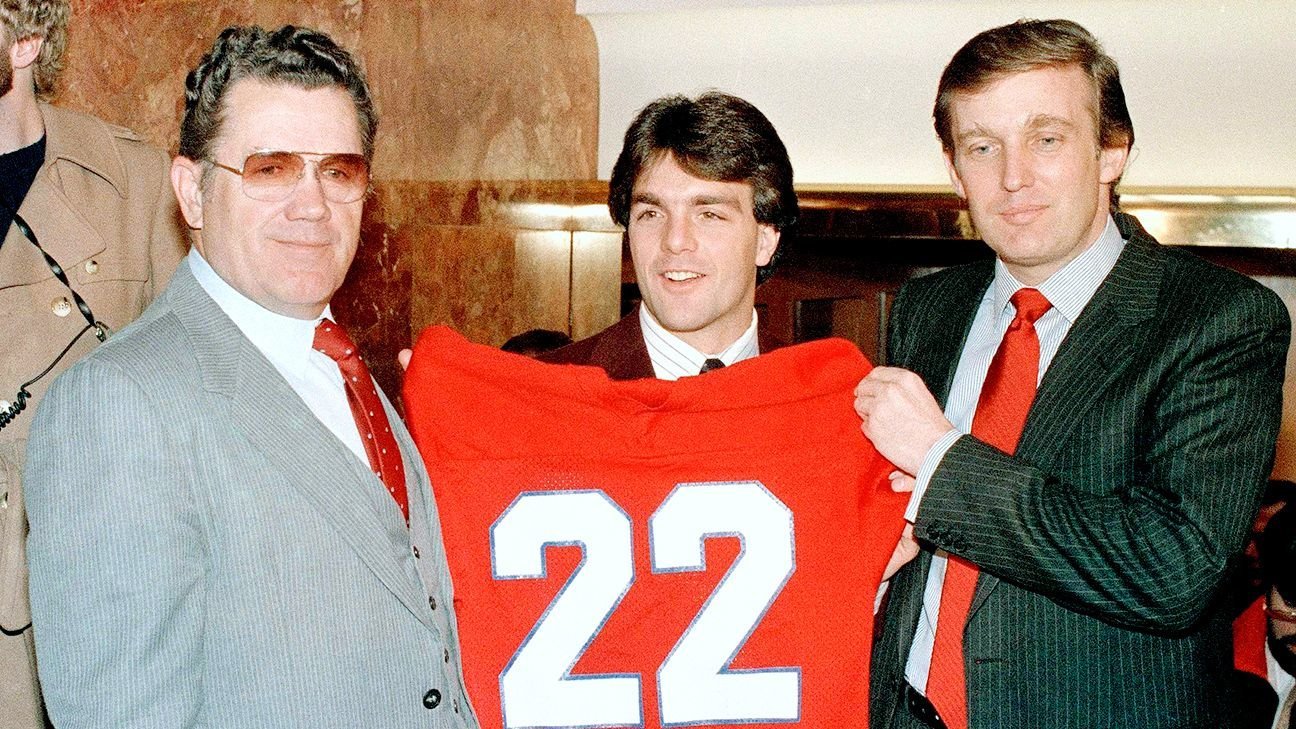 Before he became America’s 45th Commander-in-Chief, Donald Trump was many things in the business world, including owner of the New Jersey Generals, a football franchise that played in the upstart United States Football League (USFL).

Already a real estate mogul in New York City, the future President was now chasing the next big thing with a foray into professional football.

Over the next two years, his brief tenure in the USFL would have all the makings of a quintessential ‘Trumpian’ story: hardball business tactics sprinkled with media glitz and topped with courtroom drama.

The brainchild of New Orleans businessman David Dixon, the USFL was conceived as a Spring football league that would exploit the popularity of the sport with a season lasting from March to June. Dixon sold the idea as a perfect complement to the Fall schedule of the long-established NFL.

Packed with promising gridiron talent and a nascent following, the 12-team organization made a splash when it launched in 1983. Averaging 25,000 fans per game in its inaugural season, the fledgling league caught the eye of 37-year-old Trump who saw the potential behind the numbers.

In September of 1983, he purchased the New Jersey Generals from J. Walter Duncan, an Oklahoma oil & gas man who got tired of traveling east to watch his team play. With an investment of less than $10 million, Trump was now inside the board room of a professional football franchise.

But it wasn’t the league he was coveting. Trump dreamt big and wanted to be in the NFL.

Chet Simmons, veteran executive at ABC and President of ESPN, became the first commissioner of the USFL and the league managed to secure $13 million in broadcasting contracts with ABC and ESPN in its first year of play, or roughly $1.1 million per team.

To increase their fan base and expand TV coverage, owners knew they needed high caliber players but they were limited by the $1.8 million team salary cap outlined in the Dixon blueprint. Almost from the beginning, the group breached its own financial guidelines as teams went on binging sprees to recruit college players and lure existing ones from the NFL.

Between 1983 and 1985, they signed up 3 Heisman Trophy winners- Herschel Walker (Georgia), Mike Rozier (Nebraska) and Doug Flutie (Boston College). BYU quarterback Steve Young landed a record 10-year, $40 million contract with the Los Angeles Express, which he agreed to collect in $1 million annuity payments over 40 years to help out with the new team.

From the NFL, the USFL reeled in Cliff Stoudt (Steelers), Doug Williams (Buccaneers), Brian Sipe (Browns), and many others.

But behind the scenes, the league was suffering from more than just unfettered spending. Poor planning and mismanagement had some owners still searching for stadium leases, while others ran out of money quickly and couldn’t pay their players. Teams were sold, moved to other cities, or just discontinued.

If you shop on Amazon, support us at SPORTS HISTORY WEEKLY by clicking here and surfing for ANY of your personal and household needs

Initially, Trump was regarded by insiders as a savior when he entered the USFL with all the glamor and hype he could inhale from the media and exhale back to the tabloid-consuming public.

He announced his takeover of the Generals at the newly-completed Trump Tower on 5th avenue, the 58-story glass building that would see a parade of athletes, executives and government officials stream in and out right through to his Presidency.

When he sought out former Dolphins coach Don Shula for the Generals, Shula wanted a rent-free apartment in Trump Tower as part of his package. Trump refused and Shula was never hired, though other circumstances played in as well.

It was also at the posh building address that the Generals held their cheerleading tryouts with Donald’s first wife, Ivana Trump, and Andy Warhol sitting among the judges panel.

Players loved him and the NFL feared him. Lawrence Taylor, an underpaid star linebacker for the New York Giants, ended up tripling his salary with the Giants after Trump signed him to a future contract with the Generals, only to sell him back to the Giants for a $750,000 fee that Trump collected for himself.

The deal raised the credibility of the USFL and sent shivers through the NFL organization. On the field, Trump’s team was doing well. In 1985, they went 14-4 compared to the previous year’s record when they posted 6-12 under Duncan’s stewardship.

But for “The Donald”, the USFL was merely a ticket to something larger. He wanted to take on the NFL in their own calendar schedule, or force a merger between the two leagues that would end up doubling or tripling the value of his investment.

Trump remarked to ABC, “If God wanted football in the Spring, he wouldn’t have created baseball”. By the summer of 1984, he and a few other owners in the USFL convinced a reluctant majority to abandon the Spring playing schedule and move to the Fall starting in 1986.

Do you shop on Amazon? Support us at SPORTS HISTORY WEEKLY by clicking here and surfing for ANY of your personal or household needs

Along with the strategy to challenge the NFL for a piece of their market, the USFL also filed a $1.7 billion antitrust lawsuit against their league rivals, charging them with monopolizing television broadcasting rights and in some cases, denying access to stadium venues.

Pete Rozelle, Commissioner of the NFL, was named as one of the defendants along with all the NFL teams except for the Los Angeles Raiders whose owner, Al Davis, agreed to testify on behalf of the USFL. Trump himself testified along with a litany of television executives, in addition to prominent sports TV personality, Howard Cosell.

The highly publicized case went to trial in the Spring of 1986 and in July the jury emerged with a verdict against the NF, but awarded the USFL damages of only $3.00. Effectively, the NFL was found guilty of controlling professional football, but not the television market.

The USFL was banking on claims against TV revenues, but they ended up walking away with no monetary compensation.

Three seasons and nearly $200 million after it was founded, the USFL folded and never played another game. The ailing league was hanging on threads for most of its existence, but Trump’s aggressive gamble of taking on the NFL helped seal its fate.

For the deal master, the USFL was just another transaction in a long career of business ventures. In 2014, Trump made a $1.0 billion offer to buy the Buffalo Bills but lost out to Terry Pegula’s winning cash bid of $1.4 billion.

Had he succeeded in nabbing the Bills, Donald Trump might not have campaigned to become President Trump.