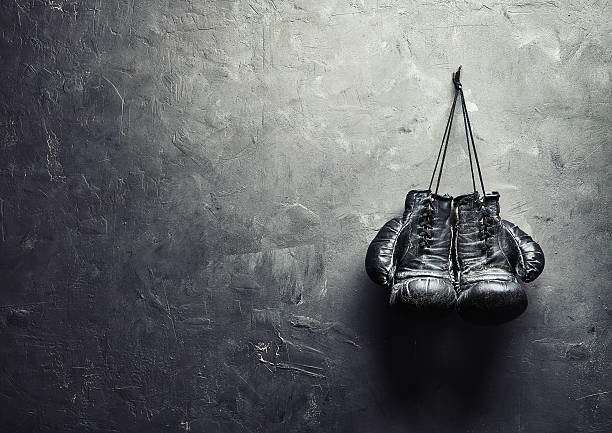 Blake’s mouthpiece went flying as a powerful right hook caught his jaw and sent a spray of perspiration into the air. He was thrown back against the corner, just where Kenny wanted him.

The 22-year-old went to work, hurling combination punches from all angles. Blake dropped to the canvas, one arm dangling on the ropes.

It was all over.

“That’s the way, kid…that’s the way!”, blurted Moe who sprung from his seat as soon as he saw Blake go down.

‘Boos’ echoed from the crowd in the arena, drowning out the few scattered cheers. Kenny was still an unknown fighter and the dollars that changed hands that night were mostly losses.

Moe climbed into the ring. He’s been training Kenny for almost two years and after a dozen fights, this was his best.

“You did great, Kenny!”, he shouted above the noise around him.

Kenny’s left eyebrow was cut open and his cheek slightly swollen, but those were merely souvenirs. His trainer knew it and he was thrilled at the prospect of moving his kid up to a bigger prize.

In the locker room, Moe handed $150 to Kenny, who was sitting on the bed stretcher with a towel over his shoulders. “I’m going to try and line you up with Bastini. That’s at least an $800 fight.”

Moe gave his kid a rest for a few days before calling him back to the gym. Since the night when Kenny knocked out Blake, Moe was brimming with plans and ideas. This could finally be it, his big break in the business.

In the past, he had a number of promising fighters but he could never take them to the next level. They either lacked discipline, fell on drugs and alcohol, or got in trouble with the police. Kenny was above those worries and barring a freak accident, he was money in the bank.

Do you shop on Amazon? Support us at SPORTS HISTORY WEEKLY by clicking here to purchase ANY of your Amazon products

“We’re all set with Bastini, four weeks from now,” said Moe.  He wrapped his arm around the sweaty young pugilist who was still catching his breath after a sparring session.

Moe felt as much a father figure to Kenny as a trainer. He looked out for him but at the same time, calculated his own ambitions. In 18 years of training, it was the furthest he had gone with any of his middle weight contenders.

The first time he spotted Kenny at Jack’s Gym, he immediately picked up on his rapid firepower and workout discipline. Kenny just needed to improve his footwork and build stamina to absorb the punishing blows.

Moe was known in training circles, but he never commanded the respect he thought he deserved.  But that was changing and it was evident in his confident strides and uncharacteristic cheerful demeanor.

At Jack’s, the regulars who never paid him much attention were now going out of their way to exchange a few words and share some laughs.

Sitting in Jack’s office, Moe was more talkative than usual. His face was beaming as he described how he negotiated the Bastini fight.

Jack was listening, curious and even suspicious, at how one of his veteran trainers was suddenly carrying on like a promoter.

Moe’s been a fixture at Jack’s forever and was always the go-to fisticuffs tactician. But this was a new side to him.

Moe and Kenny were having dinner across the street from Jack’s. It was the usual place they went to when they wanted to discuss something besides training.

The master delighted in watching his protege dig into a protein-packed salad and drink a glass of orange juice. His other fighters always seemed to live on burgers and fried chicken, satisfying a consumption rather than an appetite.

“I want to let you know that if you take out Bastini, then you’ll be entering a whole new league. Shady guys will start coming by, talking up deals and trying to take advantage of you.”

“So…what do I do?”, Kenny looked up from his plate with a puzzled face.

“I can handle everything, but we need to sign a contract. If I’m going to manage your fights, then you’ll need a new trainer too.”

Do you shop on Amazon? Support us at SPORTS HISTORY WEEKLY by clicking here to purchase ANY of your Amazon products

Moe drove Kenny back home, another one of his fatherly gestures meant to protect his investment. He always wondered how Kenny turned out to be such a balanced kid growing up in that neighborhood with a single parent.

After dropping him off, his mind strayed to visions of working the phones, facing reporters, and negotiating deals.

The highly-anticipated day finally arrived and the crowd was at least 4 times larger than at any of their previous fights. At Moe’s advice, Kenny tuned out the distractions and stayed focused.

Bastini had the height and reach advantage, but Kenny was quicker and more disciplined.  Following his usual strategy, he attacked Bastini with a barrage of punches and then stepped back to take a breather and assess the damage.

Sitting ringside, Moe was watching closely, his emotions churning with every move and counter-move. Between rounds, he climbed up to Kenny’s corner to check on his face and give him advice.

By the 8th round, Bastini was tiring out but he was still dangerous. Kenny noticed his fatigue and searched for an opening to move in for a kill. His first try was met with a hammer to the side and an uppercut that opened his nose.

Blood was dripping, but he wasn’t shaken.

He saw another chance and dove in. A hard right, followed by a hook and then another right sent his opponent wobbling.

A final blow and Bastini was sprawled on the floor.

Moe had Kenny's unsigned contract in his hand when Jack called. He said there was someone important in his office who wanted to speak with him.

Must be an out-of-town manager who wants to set up a match, Moe figured. Who could the fighter be and what’s the purse, he relished at the thought.

“I’m taking over the kid”, said Tony Marcie, a boxing manager from downstate. He reached into his pocket and revealed a contract with Kenny’s signature on the bottom.