On December 2nd, 1944, the Allies were on their offensive drive towards Germany, General Douglas McArthur was back in the Philippines, and the Army-Navy "game of the century" 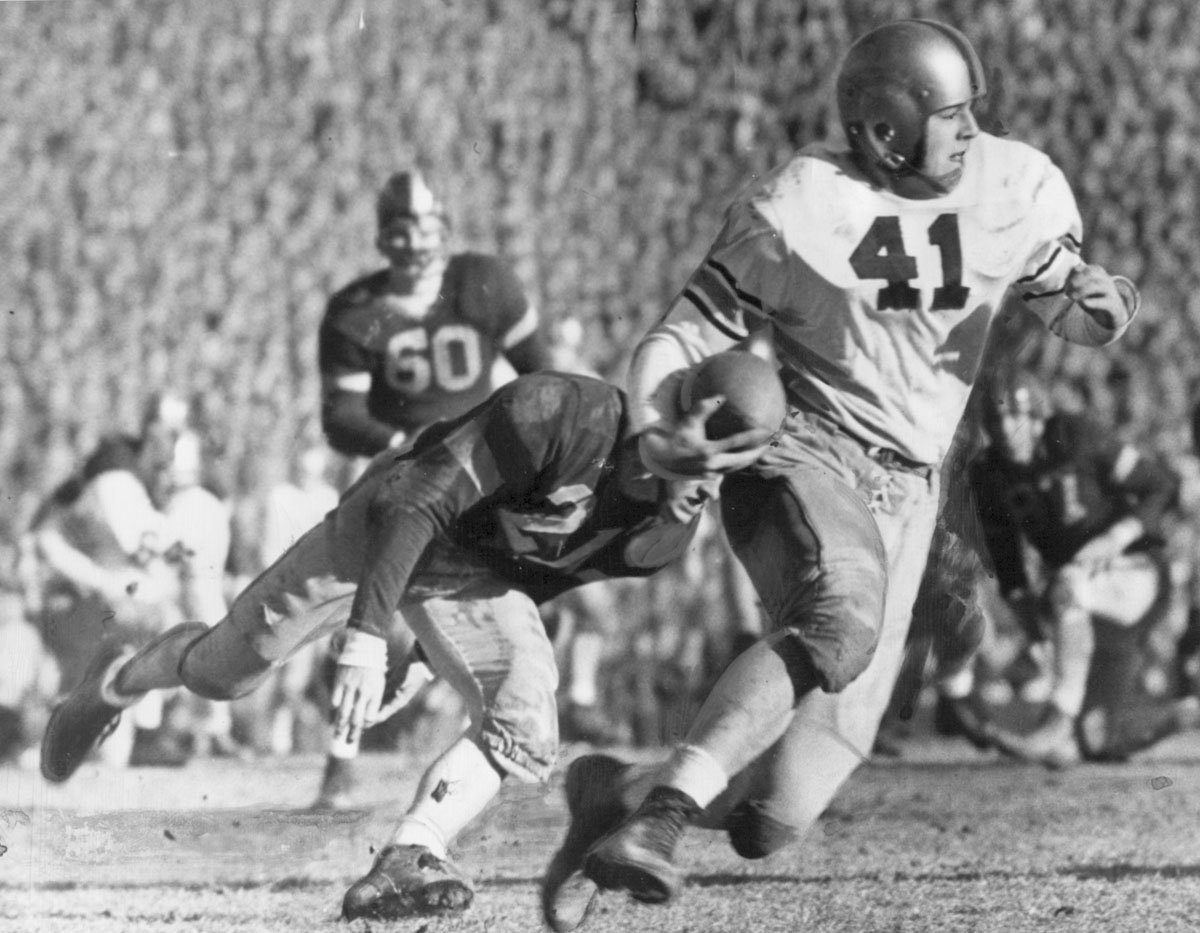 On December 2nd, 1944, the Allies were on their offensive drive towards Germany, General Douglas McArthur was back in the Philippines, and the Army-Navy “game of the century” was set for kickoff in Baltimore, Maryland.

For just a few brief hours on that frigid afternoon, the nation settled into a respite from a bloody conflict being waged across two oceans. At day’s end, the top-ranked Black Knights would rout the Midshipmen 23-7, spurring General McArthur to send a telegram from the Pacific: “The greatest of all Army teams. We have stopped the war to celebrate your magnificent success.”

It was one of the best football years for both military academies. At West Point, Coach Earl Blaik led the Black Knights to the top of the gridiron podium for what would be the first of 3 consecutive perfect seasons. In Annapolis, Navy alumnus and submarine commander Oscar Hagberg was in his inaugural year coaching the Midshipmen who dropped only 2 games that Fall.

Their historic rivalry dating back to 1890, the land and sea cadets were facing each other for the national title as their older uniformed brethren were plowing deeper into enemy territory in Europe and Asia. It was the 3rd encounter between Army and Navy since the attack on Pearl Harbor launched the country into war.

Navy had swept both prior matches, winning 14-0 in 1942 and 13-0 in 1943. Due to war-time travel restrictions, those games were also held at the schools’ respective campuses instead of the traditional mid-point location in Philadelphia. But this year, as the highly-anticipated football header reached a feverish pitch, President Roosevelt and his Cabinet had a different idea.

They moved the event to Baltimore’s Municipal Stadium to accommodate public crowds that would pay their way in with the purchase of war bonds. Nearly 67,000 spectators packed the mid-Atlantic venue, which was three times the size of Navy’s Thomson Field in Annapolis. Tickets were sold out within 24 hours and the game raised more than $58 million for the war effort.

On the field, the Black Knights unleashed their offensive weapons in the form of Felix ‘Doc’ Blanchard and Glenn Davis, the team’s backline duo who would prove to be a lethal combination. Nicknamed “Mr. Inside” and “Mr. Outside”, respectively, they set a then college record of 97 touchdowns and were tandem recipients of the Heisman Trophy- Blanchard in ’45 and Davis in ’46.

The Midshipmen answered the call with two of their own football standouts, tackle Don Whitmire and running back, Bob Jenkins. Both had started their college careers at the University of Alabama before the Crimson Tide dropped the program. As young men volunteered, or were drafted into the armed forces, ordinary colleges were sapped of their athletic talent while military institutes benefitted from a new influx of sportsmen.

Associated Press ranked the Black Knights #1 and the Midshipmen #2 in the country. Half of the AP’s top 20 list was comprised of service teams, or flight schools and training centers that competed in NCAA athletics while their players were waiting for deployment. Though, by 1944, most football colleges were back in action except for a few in the Pacific Coast Conference.

On game day, some 3,000 naval cadets pulled into Baltimore harbor by steamship from across the Chesapeake Bay. Meanwhile, 2,500 of their counterparts from upstate New York arrived by ocean transport on a sea sickness-induced trip to help them prepare for overseas assignments. Due to fears of German U-Boats lurking off the eastern seaboard, they were accompanied by 3 naval destroyers.

Prominent sportscaster Ted Husing made the play-by-play announcements as millions of war-weary Americans and battle-fatigued GI’s set their radio dials to the most heralded match of the year. On site were the usual top brass attendees, including Roosevelt’s Chief of Staff, General George Marshall. Seated on the 50-yard line was a contingency of disabled veterans who were admitted free of charge.

The Black Knights marched into the field with an 8-0 record, having vanquished their foes with wide margins, including knocking out Notre Dame 59-0 just a few weeks earlier. Over the course of the season, West Point had scored 481 points and allowed only 28; Glenn Davis was the nation’s leading carrier with 120 points. The Midshipmen’s record was 6-2 coming into the duel and their season posting was 229-65.

Amid blue and white fanfare, West Point kicked the ball to launch the game. The first half saw Navy’s Bob Jenkins leave the field with a head injury and Army’s Dale Hall dart for a 22-yard touchdown. The Midshipmen answered with a 1-yard drive into the end zone by Clyde Scott, but their scoring momentum stopped there. Army ended up securing the game in the 4th quarter with two touchdowns, a 10-yard scramble by Blanchard and a 50-yard run by Davis.

The Black Knights clinched the national title and completed the academy’s first undefeated season since 1922. They would enjoy two more illustrious years before the championship reverted back to the original powerhouse programs at Notre Dame and the big state schools. After 1945 when the war ended, Army and Navy never met again for the top prize in college football.

The gridiron stars of the mid-1940s went on to a life that was crafted for them at West Point and Annapolis. Army’s football Captain, Tom Lombardo, was even killed in action during the Korean war. Nevertheless, they didn’t go unnoticed by the NFL, which tried to draft them with mixed results due to their military commitments.

Doc Blanchard was selected by the Pittsburgh Steelers, Don Whitmire by the Green Bay Packers, and Bob Jenkins by the Washington Redskins. But only Glenn Davis (LA Rams) and Clyde Scott (Philadelphia Eagles) put in a few professional seasons in the NFL.

Leaving a rich legacy behind, yester-year's football cadets not only reminded Americans of peacetime normalcy during the dark hours of World War II, but they also forged the best teams their academies had ever produced.

IF YOU ENJOY OUR CONTENT, PLEASE  CONSIDER A VOLUNTARY DONATION TO SUPPORT OUR WRITING  & JOURNALISTIC EFFORTS.