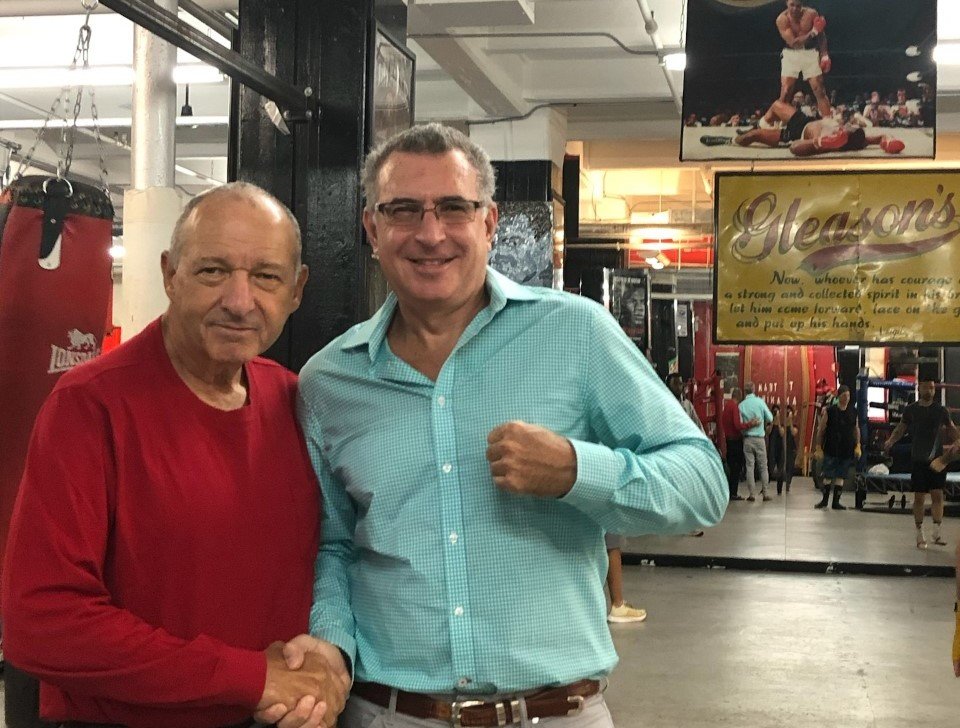 Situated in the trendy Brooklyn neighborhood of DUMBO, Gleason’s Gym is the oldest active boxing gym in America.

While it has changed locations several times since it opened in 1937, the name is still recognized as the training temple for generations of prizefighters ranging from Muhammad Ali, to Gerry Cooney, to Roberto Duran, and countless others.

26 movies were filmed at the storied haunt, including Martin Scorsese's ‘Raging Bull’ (1980) and Clint Eastwood's ‘Million Dollar Baby’ (2004), both of which won Academy Awards.

Television shows and music video crews have also sought out Gleason’s for their filming locations.

For over 30 years, owner Bruce Silverglade has been busy managing the venerable institution and preserving its name. Sports History Weekly sat down with Bruce and asked him to provide additional insights into Gleason's history and legacy.

Gleason's is probably the most famous boxing gym in America. Who founded it and where was it originally located?

The gym was founded by Robert Gagliardi in 1937 in Bronx, New York. It was an Irish section of the Bronx called “The Hub”.

Why do you think the name survived through the decades?

The gym survived through the ages because of the trainers and boxers who made it their home. The best trainers in the sport produced some of the best boxers in the sport and then it became contagious. Fighters want to be where other good boxers go and trainers want to work where the best fighters are.

How did you personally come to own this landmark institution?

After graduating from Gettysburg College, I became a manager for Sears Roebuck and Co. My hobby was boxing and I volunteered in the amateurs. Eventually, I became President of amateur boxing in New York. This brought me into the boxing gyms.

One day when I was in Gleason's and having coffee with the owner, he mentioned that he was looking for a partner. The next day I resigned from Sears and became a 50% partner in the gym.

Tell us about some of the renowned prizefighters who trained at Gleason's.

136 professional world champions have trained out of Gleason's Gym. Some of the more famous ones are Jake LaMotta, Muhammad Ali, Roberto Duran and Mike Tyson.

Can just anyone join Gleason's gym?

Yes, anyone who can afford the monthly fee can train at the gym. The average cost is $110 a month for the gym fee and $60 per hour for a trainer.

How much does it cost to train a fighter with recognizable potential in the ring?

The cost varies according to the fighter. Olympians and amateur world champions cost a lot of money. Kids that have no standing in boxing but desire to become prize fighters are very inexpensive.

Female boxing seems to be a growing sport ever since Muhammad Ali's daughter, Laila Ali, put on gloves over 20 years ago. Do you see ambitious women boxers at your gym?

The female boxers are very good and can hold their own with the men in intensity of training and skill levels. I have over 250 females training at the gym. 4 of the women are World Champions.

Are you working with anyone today who you think might become a household fisticuffs name?

There are no super stars training in New York at the moment. New York is no longer the center of boxing. There are many male and female boxers training in the city but their boxing opportunities are in other areas.

Our biggest name right now is Heather Hardy. She is well known in boxing circles but is not a household name.

Your gym trained Hillary Swank for her role in the Academy award-winning film "Million Dollar Baby" (2004). Tell us about that experience.

Hillary was a complete professional and trained harder than any other actor except Robert De Niro. She trained 6 days a week for 5 hours per day. She then spent her evenings hanging out with the boxers. She wanted to know what a boxer was like and that is why she won the Academy award.

What is your favorite boxing anecdote at Gleason's?

Muhammad Ali was visiting us some years ago to do a Vanity Fair article. I met his limo on the street by our side door to escort him up to the gym in our elevator.

As he stepped out of the car and walked toward me, he noticed a young woman walking toward us who was talking on her cell phone. Ali walked over to her, put his arm around her and proceeded to talk to the person on her cell phone.

This is the most famous person in the world and a boxer proving how great fighters are.

What is different at Gleason's today compared to 50 years ago?

In the old days, we only had professional or amateur fighters. Today, they represent only 15% of our members. About a third of our members are female, 40% are businessmen, and 12% are children.

Did you ever think of franchising the name?

I never thought about franchising. I like having the original gym. However, now that I am getting older, I would consider any offers brought my way.