Rise of Americans at the British Open 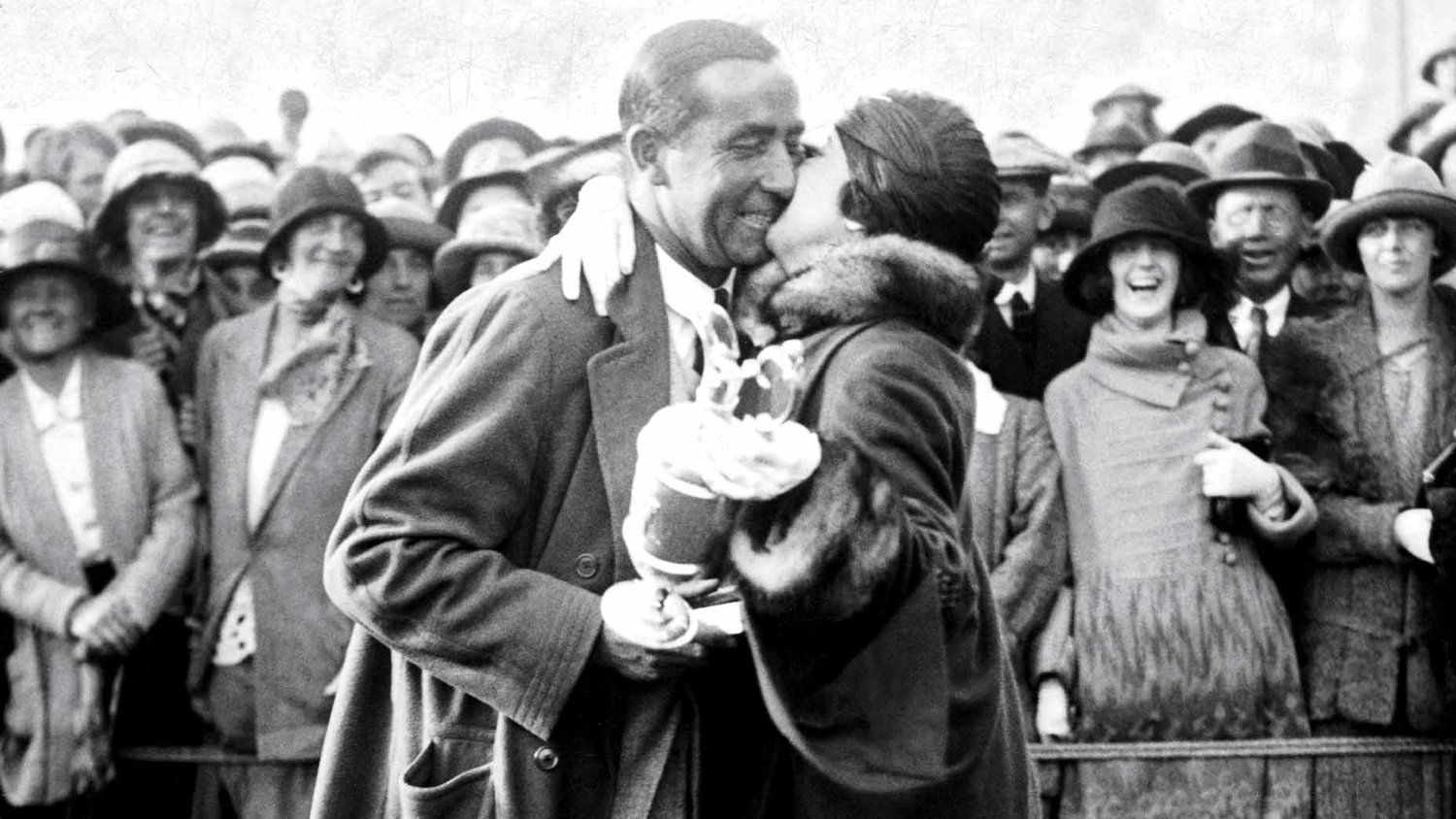 Walter Hagen getting a squeeze after winning the 1922 British Open. The first American-born golfer to raise the Claret Jug, Hagen and Bobby Jones would dominate the tournament for the rest of the decade.
Posted Sunday, July 17, 2022 8:00 am

In 2013, when Phil Mickelson hoisted the Claret Jug on a breezy day at Muirfield Golf Links, it wasn’t just a celebration of individual achievement.

The 142nd Open was the first time that Americans surpassed the Scotts as the winningest nation at the famed golf tournament.

On that Sunday, the California native shot one of the best rounds of his career to capture his 5th major. He was 5 strokes behind the lead going into the final match when he sprung ahead in the back 9 to win the championship with 2 birdies in the closing holes.

Lefty emerged with a final score of 281 (-3), or three swings ahead of runner-up, Henrik Stenson. It marked Mickelson’s first and last victory at the Open, but it also heralded  America's primacy at the oldest of the 4 majors.

Having launched the illustrious competition in 1860, the Scotts dominated the tournament for 30 years before John Ball, an English amateur golfer, became the first outsider to lay claim to the title.

But for the Americans, it all began at the 56th Open championship in 1921 with a steamship voyage sponsored by Golf Illustrated magazine.

Do you shop on Amazon? Support us at SPORTS HISTORY WEEKLY by clicking here to surf for ANY of your Amazon products

On September 27, 1920, the New York-based publication sent a letter to the PGA suggesting that the best chance for Americans to win the Open would be to send a team of 12-to-20 professionals. They recommended raising funds by popular subscriptions from different golf clubs across the country.

In their November, 1920 issue, Golf Illustrated lamented that Americans had excelled in almost all sporting competitions except for the Open, which continued to remain elusive.

Appealing to their readers, the magazine wrote: “If everyone gives a dollar, sufficient will be raised and this provides an opportunity for every patriotic golfer in the country to send a team to England in whose honor he will share.”

The following year, 11 players were selected to make the trip to St Andrews. Among them were Walter Hagen, Jock Hutchinson, and a transplant from England, Jim Barnes. Ahead of the big contest, a friendly match with their British hosts turned into what became the forerunner of the Ryder Cup, officially launched six years later.

Prior to 1921, few golfers from the U.S. had bothered crossing the ocean to participate in the Open. The voyage was long and the costs prohibitive.

Philadelphia native John McDermott was one of the few exceptions. A top player of his day and the first American-born golfer to claim the U.S. Open (1911), McDermott took up the challenge in 1913 at the Royal Liverpool Golf Club and tied for 5th place, the best the Americans had ever produced.

At the Old Course in late June of 1921, 160 golfers were vying for 80 qualifying spots and a chance to cash in on £75. The American core that was dispatched from the U.S. expanded by several new arrivals, including Bobby Jones.

In a 2-day event (4 matches) that stretched into a 3rd day, Jock Hutchison carded 296 to tie English amateur Roger Wethered before sealing his victory in a 36-hole playoff. The rest of the American field wasn’t far behind with Tom Kerrigan placing 3rd (298) and Walter Hagen coming in at T6 (302).

While the Yanks proved their worth for the first time on the British Isles, championship ties with the old country weren’t fully severed. Hutchinson was actually born at St Andrews and he only became a naturalized U.S. citizen in 1920.

The Glasgow Herald wrote of his victory: “St Andrews tonight is disposed to make the most of the fact that if an American has won he is an old St Andrews boy, and not a native-born son of the States.”

The following year, those words rang hollow when Walter Hagen became the first American-born player to lift the coveted trophy. At the Royal St George’s Golf Club, Hagen fired a 300 to defeat Jim Barnes and Scotland’s George Duncan by a single hole.

For the rest of the 1920s, Hagen and amateur prodigy Bobby Jones would overtake the Scotsmen and Englishmen in their own game and at their own links courses. Between 1922 and 1930, they seized 7 of the 9 titles.

Do you shop on Amazon? Support us at SPORTS HISTORY WEEKLY by clicking here and surfing for any of your Amazon products

The American onslaught came to an end with the start of the Great Depression as economic hardship kept golfers from traveling abroad. A new crop of talented English players such as Henry Cotton and Alf Padgham would wear the crown until the outbreak of WWII.

Hagen and Jones’ decade-long run at the Open was also the culmination of their golfing careers since neither won another major again. Their legacy firmly planted on the shores of Great Britain, the Yanks also lowered the average score of the tournament.

Jones epitomized the ‘Roaring 20s’ on the golf course when he roared to an Open record in 1927, swinging a 285(-7) in a wire-to-wire finish at St Andrews. Defending his title, he beat out England’s Fred Robson and Jersey’s Aubrey Boomer by 6 strokes.

The Glasgow Herald praised his achievement: “…his phenomenal performance today has crowned a golfing career which, for a young man of 25, belongs to the world’s romances.”

The Scotts, having last won in 1920, remained absent from the winner’s circle until 1985 when Sandy Lyle closed out with a 282 (+2) at the Royal St George. Paul Laurie reclaimed the Scottish banner in 1999 when he marched from a record 10-hole deficit to take the tournament in Carnoustie.

Notwithstanding Arnold Palmer's back-to-back wins in 1961 and 1962, the next wave of victories from North American golfers came in the 1970s and early 1980s with Tom Watson, Jack Nicklaus and Lee Trevino.