A Scorecard Blunder at The Masters 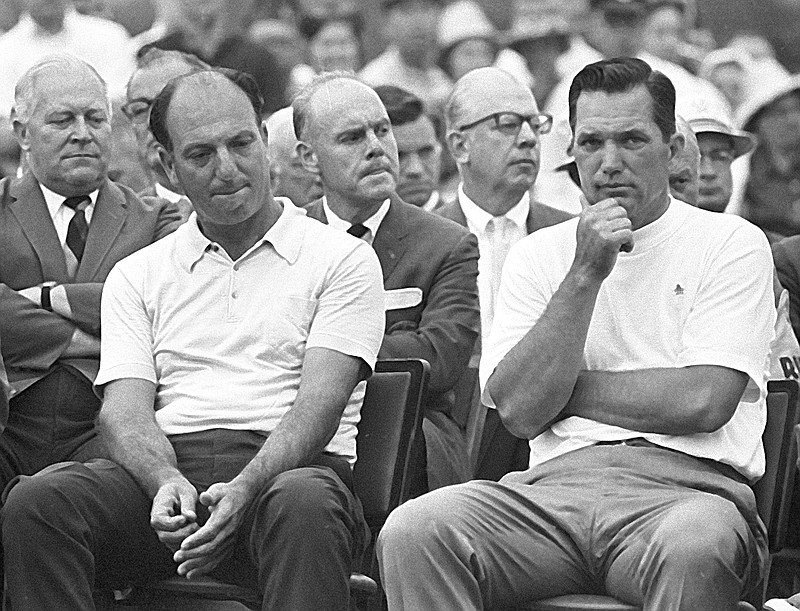 Roberto De Vicenzo (left) and Bob Goalby at the closing of the 1968 Masters. De Vicenzo miscued on his own scorecard, stripping himself from a playoff against Goalby who was declared winner of the tournament.
Posted Sunday, April 10, 2022 8:00 am

The day after the final round of the 1968 Masters Tournament, the front page of The Augusta Chronicle screamed: “Goalbie gains Masters title, De Vicenzo errs on score”.

In one of pro-golf’s greatest goofs, Argentina’s Roberto De Vicenzo miscued on his own scorecard, stripping himself from a playoff against Bob Goalby, the man who would end up wearing the green jacket.

Adding to the memorable blunder, it happened on De Vicenzo’s birthday. As he walked the course on that Easter Sunday, the Argentine was greeted by exuberant fans chanting “Happy Birthday”, oblivious to what fate had in store for him at the end of the day.

De Vincenzo died in 2017 at the age of 94 and Bob Goalby passed away this year at 92. Both put in exciting and productive years into the game of golf and despite the lingering controversy that followed them throughout their careers, the Argentine never begrudged his opponent’s victory.

But as late as 2018 and leading up to the 50th anniversary of his victory in Augusta, the retired American golfer and NBC commentator was still being chased by the media to retell the story.

In an interview with the Desert Sun four years ago, Goalby said: “It was unfortunate for Roberto, but it was equally unfortunate for me.” He was referring to his ‘faux’ victory in Augusta, which ended up defining his career and to a certain degree, De Vicenzo’s.

Teeing off at the 32nd Masters Tournament on April 11, 1968, De Vicenzo and Goalby were up against a competitive field that included prior course champions Jack Nicklaus, Arnold Palmer, Gary Player, and Sam Snead.

Lee Trevino was making his Masters debut, while old-timers Ben Hogan and Gene Sarazen, still swinging the club, were invited but did not play.

De Vicenzo was coming off his sweetener at the 1967 British Open where he was absent from the leaderboard in the first round, but then climbed to T3 on day 2, reached first place on day 3, and was declared winner on day 4 with a score of -10 (278), beating out Jack Nicklaus by 2 strokes.

At age 44, he ended up becoming the 20th century’s oldest player to claim the Open and the first Argentine. Though, it would prove to be his only major in an illustrious career that saw 229 international titles, including 7 on the PGA Tour.

Goalby entered Augusta as a lesser known participant with second place finishes at the PGA Championship (1962) and U.S. Open (T2, 1961). The son of a coal miner, he grew up in Belleville, Illinois and briefly attended the University of Illinois on a football scholarship. He opted for golf and turned in a respectful career with 11 PGA Tour wins by the time he retired.

Mickelson at 50, But Watson Almost at 59- A bogey on the 18th denies Watson a fairy-tale upset

Tied for 7th going into Sunday, De Vicenzo launched on a positive note by landing an eagle on the par-4 first hole. He then birdied three shots and parred five to settle for -9 at the half mark. Goalby, tied for 2nd when he stepped up to the tee, managed three birdies and six pars for a -8.

Entering the back 9, the globetrotter from South America was leading the pack with Goalby trailing by a single stroke. But as in most golf tournaments, the drama would reach its crescendo in the final holes of the final day.

Third round leader Gary Player fell back on Sunday after swinging a par 72 to finish off his standing at T7 with (-6) 282. Nicklaus, whose momentum was eroded the day before, regained some of the loss but could only muster a T5 with (-7) 281. Arnold Palmer, 4 times champion of the grounds, found the water three times on Friday and missed the cut for the first time at Augusta.

Clearing the 14th hole, Goalby and De Vicenzo were now even and dueling about 40 minutes apart.

The Argentine picked up a point on the 15th and then tapped another two-foot birdie on the 17th. Pressure got the best of him on the 18th when he hooked his second shot into the crowd and came in with a bogey, though still finishing the round with an impressive 65.

A Golf Tournament for the Ages- Hogan, Palmer, and Nicklaus do battle at the foot of the Rocky Mountains

Goalby briefly took the lead after sinking an eagle on the par-5 15th, but then three-putted a bogey on the 17th to match his counterpart’s overall score of -11 (277). It appeared the pair were now heading for a Monday playoff.

But a bookkeeping error would muddle those plans. Tallying the scorecard, De Vicenzo’s partner, Tommy Aaron, recorded a par on the 17th instead of a birdie. Flustered and in a mental fog over his only bogey of the day on the 18th, De Vicenzo overlooked the mistake and signed off on the card.

Aaron discovered the error but it was too late. After follow-up discussions, Hord Hardin, President of the U.S. Golf Association and chairman of the rules committee, publicly came out with the bombshell. Evoking the Rules of Golf, the erroneous score could not be corrected since the scorecard had already been signed.

Rueful and self-pitying, De Vicenzo famously remarked at the press conference, “What a stupid I am!” He would forever place the blame on himself, saying “It is my fault. It is not Aaron’s fault…I play golf for 30 years all over the world and I never do this before.”

A potentially missed historic opportunity, it wouldn’t be until 41 years later that Angel Cabrera became the first Argentine to capture the Masters.

For his part, Goalby was cast as the villain for years with fans accusing him of stealing the tournament and that he should have offered De Vicenzo a playoff for the title despite the rules.

Speaking to The Los Angeles Times in 1989, Goalby said: “…I have forever been singled out as the guy who won the Masters because of some damn clerical mistake. I don’t think I ever got credit for what I did that week.”