Tal Brody was a college basketball star in the 1960s, playing at the University of Illinois and winning the 1965 Big 10 championship. 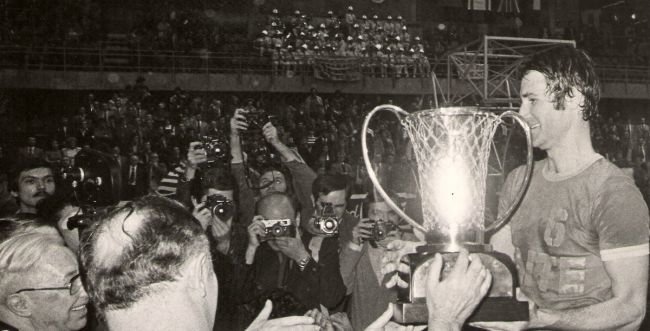 Tal Brody displays the EuroCup trophy after leading the Maccabi Tel-Aviv basketball team to victory at the 1977 European Cup championship. An emotional moment for the country, it was Israel's first win at the premier tournament for club competition.
Posted Sunday, October 17, 2021 8:00 am

Tal Brody was a college basketball star in the 1960s, playing at the University of Illinois and winning the 1965 Big 10 championship. That year, he was drafted into the NBA by the Washington Bullets (Wizards) but instead, he opted to follow a different calling.

Tal moved to Israel to play for Maccabi Tel-Aviv and help build the country’s basketball. As captain of his team, he led Maccabi to victory at the 1977 EuroCup championship, defeating the mighty Soviets in a David & Goliath face-off that became known as “Miracle on Hardwood”.

It was the first victory for an Israeli team at the premier club tournament and a tremendous morale booster for a tiny nation that was always teetering on the edge of war. Tal’s achievement is still celebrated today and was even captured in a 2016 documentary film “On the Map”, produced by Nancy Spielberg, sister of the famed director Steven Spielberg.

Tal's contribution to American basketball didn’t end in college either. Drafted into the U.S. military during the Vietnam era, he also played for the armed forces and represented Team USA at the 1970 World Championships in Belgrade. Today, he serves as Israel’s Ambassador of Goodwill and helps organize games between the NBA and Israeli teams.

Sports History Weekly asked Tal to share his story and shed some highlights on his basketball life.

You were an All-Star high school basketball player in Trenton, New Jersey where you grew up. Besides your height, did you inherit any sports talents from your parents or other family members?   No, I was just a naturally-gifted athletic kid.

Who were your basketball heroes growing up?  I admired Bob Cousy, Jerry West and Oscar Robertson.

You played point guard for the University of Illinois and won the Big-10 championship in 1965. As a Jewish kid playing high level college basketball back then, were you taunted by other players or fans?  No, I didn’t run into any situations like that.

After college, you were drafted by the Washington Bullets (Wizards today), but instead you decided to stay in Israel after leading the U.S. to gold at the Maccabiah Games. Was it a difficult decision to turn down a career in the NBA?  Yes, but the challenge of taking Israeli basketball to the top had a bigger appeal for me.

That same year, future Senator Bill Bradley deferred his decision to play in the NBA as well. You seem to have a lot in common with him: similar age, both were New Jersey high school and college All-Stars, and both played basketball with a higher purpose in mind. Even the way your names ring- Brody & Bradley. Were you friends with him at all over the years?  We knew each other from a distance, since he played with Princeton in the Ivy League and I played with Illinois in the Big Ten. I always respected Bill for his accomplishments and met him at the NBA All-Star Weekend a few years ago.

What was the basketball scene like in Israel when you arrived to play for Maccabi Tel-Aviv in 1966?  The conditions were very primitive, but I knew that if we succeeded then they would improve more and more with our success.

Prominent Israeli politicians and military generals started coming to your games, including Defense Minister Moshe Dayan. How did you feel knowing that you were elevating the caliber of Israeli basketball and the country’s morale?  This was the major factor why I stayed in Israel, since I saw my presence there as more than just playing basketball. It was of major importance to the morale and spirit of the country in difficult times.

Israel's biggest international sports moment came when you led Maccabi Tel-Aviv to victory at the 1977 FIBA European Champions Cup (EuroLeague). In the semi-finals, you beat the favored Soviets who at the time were boycotting Israel, and then at the final you defeated an Italian team by a single point. Does that miracle still resonate today with Israelis?  Yes, it does. That 1977 season is also memorialized in the 2016 documentary film “On the Map” that was directed by Dani Menkin and produced by Nancy Spielberg.

After dispatching the mighty Soviets on the court, you screamed in elation to reporters on the mic: "We are on the map!...and we are staying on the map!...not only in sports, but in everything!" What was the reaction from the world media to that enduring line?  They admired us and felt inspired.

In Israel, you served in the army but most people don't know that you actually came back to the U.S. to serve in the American military as well during the Vietnam era. How was that experience and did you play ball in the forces?  When I was called up, I knew it was my duty and obligation to serve the country that educated me and was home to my family and friends. I was fortunate to be chosen to the All- Army and Armed Forces teams and then 7 of us were also selected to play for Team USA at the 1970 World Championships in Belgrade. Bill Walton joined our selection team as well.

Israel today is a modern, developed country with a vibrant sports scene. It is also a very diverse society encompassing Jews, Arabs, and Christians. Do Israeli Arabs take an interest in playing basketball?  Yes. They play and participate in most sports, and also play in the leagues and the different National Teams.

Today, you are Israel's international Goodwill Ambassador. As you travel around the world and meet people, what do you tell them about the country in the context of international sports?  I tell them that we are the sports capital of the Middle East.