Jackie Mitchell Was A Trailblazer 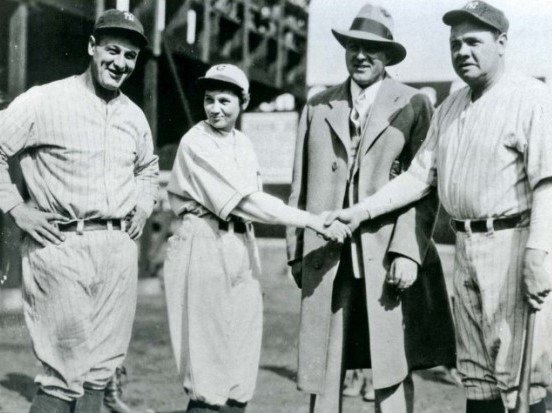 “Ruth and Gehrig Struck Out By Girl Pitcher”. Such was the New York Times sports headline on April 3rd, 1931. So, who was the mysterious young woman who retired baseball’s most fearsome hitters? Her name was Jackie Mitchell, a spirited athlete with baseball in her blood. She played in the 1920’s and 30’s, encouraged by her father who introduced her to the sport at an early age.

A lefty with a sidewinding pitch, Jackie was also fortunate to have as her next-door neighbor Dazzy Vance, a future Hall of Famer who spent most of his career with the Brooklyn Robins/Dodgers. Vance taught the young girl his “drop ball”, a hard to hit sinker.

At 17, the talented hurler worked her arm for the Engelettes, a women’s squad run by Joe Engel who owned the Chattanooga Lookouts, the AA professional team. Looking to raise gate receipts at his stadium during the depression, Engel signed up Jackie to a one-year professional contract, among the first for female ball players.

The young prodigy got her fame when the press announced that the New York Yankees were stopping in Chattanooga on their way back from Spring training to play an exhibition game with the Lookouts. Engel was orchestrating one of his publicity stunts and the papers ran headlines like “Girl Will Hurl To Babe Ruth”.

The match was scheduled for April 1st but it rained that day, so Jackie pitched her first professional game on April 2nd, becoming just the second woman to accomplish that feat. She took the mound in the first inning, relieving starting pitcher Clyde Barfoot, and immediately faced Babe Ruth and Lou Gehrig, the third and fourth place hitters.

At the plate, Ruth tipped his cap to her and the lady went to work. She quickly had a 1-2 count versus “The Sultan of Swat” and her next pitch was a called third strike. Legend has it the side-armed youngster threw all sinkers and the umpire checked the ball during the count. Ruth also got into a verbal spat with the umpire and threw his bat on the ground in fury. The crowd of 4,000 was entertained to say the least, delivering a long-standing ovation.

Next up, Lou Gehrig struck out on three pitches as well. After walking her third batter, Jackie was removed from the game. The Lookouts lost the match 14-4 and Ruth said the next day that women are “too delicate” to play baseball and it would kill them.

Some thought the two sluggers struck out on purpose. Teammate Tony Lazzeri said they were legit at-bats. How could a woman strike out two of the best players in Major League Baseball? Was it an April Fool’s hoax cooked up by Engel, the “Barnum of Baseball”? The publicity stunt turned into a great preseason story.

Baseball Commissioner Kenesaw Landis wasn’t amused and voided Jackie’s contract shortly afterwards, claiming that women were unable to play the game because it was “too strenuous”. The young heroine was undeterred, later barnstorming with the “House of David”, an eccentric group of ballplayers who had long hair, beards and claimed to abstain from drink and sex.

But Jackie was a serious player who came to be frustrated with her reputation as a side-show antic. On occasion, she even wore a fake beard when playing with the “House of David”. Disillusioned, she retired at 23 and later refused to play for the All-American Girls Professional Baseball League when it was formed in 1943.

Professional baseball remained a glass ceiling for women and in 1952, MLB outright banned women from playing, a policy they maintained for the next four decades. In 1993, Carey Schueler became the first woman to be drafted into the league when the Chicago White Sox picked up the left-handed pitcher.

Jackie Mitchell is still talked about today as one of the female pioneers in the sport. In 1982, at the age of 68, she threw the ceremonial first pitch at the opening game for the Lookouts. Jackie always insisted that her pitching genuinely put away Ruth and Gehrig but whether it did or not, the lore makes for an inspiring slice of Americana.

Russ Cohen is the author of “Pioneers of Baseball’, his eighth and latest published title. The book is available for sale on our site. Company website: sportsology.net Email contact: rcohen@sportsology.net