A compilation of interviews with a living legend in sports journalism 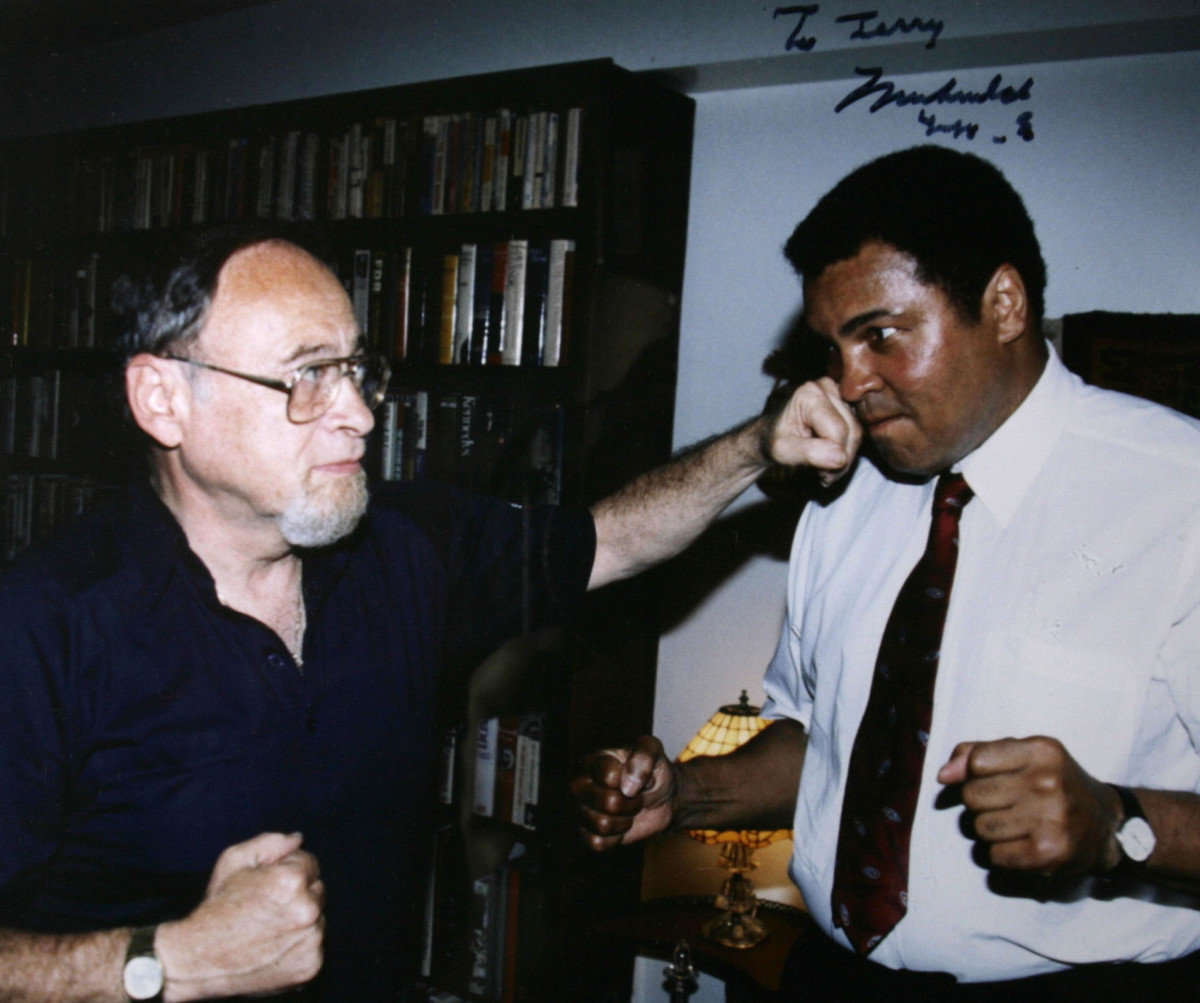 Sports journalist Jerry Izenberg joking with Muhammad Ali with whom he had a special relationship that went beyond that of a reporter and a pro athlete.
Posted Sunday, December 4, 2022 8:00 am

A giant in sports journalism and one of the last remaining links to the craft’s golden age, Jerry Izenberg began his career when New York was still home to 3 professional baseball teams.

As a young writer, the New Jersey native joined the Evening News (Patterson, NJ) and the Herald Tribune before spending the bulk of his years with The Newark Star-Ledger where he penned 5 columns a week for 36 years before cutting back to 4 in 1999.

For decades, Izenberg engaged his readers with eyes and ears that spanned all sports, from boxing and horse racing to basketball and football. By virtue of his longevity and reputation, he seemed to be everywhere and know everyone in the business.

The nonagenarian covered 53 Super Bowls beginning with the inaugural contest in 1967 through his last one in 2019 (SB LIII).

He also authored 13 books and wrote, narrated, or produced 35 network television documentaries. In 2000, he won the Red Smith Award for outstanding sports journalism and was also inducted into the National Sportscasters and Sports Writers Association Hall of Fame.

His last book, “Once There Were Giants: The Golden Age of Heavyweight Boxing”, was published in May, 2021 and includes a foreward by Manny Pacquiao.

“Peerless prose”, “streetwise insights”, and “unbridled enthusiasm” are just some of the terms used by fellow writers and readers to describe Izenberg’s brand of old school journalism.

Among his legions of fans is Ed Odeven, Sports Editor at the JAPAN Forward. Growing up in the Garden State, Odeven ingested his hero’s columns regularly, admiring “his eye for detail, his love of the language, his sports knowledge, and his intellectual curiosity.”

Several years ago, Odeven took it upon himself to tell Izenberg’s own story and career highlights, which like his subjects, offer a slice of 20th century Americana.

In December, 2020, Odeven released “Going 15 Rounds with Jerry Izenberg: A Collection of Interviews with the Legendary Columnist.”

“I was inspired to write the book because Jerry spoke so eloquently and about so many topics about his life, his mentors, his father, many of his favorite sports stories, and more.”

In addition to his own Q&A sessions with the iconic sports scribe, Odeven reached out to dozens of renowned journalists and broadcasters and had them weigh in with anecdotes and opinions.

Below is an excerpt from Odeven’s book, which recalls Izenberg tagging his kids along on a trip to Pennsylvania to cover Muhammad Ali’s training camp:

The bond between Jerry Izenberg and boxer Muhammad Ali extended beyond their jobs. It was truly unique, far beyond the typical relationships between journalists and pro athletes.

It’s 1974, and Izenberg is a recently divorced father. (At the time, Izenberg became the first father in New Jersey to be awarded sole custody of his children, he said.)

He also happened to be doing work in preparation for Ali’s fight in Kinshasa, Zaire, against then-world heavyweight champion George Foreman — The Rumble in the Jungle.

Izenberg’s children, Robert, 11, and Jenny, 8, had just come to live with him two days earlier, so his parental instincts are put to the test. “I’m driving to Deer Lake (Pennsylvania), and I’ve got my daughter and my son in the car,” Izenberg recalled.

BUY- 'Once There Were Giants' by Jerry Izenberg

It was a challenging set of circumstances. Izenberg had plenty of work to do. In his heyday, he wrote five columns a week — plus numerous books and magazine articles. And over the years, he was involved in the narration, production and writing of 35 TV documentaries, among them the Emmy Award-nominated “A Man Named Lombardi,” about the inimitable NFL coach Vince Lombardi.

En route to Deer Lake, Izenberg is confronted with figuring out how to keep his children occupied while he is covering Ali’s training camp.

“He is crazy about television and I’m making a television show at the same time,” he remembered about his son, and gave him these instructions: “You can walk around with the crew; they know who you are. Don’t worry about it.”

One down, one to go.

His daughter says, " 'What am I gonna do?' " Izenberg recalled.

“Well, you go to Aunt Coretta (Ali’s paternal aunt) and tell her that you are the official water girl of the Jerry Izenberg television crew and she’ll give you a couple of bottles of water and you follow them around, but you keep your mouth shut.

“Then she proceeds to say, ‘I hope George Foreman knocks his block off.’ ”

“I said, ‘You’ve got to remember something: Both of these men are my friends, No. 1. This is a business, No. 2. It’s not a war, so they’ll do what they do to make their money. And you are going to keep your freakin’ mouth shut when you get in there.’ ”

That set the stage for the TV cameras to get rolling.

“So they go off and do what they do and we do the show,” Izenberg said, “and now we are in his locker room and we are talking very softly, and he says to me, ‘Is that your son?’ ”

Ali asked Izenberg what his son’s name was, then walked over to him.

“He put his arm around Robert and says, ‘Robert, I want to tell you something. You have come to live with a great man who loves you. Learn from him.’ And he gets up and walks away,” Izenberg remembered.

“Well that’s a helluva thing to do for me,” he went on. “The kids have been scared. They came to live with me two days earlier.”

“So, is this your daughter here?” The Greatest inquired in a quiet tone.

“When you’re 7 years old, 8 years old, tell me what you think we’re talking about. She thinks I’m ratting her out about what she said about him,” Izenberg pointed out.

“So, she’s trying to put her shoulders into the molecules in the wall, right? Because she thinks I’m ratting her out.”

Izenberg’s daughter walks over to them slowly, and then…

“He swoops down, and he’s 6-3, and she wasn’t even 5 feet then,” the legendary columnist said. “He picks her up and holds her over his head. Now she has lost the total power of English. She cannot speak one word that means anything.”

The conversation shifted back to Ali.

BUY- 'No Medals for Trying' by Jerry Izenberg

“Is that your daddy?” he asked her.

“Is that your daddy?”

Ed Odeven is a Tokyo-based veteran sports journalist and currently the Sports Editor at JAPAN Forward. From 2006-2020, he was the Japan Times’ chief basketball reporter and lead journalist at the Beijing and London Olympics. “Going 15 Rounds with Jerry Izenberg” is his first book.