Paddling the river as a metaphor for navigating life 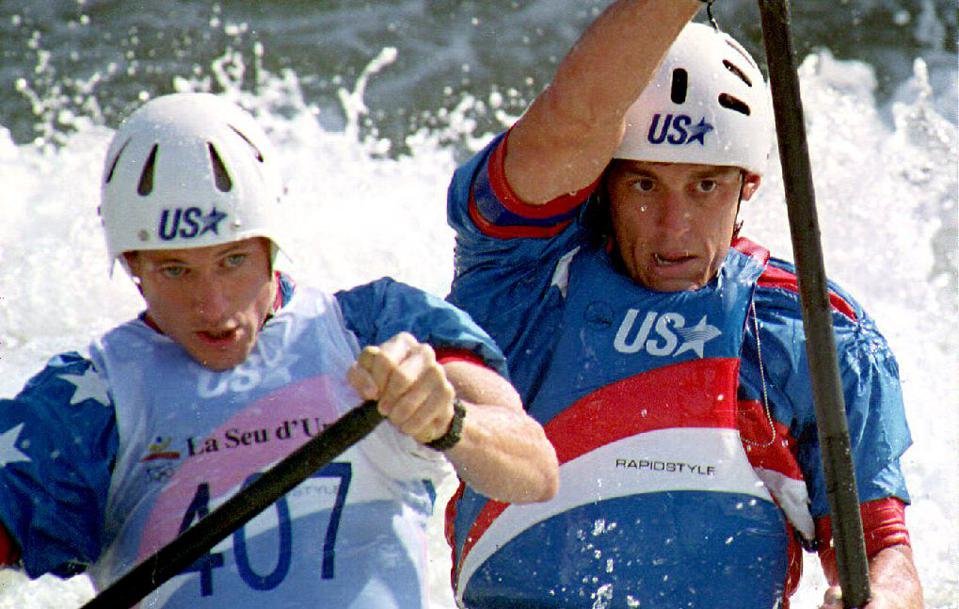 Joe Jacobi (right) and Scott Strausbaugh navigating the whitewater course at the 1992 Olympics in Barcelona. They remain the first and last American team to win gold in that Olympic event.
Posted Sunday, July 10, 2022 8:00 am

“The river never stops flowing and you can’t call time out,” says Joe Jacobi, slalom champion who won gold at the 1992 Olympics in Barcelona.

It’s 30 years since Jacobi and his paddling partner, Scott Strausbaugh, captured the top prize in the 2-man slalom competition. To date, they remain the only Americans to hold a gold accolade in that discipline.

Passionate about the river and the outdoors in general, Jacobi has remained close to the sport. He even adopted La Seu d’Urgell- site of the Olympic rapids where he made history- as his permanent home.

In 2000, Jacobi was named “Paddler of the Century” by Paddler Magazine and a decade later he assumed the helm at USA Canoe/Kayak, the organization that hosts, sanctions, and promotes the sport under the Olympic umbrella.

This year, Jacobi released ‘Slalom’, a book that offers life lessons from his 40+ years behind the paddle. Coming across as an athlete-philosopher, the former Olympian compares the decisions we make in life to the way we navigate an untamed river.

Frequently, we ask similar questions: How can we align with strong forces of uncertainty, or move with more agility and optionality, or confront large obstacles?

Each of the 6 chapters, which he breaks down into River Classes, is designed to transfer something technical about the river to something clear and simple in life.

“The river is my coach. It has taught me everything I know,” he reflects in conversation with Sports History Weekly.

Born and raised in the Washington, DC area, Jacobi grew up canoeing and kayaking on the Potomac River. He spent his summers at Valley Mill Camp, which specializes in water recreation.

Do you shop on AMAZON? Support us at SPORTS HISTORY WEEKLY by clicking here and surfing for ANY of your AMAZON needs

At age 10, he was the first in his group to perform the Eskimo Roll, a maneuver that uprights a kayaker from below the water line. At 13, he started winning regional championships.

His mentor and idol was Jamie McEwan, scion of the family that owned Valley Mill. In 1972, Jamie won bronze in the C-1 slalom (1-person canoe) when it was first contested in the Olympics. “Jamie was a living legend in our sport,” he recalls.

At the Barcelona Games, Jacobi and his partner emerged as the unexpected winners in the C-2 slalom class. In a tough field of 17 boats, they beat out the two favorites from Czechoslovakia and France.

The American duo led in both runs that are entered for a final score, clocking 2:04.82 and 2:02.41 with no time penalties. Trailing in 4th place behind the Czechs and French were Jamie McEwan and Lecky Haller.

It was the first time in 20 years that slalom was back in the Olympics. After 1972, the event was discontinued since host countries lacked the natural aquatic conditions, or the financial resources to build whitewater facilities.

Canoeing and kayaking were first introduced at the 1936 Olympics in Berlin as calm water sprints. Those races take place in designated lanes with 1-person, or 2-person boats. In canoes, rowers kneel and use single-blade paddles, while in kayaks they sit and employ dual-blade oars.

Americans never fared well in the water borne crafts, which were dominated by Europeans from the beginning.

In the sprint, Germany and the former USSR are tied for the gold at 29 each, followed by Hungary at 28. The U.S. ranks 10th on the list with 5 gold.

In the slalom, Slovakia leads the podium with 8 gold, followed by France (7) and Germany (5). Once again, the U.S. sits in 9th place with just 1gold.

The roots of slalom in North America took shape in small rivers on the East Coast, not in the raging waters of the Western U.S. In Appalachia, whitewater enthusiasts turned easy rapids into challenging courses by adding gates and obstacles.

“You’re transmitting the energy from your body through the paddle to propel forward,” says Jacobi.

Lifting weights to build upper body strength is just part of the training regimen. Much of that also involves developing dynamic strength in odd positions, since the river always tosses rowers off-balance.

In competition, strategies vary among athletes. For example, the Germans use their size and power to “conquer” the river. In contrast, Jacobi sees the river as a “dance partner”, preferring to work with it rather than fight against it.

Do you shop on Amazon? Support us at SPORTS HISTORY WEEKLY by clicking here and surfing for ANY of your AMAZON needs

Though, most important is having a sense for the water flow. Managing river turbulence is an art and a skill. Paddlers need speed, agility, and maneuverability to thrust the boat, whether it’s with the flow or against it.

“There’s a real touch and feel for the water,” Jacobi emphasizes, and that instinct is critical to winning competitions.

Unlike other Olympic events that were plagued by substance abuse scandals, performance-enhancing drugs never helped anyone in the canoe slalom, since knowledge of the water itself is key.

Whitewater canoeing and kayaking as recreations remain more popular on this side of the Atlantic, but the competitive edge of the sport is more developed in Europe.

Jacobi attributes it to the European club system that helps foster greater interest from a young age. In France, unlike in the U.S., the sport is integrated into students’ physical education.

Jacobi wants to see more kids in America get involved in these river activities and in the process, appreciate nature more.

As a former Olympian, he also stresses that the best way to honor athletes of his discipline is to put their names in a kayaking school rather than expend resources for a Hall of Fame.

“Slalom” is dedicated to three Olympic kayakers and canoers who are no longer alive. One of them is Jamie McEwan, who died from cancer in 2014.