Attacked and disqualified for being a woman runner 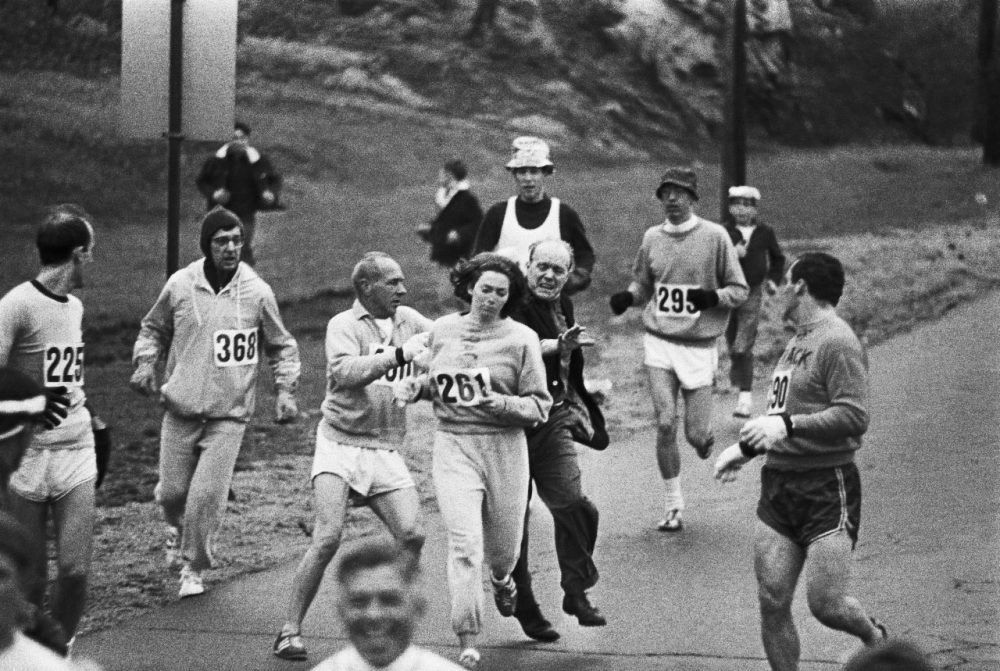 Kathrine Switzer wearing #261 attacked by a race official from behind at the 1967 Boston Marathon. The pioneer runner became the first woman to officially compete at a marathon.
Posted Wednesday, November 2, 2022 10:39 am

There was a time when running a marathon was the bastion of men and allowing women to compete in the 26.2-mile race that commemorates a Greek battle was tantamount to sending them into military combat.

Kathrine Switzer broke that mold in 1967 when she became the first female to run the Boston Marathon as a numbered entrant. She had registered for the race using her first initial and last name, so her gender on paper didn’t raise any suspicion.

It was only later on the street when she was spotted running with the pack that a marathon official tried to physically remove her. The official was unsuccessful and Kathrine didn’t just make it to the finish line, she made history.

Today, the foot racing pioneer is an international celebrity in the world of long-distance running. Sports History Weekly caught up with Kathrine and asked her about that momentous day in Boston some 55 years ago.

How old were you when you ran your first marathon?

Why did you want to run the marathon, and the Boston Marathon in particular?

I discovered early that running always made me feel powerful, free and fearless. The longer I ran, the higher I felt so the 26.2-mile distance intrigued me.

The Boston Marathon, which was founded in 1896, was the most famous race in the world to me next to the Olympics. Yet unlike the Olympics, it was supposedly open to anyone who wanted to try to run. I felt thrilled by the prospect of running 26.2 miles in a race where supposedly anyone could run in the same race as the greatest runners in the world.

There was no other sports event like that. For instance, you cannot just go out and play baseball with the New York Yankees. Plus, my coach Arnie Briggs had run the Boston Marathon 15 times and he used to tell me stories about this race and they inspired me.

Do you shop on Amazon? Support us at SPORTS HISTORY WEEKLY by clicking here to purchase ANY of your personal or household needs

Were you trying to prove anything or make a statement when you first ran the Boston Marathon in 1967?

No, I was just a kid who wanted to run, and was there as a reward from my coach who didn’t believe that a woman could run the distance. I heard that other women had run marathon distances and that one woman in 1966, Roberta Gibb, ran the Boston Marathon but without an official bib number, so I wasn’t trying to break any barriers.

It wasn’t until a race official attacked me during the run that I became determined to finish and speak out on behalf of all women.

How did you enter the race if it was for men only?

First, there were no rules written saying it was a men’s only race. Next, there was nothing about gender on the entry form. Third, my coach told me it was OK for me to enter and in fact I must enter the race properly for my run to count.

Lastly, I signed my name with my initials, K.V. Switzer. So, the officials probably thought K. stood for a man’s name.

BUY on Amazon- 'First Ladies of Running' by Amby Burfoot

Did you disguise yourself as a man?

Absolutely not! I was very proud of being a woman. I had long hair, wore lipstick and eyeliner to the start line. I was wearing a very nice shorts and top outfit so I’d look good, but because the weather conditions were miserable, 34 degrees, snowing and sleeting, I had to leave my baggy grey sweat suit on.

I’d planned on only wearing that to warm up in, and then discard it, as most athletes do before a race. It was my worst looking warm-up suit, too! All the men around me knew that I was a woman.

The morning of the race, it was not only snowing/sleeting but also very windy and very cold, and everyone looked alike in their baggy grey sweat suits—including me. So perhaps officials didn’t notice me then. If it had been a hot day, and I was only wearing the shorts and top, history might have been changed.

At what point in the race did the official attack you and why?

At about the 2-mile mark, so I still had 24 miles to run. The official claimed the race was a men’s only race and that I was not allowed to run. He was very angry that I had obtained an official bib number, and he lost his temper.

What did the men around you do in the race?

They were shouting at the official to leave me alone and tried to push him away but he was very determined. Then my boyfriend, who was an ex-All American football player, gave the official a massive shoulder charge and sent him flying out of the race.

Did you get in trouble for running the Boston Marathon?

Yes, the official who attacked me had me disqualified from the race and then expelled from the Amateur Athletic Union, the sport’s governing body, for a whole list of reasons, one of which was running with men. Plus, there was a lot of negative press reports and plenty of hate mail.

Do you shop on Amazon? Support us at SPORTS HISTORY WEEKLY by clicking here to purchase ANY of your personal and household needs

There are famous photos of the official attacking you. How did they take those photos?

The photo truck was right in front of us and the press and officials’ bus were alongside of us, working their way from the back of the race pack to the front. The official jumped off the bus and attacked me...right in full view of the photographers taking pictures from the back of the truck.

It was very bad timing for the official, but it was very good timing for women’s rights. The photo of the incident was flashed around the world and is now in Time-Life’s book, “100 Photos that Changed the World.”

How has the Boston Marathon experience changed your life?

In just about every way because by the time I finished the race, I was inspired to both become a better athlete myself and create opportunities for other women in running.

All this led to several interesting careers, almost all of which I designed for myself and are connected to running and social change. The 1967 Boston Marathon also told me I could persevere over anything. And it has helped me to be pretty fearless in other ways, too. (Mostly, anyway!!)

Young women today have many options in sports. Why would they select long-distance running?

Because running is totally easy, convenient and cheap. It does not require a team, a field, a gym or a tee-time. It welcomes all ages, sizes, abilities and ethnicities. It only requires a pair of shoes. You can run for fun, or be competitive.

Also, women are very good at it. They have exceptional ability in endurance and stamina. Most of all, it is instantly transforming. When you run you feel empowered; full of self-esteem and in control of your life. It busts stress and gives you the courage to do what you never thought you could do.

In addition, because once those other sports are over--when college and high school are done--they don't exist anymore unless you go on to be a pro. The USA is very bad about not having community teams and sports, especially for women.

(SHW originally conductd this interview with Kathrine in Nov/2019)