An investor launches a pro-pickleball league 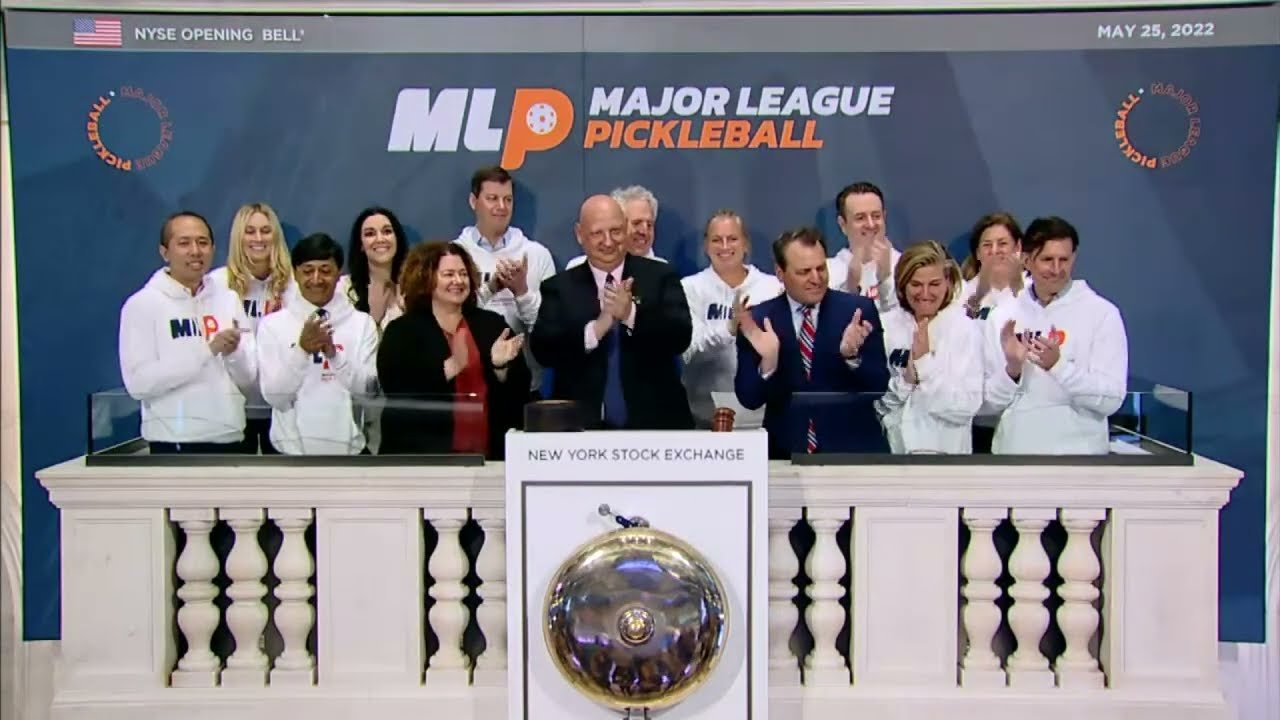 Steven Kuhn (center), founder of Major League Pickleball, rings the opening bell of the New York Stock Exchange on May 25, 2022. The game has exploded across the country to include 4.8 million players.
Posted Sunday, June 19, 2022 8:00 am

Just before launching the day’s trading session, the pickleball ambassadors treated their hosts at the New York Stock Exchange to an exhibition of the latest ball-and-racquet phenomenon, a hybrid game of tennis, badminton and ping-pong.

Kuhn is the founder of Major League Pickleball (MLP), one of 3 professional pickleball leagues that sprung up in response to the fastest growing sport in America.

Kuhn is referring to MLP’s format, which is comprised of 2 men and 2 women playing doubles and mixed doubles tournaments. With colorful team names like the ‘Jackrabbits’ and ‘Mad Drops’, matches are as competitive as they are fun.

MLP currently has 12 professional teams employing 48 elite pickleballers. This year, its second one in existence, the league is holding 3 championship events in Austin, Newport Beach, and Columbus.

Team BLQK, owned by Los Angeles-based investor Ritchie Tuazon, took home the trophy in Austin this month. The tournament in Newport Beach is scheduled to take place in August, followed by Columbus in October.

CBS Sports Network televises the finals at each event, which lasts 3 days and pays out $100,000 to the winning team. In keeping with MLP’s gender equity policy, both men and women earn an equal share of the prize money at $25,000 each.

As individuals, Kuhn estimates that professional tennis players who are not ranked in the top 200 can probably earn more money competing in pickleball.

The business playbook for his league is modeled on Major League Soccer (MLS) from its early days and more recently, Major League Lacrosse. Essentially, team owners buy into the league, which gives them the right to own a franchise they can market and brand.

The ex-Wall Streeter expects next year’s entry fee to be $1 million as the league expands with 4 more squads for a total of 16 across the country.

Kuhn left the corporate world 7 years ago to pursue other interests. He was introduced to pickleball by his nephew and was an instant convert.

His entrepreneurial vision for a professional league was enough to persuade other investors and tennis veterans to plough money into a sport that has penetrated every state.

An irrepressible promoter of the game, Kuhn says: “In an hour of pickleball, you hit the ball 10 times as much as you do in tennis”.

Remarkably, pickleball’s origins go back 2 generations but the game’s mass appeal only exploded in the past few years, driven largely by the Covid lockdowns.

Pickleball was founded in 1965 by Congressman Joel Pritchard and his friends as an improvised recreation for their kids.

The families were at their weekend homes on Bainbridge Island near Seattle, Washington when they started volleying a perforated ball with ping-pong paddles in a backyard badminton court.

Soon enough, they lowered the net from 60 inches to 36 inches and created a set of rules, including the single bounce.

The unlikely name for their new leisure activity was inspired by the local ‘pickle boat’ races, the annual friendly regattas held by college crew teams.

The game caught on with seniors and was introduced at the Arizona Senior Olympics in 2001 and later on at the Huntsman World Senior Games in St. George, Utah.

In 2005, USA Pickleball was founded to foster the growth of the game and act as its national governing body. As of 2021, the organization boasted 50,000 members, up 43% from the previous year. There are now some 8,500 locations on the USA Pickleball’s Places2Play map.

According to the Sports & Fitness Industry Association, pickleball has grown by 39% in the past 2 years to 4.8 million players. Though, the game still remains in the shadow of tennis, which saw 22 million participants in 2020.

Kuhn lays out his vision for pickleball with a simple catchphrase: “40 by 30”. He wants to see 40 million players engaged by 2030.

Because of its coed nature and low-cost structure, he expects colleges to adopt the game within 2-3 years as a sanctioned NCAA sport.

The Olympics are another showcasing platform. Around the world, the infrastructure is already in place for popular badminton competitions, making it easier to introduce pickleball as an exhibition sport at the 2024 Paris Olympics.

Though, realistically, it wouldn’t be until 2028 in Los Angeles that pickleball can be voted in by the IOC as an official Olympic event.

In the U.S., the core group of dedicated pickleball players is still in the 55+ age group. As such, the sport is not without its reported injuries, mostly in the ankles and achilles tendons.

Still, the game has gotten older people off the couch and turned non-athletes into light athletes. “Pickleball makes America both physically and mentally healthier,” Kuhn likes to tout.

Socially, he views the game as bringing people together across all ages, ethnicities, and economic backgrounds.

“I’ve never seen a political argument on a pickleball court”, he says with infectious exuberance.