The 'Michael Jordan' of His Era 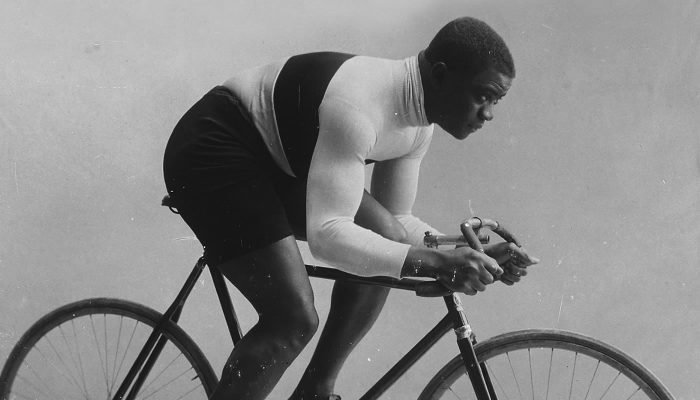 Major Taylor, the first African-American champion of any sport. Winning gold in track cycling at the 1899 World Championships, he preceded Jack Johnson in boxing and Jesse Owens in track & field.
Posted Sunday, July 24, 2022 8:00 am

Before there was Jack Johnson in the boxing ring, or Jesse Owens on the running track, there was Major Taylor on the bicycle.

Predating 20th century’s most accomplished black athletes who are household names, Taylor was a cycling sprinter in the post-decades of the Civil War, becoming world champion just 34 years after slavery was abolished in the United States.

Largely forgotten today, Taylor was a pioneering legend who came up in an era when bike racing was the most popular sport in America and riders were the highest paid athletes in the country.

In the years leading up to the turn of the 20th century, Americans were fascinated with the bicycle. About 300 companies were churning out bikes and for the first time in 1893, more bikes were sold to the general public than horses.

Until the advent of the automobile in the early 1900’s, cycling had a widespread impact on transportation, manufacturing and even fashion. Roughly 1/3 of all patents that were filed at the time were also related to the pedaling contraption.

Suffragette Susan B. Anthony said that cycling did more to liberate women than anything else in the world.

After getting on a bike and recognizing its hazards, Mark Twain quipped in his characteristic glib style, “Get one...you will not regret it, if you live”.

The son of a black soldier who fought in the Union Army, Marshall Walter Taylor was born on November 26, 1878 in Indianapolis, Indiana. He got his first bike when he was 12 and quickly became a trickster on two wheels.

As a teenager, he worked in bike shops training riders and performing stunts to lure customers while wearing a military jacket, which earned him the nickname “Major”.

Taylor struck up a friendship with a white mentor, Louis “Birdie” Munger, a former high-wheel racer and owner of the Munger Cycling Manufacturing Company. The elder saw championship potential in Taylor and coached him to become a racer.

Only 18 years old, Taylor participated in his first professional race in 1896 at New York City’s Madison Square Garden (MSG), the mecca of indoor cycling. A day after making his debut and winning a ½ mile handicap race inside MSG’s velodrome, he took on the grueling 6-day endurance race in the same venue.

Fast, dangerous and occasionally deadly, the race drew thousands of paying spectators who came to watch a field of cyclists battle extreme mental and physical fatigue as they raced around a sloped wooden track for six straight days and nights.

Prostrated after completing 1,732 miles and taking 8th place, Taylor dropped out on the final day and decided that his talents lay in the sprint rather than distance.

Despite the popularity of competitive cycling, the racial barriers of the Jim Crow era still kept African-Americans out of the dominant white sport. Taylor routinely encountered prejudices from riders, in addition to track owners who feared that other cyclists would refuse to compete if Taylor were in the chase.

As a youngster, he won his first amateur race at 13 and after breaking the 1-mile amateur track record at 15, he was booed by the crowd and barred from the track because of his skin color.

In future races, the aspiring cyclist would endure harsh treatments such as ice water thrown in his face, nails tossed in front of his tires, and illegal maneuvers by racers who boxed him in to prevent a sprint to the finish line.

Remarkably, despite the endless taunts, attacks and dirty tricks, Taylor rose to become “the most formidable racer in America”.

Munger urged him to move to Worcester, Massachusetts where the racial climate was more tolerant and where Munger set up a bike factory. Taylor worked and raced for his employer and then joined the racing circuit, riding for various professional teams.

With some tracks accommodating as many as 25,000 viewers, cycling was big business and racers were the highest paid athletes in professional sports.

After winning gold in track cycling at the 1899 World Championships in Montreal, Taylor became the first African-American world champion in any sport. Solicited by numerous promoters, he turned down a $15,000 offer to compete in France due to his strict religious beliefs that he didn’t race on Sundays.

Two years later, the French buckled and agreed to have Taylor race off Sundays. The celebrated athlete who changed the racing schedule in France, cycling's global epicenter, made his way across the Atlantic where he became an instant hit on the track as well as with the fans and newspaper reporters.

He won 42 of the 57 races he entered and the following year he participated in a European tour, emerging victorious in 40 of 57 competitions against the best riders on the continent. A 1903 world tour, which included Australia and New Zealand, earned him prize money of $35,000.

The American champ who couldn’t get served in restaurants and hotels in his own country was now openly embraced abroad.

Initially buried in an unmarked pauper’s grave outside Chicago, his body was exhumed in 1948 and given a respectable resting place with funds donated by Frank Schwinn, owner of the Schwinn Bicycle Company.