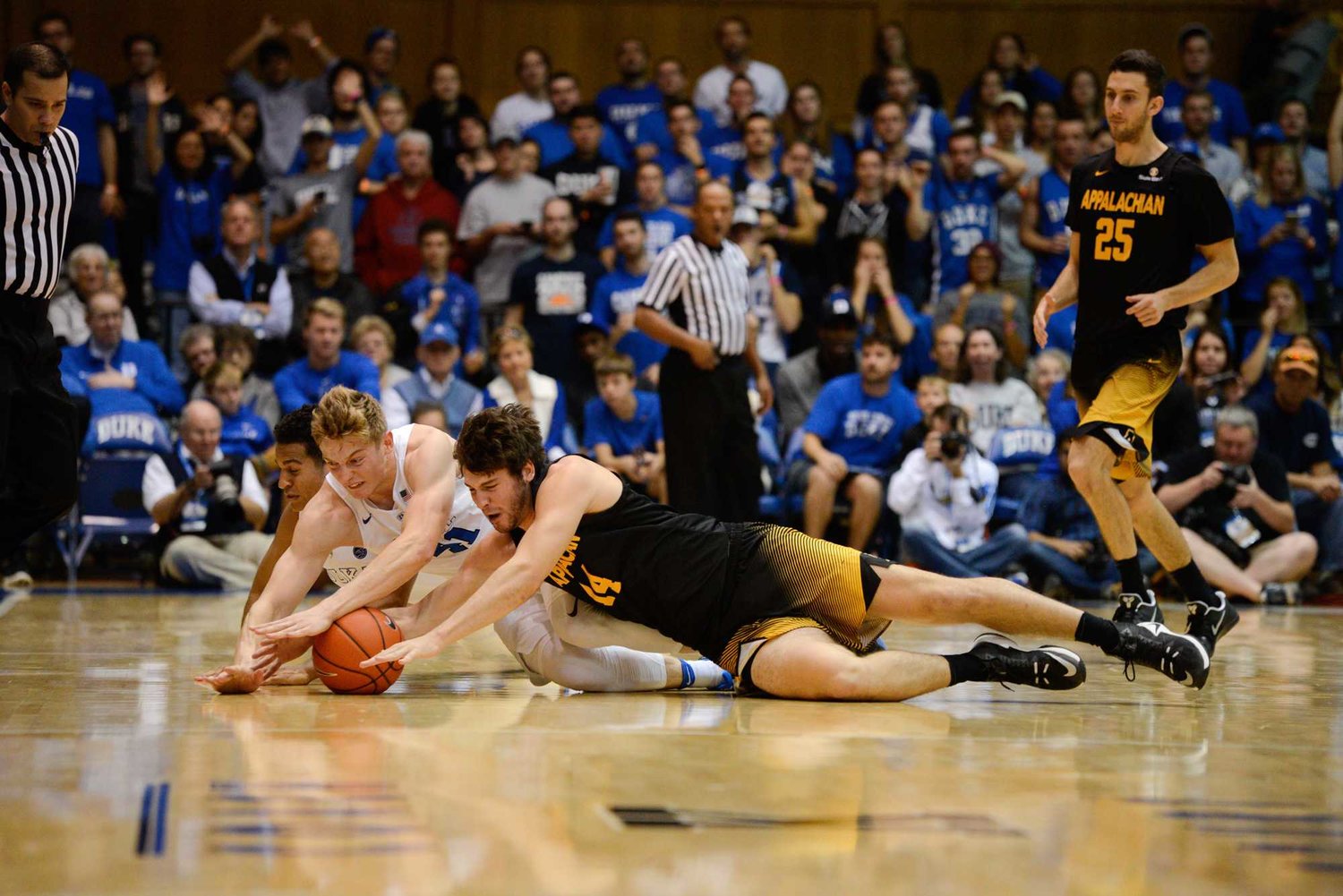 Appalachian State and Duke fighting for the ball in their last face-off, which Duke won 93-58 (Nov/2016). Thirty-five years earlier (1981), the Mountaineers achieved their first and only victory against the Blue Devils, defeating them 75-70.
Posted Thursday, December 2, 2021 6:02 pm
By Johnathan Yates

As Coach Mike Kzyzewski’s 4-decade career with Duke comes to an illustrious end, one man recalls facing off against his team as a player, and then taking home a valuable lesson as a future coach.

Forty years ago on December 5, 1981, Appalachian State University upset Duke University 75-70 in their first and only victory over the Blue Devils.

Although it was Coach Kzyzewski’s 2nd year at Duke and the two schools would play just 8 games against each other over the course of 40 years, memories of that match and its aftermath are still etched in college basketball lore.

Major upsets in college hoops are generally led by the guards and this one was no different. Appalachian’s John Fitch, who was not recruited by Duke even though he was high school player of the year just two hours away in Charlotte, outscored Vince Taylor, Coach K's hand-picked All-American guard from Tates Creek High School in Kentucky.

What tells us even more about how Fitch performed that night is that he hit all eight of his free throws while Taylor was never fouled. Appalachian State was clearly in control of the game.

Sports History Weekly's Jonathan Yates headed down to Charlotte to meet with Fitch, who is now Assistant Coach for Charlotte Latin, a local high school.

When Fitch’s alma mater squares off against Duke on December 16 in just their 9th game in four decades, you can be sure that the retired insurance broker who is now in his 60s will be reminiscing about his playing days with the Mountaineers.

A college senior back then, Fitch started as guard at the legendary hostile environs of Cameron. He ended up topping the board with 22 points for Appalachian State, but it was what happened after the game in the visitors' locker room that remained firmly embedded in his memory.

No one expected Appalachian State to beat Duke, which had played in the national championship game just three years earlier. But if there was one player destined to take the Blue Devils down, it was Fitch.

His parents first met in college at the University of North Carolina-Chapel Hill in 1947. Both his mother and father lettered in multiple sports, including basketball. His father played in the NFL and his mother was an Olympic-class swimmer.

Fitch recalls: "While my father was one of the last four-sports lettermen at UNC, my mother was, by far, the better athlete as she was a superior golfer, could punt the ball over fifty yards, and caught my 85-mph fastball in the backyard...all in addition to lettering in swimming at Chapel Hill.”

For six years, Fitch honed his game at summer basketball camps at UNC. As a senior in high school in 1977, he was player of the year in Mecklenburg County, which includes the basketball hot bed of Charlotte.

A lethal outside shooter, teams today would fight over his 3-point tossing talents. But the long-range gravy point didn’t exist when Fitch was in high school, so he went to Appalachian State rather than to UNC, or Duke.

On November 29, 1980, when the NCAA started experimenting with the distance throws, Fitch became just the second college basketball player to make a 3-pointer. The first was Ronnie Carr of Western Carolina.

Fitch explains: "The 3-point line back then was 22 feet, more than four feet longer than the 17 feet nine inches used by the ACC. Though, at the time of the Duke game, only the Southern Conference, which Appalachian State played in, allowed the long throw. So, it was not in effect for the game against Duke, since the Atlantic Coast Conference did not embrace the 3-point shot until 1983.”

Since many of his shots against Duke were at that range and beyond, Fitch would have sunk more than the 22 points he had that evening playing against Vince Taylor.

Fitch went eight for eight from the free throw line while Duke’s star did not even attempt one from the stripe. Taylor, who would later put in 1 season with the New York Knicks before launching a basketball career in Europe, scored only 12 points and had no free throws.

Appalachian was on top virtually the entire game, leading their hosts 38-32 at half time. The Mountaineers made 62.5% of their shots from the floor, 15 of 18 from the charity stripe. Duke, which traditionally emphasized free throws, was 8 for 15. Fitch, who contributed about 20% of Appalachian's points during the season, claimed 30% of his squad’s totality that night.

Just two years earlier, under the guidance of Bobby Cremins, the Mountaineers had reached the NCAA Tournament for the first time in school history, though they fell to the LSU Tigers 71-57 in the second round. They wouldn’t return to the national championship until 2000.

One of the youngest coaches ever to take charge of a Division I basketball program, Cremins led Appalachian to three Southern Conference regular season championships.

Against Duke in 1981, now led by Coach Kevin Cantwell, they were up against formidable opponents who were 4-time Final Four competitors, and their performance was nothing short of exceptional.

But it’s not the memory of outplaying an All-American, or defeating a powerhouse that Fitch cherishes most.

"The thing I remember most is Coach Kzyzewski coming into our locker room and shaking everyone's hand. That never happened again," he says.

When asked if that event 40 years ago had affected the way he coaches, Fitch replied, "It was huge. To this day, Coach K made me realize that there was a bigger purpose to coaching than wins and losses. After every game, I always made sure I made eye contact with each player and coach and firmly shake everyone’s hand regardless of the outcome of the game."

This respect has been extended to many more by Fitch.

"I made sure I knew the names of all the referees calling our game so I could call them by their first name during the game, or if I later ran into them in public," he notes. "That learning experience from Coach Kzyzewski has truly paid dividends, but I was also taught that by my parents as a life lesson!”