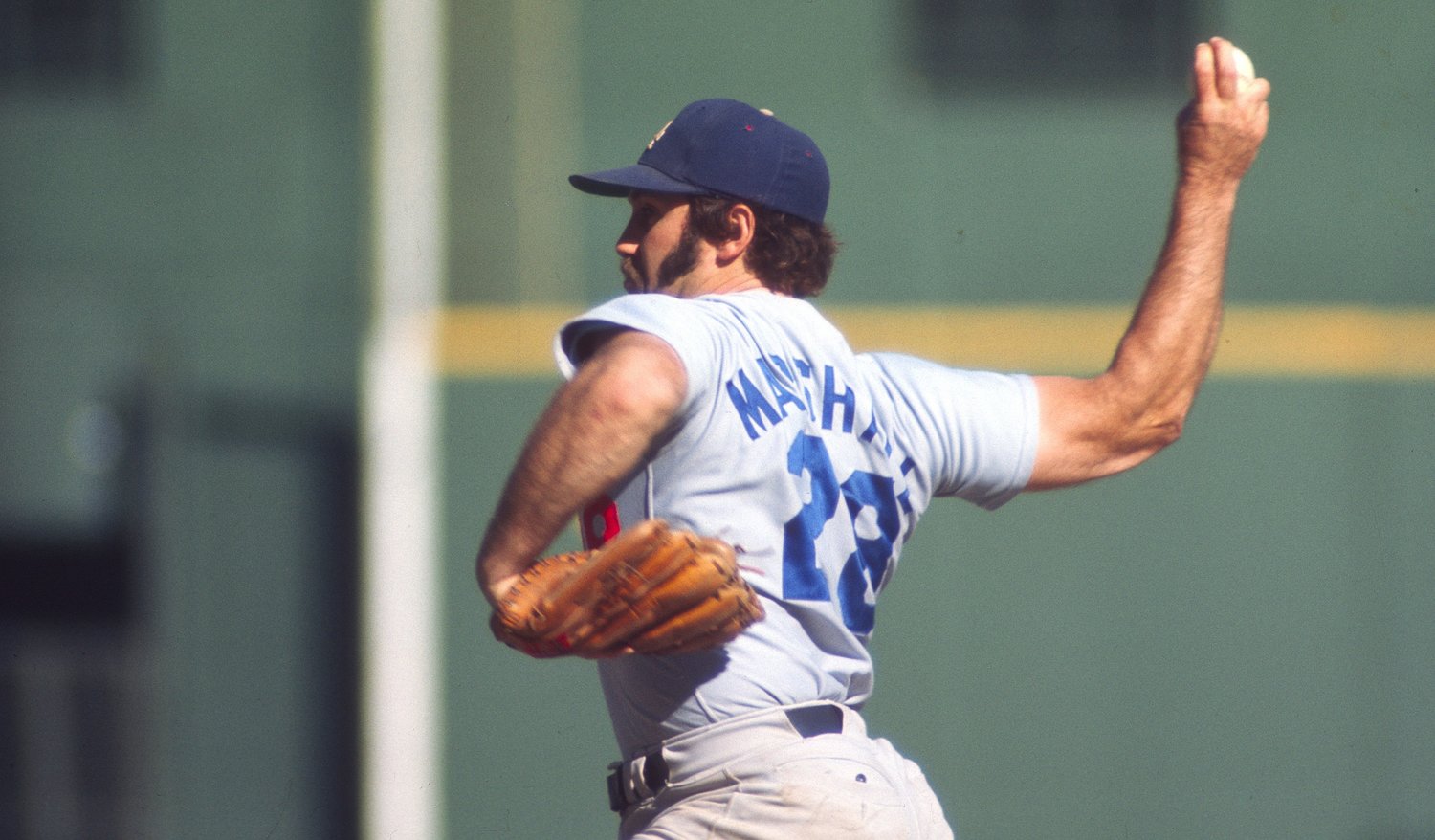 Mike Marshall pitching for the Los Angeles Dodgers in 1974. A pioneer in the scientific techniques behind the hurl, he won the NL Cy Young Award and went on to earn a PhD in Kinesiology.
Posted Sunday, June 26, 2022 8:00 am
By Rick Bueti

In late April of 2017, I had the good fortune to be introduced by Ray Frosti, a mutual friend, to 1974 National League Cy Young Award winner, the late Dr. Mike Marshall.

At the time, I was a contributing writer for a now-defunct sports news outlet and my interview with “Iron Mike” was never published.

Dr. Marshall passed away on June 1, 2021 at the age of 78. A year after his death, I continue to be in awe of his remarkable achievements during his Cy Young season nearly half a century ago.

Marshall went 15-12 during the season, had 21 saves, and posted a 2.42 ERA. His workload continued in the postseason as he led the Dodgers to the World Series and although they lost to the 3-peat world champion Oakland A’s, Marshall pitched in all 5 games, throwing 9 innings with 10 strikeouts and finished the series with a 1.00 ERA.

This complete body of work is unquestionably the greatest season by a relief pitcher in baseball history, especially compared with today’s game, which is replete with pre-set pitch counts, innings limitations, rest requirements and middle-relief, set up and closing specialists.

Against all this, Marshall spent much of his professional and post-professional life being unfairly labeled as an ornery curmudgeon. But I found Marshall to be refreshingly non-conformist. He was totally disinterested with his place in history, his Hall of Fame potential, or in talking about his spectacular career.

Many of his answers to my questions were curt, but bluntly truthful. Marshall was not your typical retired ball player. He had a PhD in Physical Education and Exercise Physiology from Michigan State University and had been a Professor of Kinesiology for more than a decade.

But I believe he was frustrated that his unique approaches to pitching mechanics were ignored by Major League Baseball, despite his advanced pitching expertise and stellar career which he completed at age 38, but then continued as a semi-pro for 18 more years with no arm injuries!

How else can one explain Marshall’s uncanny stability, other than he knew the correct way to throw a baseball that prevents the elbow and shoulder injuries we see in pitchers today?

Below are some highlights of my interview with Marshall, which I conducted by email since he was suffering from hearing problems that had deteriorated considerably.

Tell me about 1974. You set a record for relief appearances and innings pitched for a reliever. How did you do it mentally and physically?

The way that I tolerated it mentally and physically was that I designed a pitching motion that eliminated all physical stress. The more that I pitched, the easier it was to pitch.

When I did not pitch, I threw batting practice to the non-starters. The more that I threw, the more skilled I became. Not pitching was the problem.

That year, you tied a record for most consecutive game appearances (13), in addition to the overall workload. Did you have any shoulder, or elbow, or any other physical issues to overcome?

The pitching motion I designed made pitching easy. Kinesiology showed me the way.

Why do you think your style of throwing did not catch on with coaches/managers?

‘Traditional' pitching coaches refused to learn my pitching motion. They did not know the difference between the Latissimus Dorsi muscle and the Pectoralis Major muscle.

What was your relationship like with Walter Alston (Dodgers Manager)?

When I arrived in Spring Training, Walter told me that he had taken a Kinesiology class. He told me to tell him when I needed a day off. I told Walter that I will never take a day off. It keeps me sharp.

A lot has been written about your "curmudgeonly" demeanor and that you always spoke your mind, which allegedly alienated you from some teammates. How do you respond to that?

From birth, I had hearing problems. A hearing test in fourth grade ended with an operation. The operation destroyed my hearing and made it worse with loud ringing in my ears. I have tolerated the loud ringing to this day. But on every team I played, they voted me the team representative.

You had a 14-year career. Who were your favorite teammates and why?

Pitching Major League Baseball was for play. Earning my doctoral degree was important. I spent my time on the road studying. Hearing minimized my conversations.

Was there any batter you feared, or did you have confidence you could get out anybody if you pitched them the right way?

I recorded every batter's at bats and wrote the six pitch sequences I would use.

You pitched 18 more years after you retired from pro baseball until you were approximately 56 years old. Did you experience any arm issues then?

If I had not tried to catch a falling free-standing closet, I would have pitched for more years. Unfortunately, I tore my Supraspinatus.

Do you think if MLB pitchers adopted your philosophy, then ulnar injuries would be virtually eliminated?

To prevent Ulnar Collateral Ligament injuries, baseball pitchers need to pendulum swing their pitching arm downward, backward and upward to driveline height in one, smooth and continuous movement with the Pronator Teres contracting before, during and after the acceleration phase.

The Ulnar Collateral Ligament cannot move the Ulna bone tightly to the Humerus bone, the Pronator Teres muscle can. Surgery is a waste. That 'traditional' pitching coaches teach an injury that destroys the elbow joint is worth suing them.

Do you think the players who excelled during the steroid era, particularly Bonds, A-Rod, McGwire, Palmeiro, Clemens and Sosa, should be banned from HOF considerations?

How can players use steroids and feel good about themselves?

You had a rule with teams you coached that no batter in your lineup was allowed to swing at a pitch until they had at least 2 strikes in the count the entire first time through your order. Is that true?

Were there any other unique strategies you can share that you are most proud of?

What would you like people today to know about you?

I want baseball to eliminate destroying the elbow joint. I can show them how in five minutes.