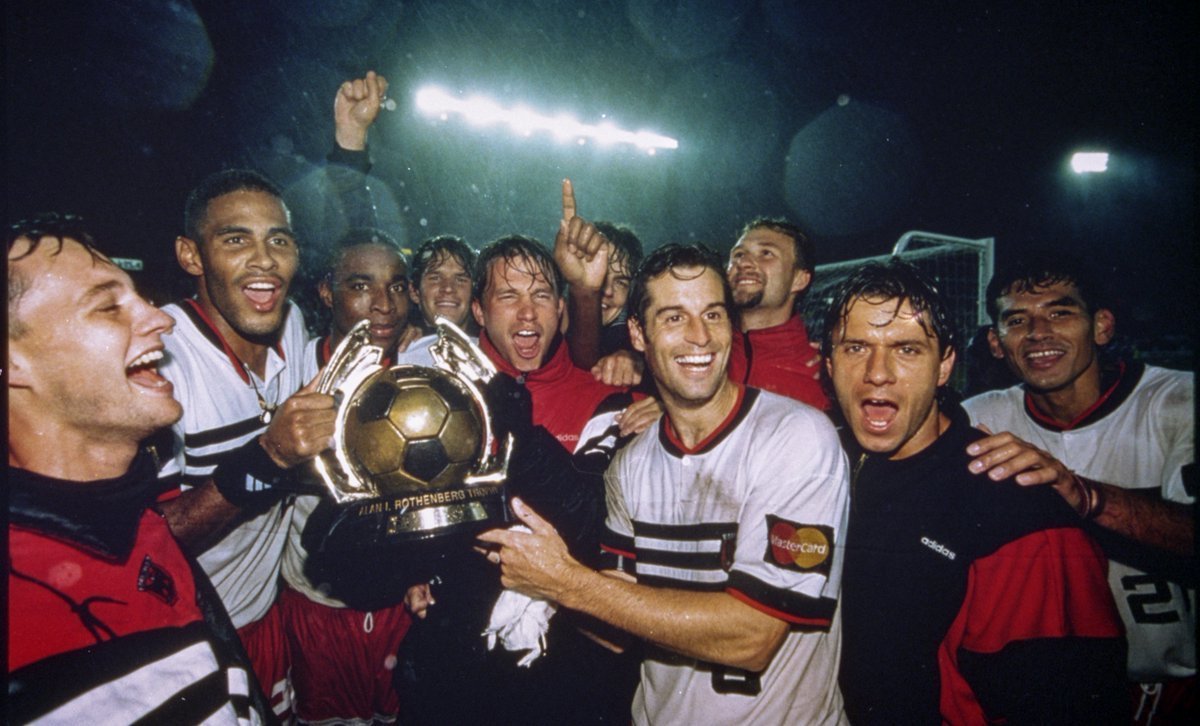 DC United celebrating their 3-2 victory over the Los Angeles Galaxy in the first ever championship game of MLS (1996).
Posted Sunday, October 2, 2022 8:00 am

Twenty years ago, Major League Soccer (MLS), the premier North American soccer league, was on life support. Financial losses were mounting, teams were folding, and fans were disenchanted with the game’s caliber.

Today, the average MLS franchise is worth $582 million and the 28-team league is valued at $16.3 billion, including related businesses and real estate holdings (per Sportico).

What made the turnaround possible was a combination of factors that included financial patience from a small group of dedicated investors, the construction of soccer-specific stadiums, and a new generation of American fans who came to embrace the world’s most popular sport.

For most of the 20th century, soccer drew a big yawn in the American sporting landscape, which was rooted in baseball, football, and basketball. It was seen as an immigrant’s game that was played by only a handful of colleges.

After languishing in the dark ages, the sport took off in 1968 with the formation of the North American Soccer League (NASL). The impetus was the surprisingly large American TV audience that tuned in to the 1966 World Cup and the subsequent documentary titled “Goal!”, the first World Cup film released in color.

In September, 1973, Sports Illustrated featured the first soccer player on its cover issue with the heading, “Soccer Goes American”.

International stars such as Brazil’s Pele, Germany’s Franz Beckenbauer and Holland’s Johan Cruyff were plucked out of retirement and signed onto the field in the U.S. to help stimulate interest in the game.

NASL grew to 24 teams at its peak but the media buzz around America’s new sport belied the financial health of the league. They had over-expanded and over-spent to recruit talent. By 1984, the league that introduced soccer to the nation collapsed, weighed down by red ink and team contractions.

But NASL didn't disappear without leaving a legacy. It planted the seeds for youth soccer and provided a bitter lesson for financial restraint. The problem wasn't the game but the right marketing and financial management.

MLS picked up the broken pieces as part the United States’ successful bid to the host the 1994 World Cup. Ironically, the same man who helped promote NASL in the 1960s was now back in the game with MLS in the 1990s.

A businessman and heir to his father’s oil fortune, Lamar Hunt was better known as founder of the AFL and owner of the Kansas City Chiefs. But the brilliant sports visionary was also a quiet pioneer of American soccer.

On trips to Ireland and Great Britain he witnessed the spectator euphoria around soccer matches, especially the 1966 World Cup when England defeated Germany 4-2.

In 1996, Hunt launched the Columbus Crew and the Kansas City Wizards (now Sporting KC). Most importantly, a few years later, he financed the construction of the first soccer-specific stadium in America since 1913, the Mapfre Stadium, home of the Columbus Crew.

The league's coming out party took place in the Spring of 1996 between the San Jose Clash and D.C. United in front of a crowd of 32,000 at Spartan Stadium in San Jose, California.

But the renewed experiment in American soccer was not without its challenges. Attendance dropped as sports lovers still balked at a low scoring game that was also being played in shared stadiums.

Eight of the original ten MLS squads were chasing the ball in large American football venues. Purists also derided the poor quality they saw on the field and certain modified rules that were supposedly tailored for American tastes.

Adding to the blow was the U.S. national team’s miserable performance at the 1998 World Cup in France, which saw the Americans drop to the bottom of the table.

Fans continued to flee the league and teams kept running operating losses. In 1999, MLS commissioner Doug Logan was out the door and replaced by former NFL executive, Don Garber. The league now set out to refocus its mission amid questions about the organization’s long-term viability.

Expansion plans were halted as the Tampa Bay Mutiny and Miami Fusion franchises were contracted. Earlier attempts to ‘Americanize’ the sport were also reversed.

At the start of the new millennium, MLS was down to just 3 committed owners who were bankrolling the league. Collectively, they had accumulated $250 million in losses since the inaugural kickoff in 1996.

By supporting 6 franchises through the trying times, Anschutz would later be credited as “the man who saved MLS”.

Another $100 million was hemorrhaged through 2004. But at that point, the “beautiful game” as Pele used to call it, started to look more beautiful on the pitch and in the boardroom.

The opening of the league’s first soccer-specific stadium in 1999 in Columbus, Ohio spurred a trend among other teams to pursue their own facilities instead of leasing football fields.

Hunt and Anschutz oversaw the addition of six more independent fields so that by 2008, the majority of teams were playing on their own turfs. Also, underpinning the cost control program was the league’s centralized structure, which avoided bidding wars between teams and kept player salaries capped.

Instead of functioning as an association of independently-owned franchises, the league itself owned the teams, which were then operated by individual league investors.

The business model was further reinforced after MLS won an antitrust lawsuit filed by players who were dissatisfied with their compensation restrictions.

But just like any other modern professional sport, it’s the fan reaction that ultimately lends credence and permanence to the game.

American soccer got a boost when the U.S. men’s team unexpectedly made the quarterfinals at the 2002 World Cup, beating out powerhouse Portugal and rival Mexico with home- grown talents of Brian McBride, Claudio Reyna, DaMarcus Beasley and Landon Donovan.

Do you shop on Amazon? Supoort us at SPORTS HISTORY WEEKLY by clicking here for ANY of your purchase needs

Fearing the loss of top players to European clubs and recognizing the need for star power on the field, MLS implemented the Designated Player Rule, which allowed each team to shop for up to 3 players outside the salary cap.

The first to join and make celebrity headlines was England’s David Beckham, who left Real Madrid in 2007 to sign up with LA Galaxy.

Media broadcasters jumped in on soccer's renewed upsurge. MLS had originally signed TV contracts with no guaranteed fees and just a share of the advertising revenues, but in 2007 the league was proven enough that it was able to ink rights deals with ESPN and Univision for $18 million a year.

The contracts were renewed in 2015 for $90 million per annum, a five-fold increase. More recently and with an eye towards the future of sports streaming, MLS has partnered with AppleTV to stream all games beginning in 2023 for a  guaranteed $250 million a year.

The pay-to-play franchise fee was kicked up by multiples as well. The $10 million that Toronto FC had forked over in 2007 to join the exclusive club grew to $40 million by the time the Montreal Impact arrived in 2012, and $100 million when NYC FC came on board in 2015. Four years later, the entrance fee was up to $150 million when Cincinnati FC kicked off.

That year, Minnesota United opened the gates to Allianz Field, becoming the 17th soccer-specific stadium in the MLS portfolio.

Over this period, MLS had succeeded in building the 3rd highest average number of stadium goers after the NFL and MLB, and ahead of the NBA and NHL. Their place immortalized in the sport's pantheon, Anschutz, Hunt and Kraft sold their stakes and trimmed their holdings to a single team each.

No doubt, the story of American soccer is a remarkable tale of the world's most popular sport kicking, struggling and finally succeeding in digging its cleats on North American soil.