On November 15, 1979, the Washington Post wrote: “Morgan State is the leading passing team in the MEAC but Thomas [Head Football Coach] prefers to talk about his defense… 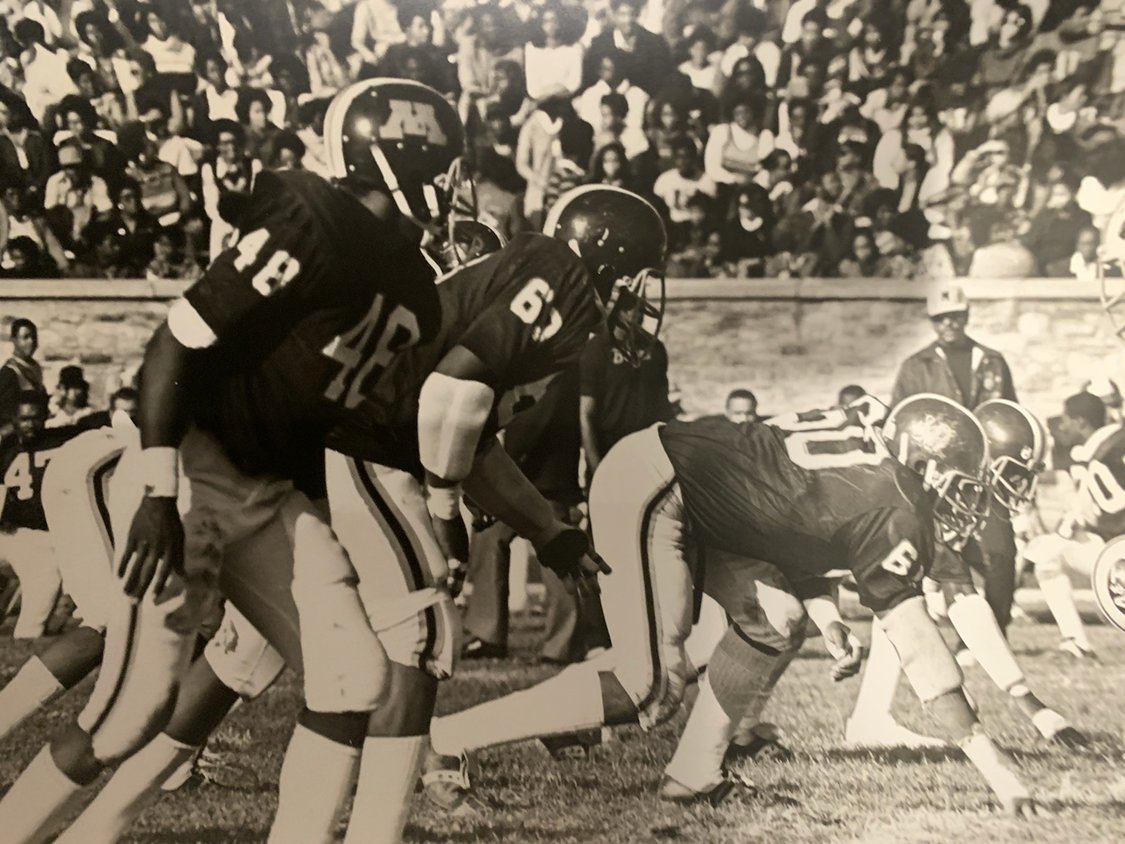 Mike Lyons spearheads 'The Quiet Storm Defense' as the nose tackle for Morgan State University (circa 1979). That year, the Bears went 9-2-0 and won the MEAC championship.
Posted Sunday, November 21, 2021 8:00 am
Interview by Jonathan Yates

On November 15, 1979, the Washington Post wrote: “Morgan State is the leading passing team in the MEAC but Thomas [Head Football Coach] prefers to talk about his defense, nicknamed ‘The Quiet Storm’…”

Morgan State University, an Historically Black College and University (HBCU) that fielded its first football team in 1898, was 3-time champion at the Mid-Eastern Atlantic Conference (MEAC) during the 1970s. In 1979, the Bears went 9-2-0, defeating local rivals Howard (DC) and Towson (MD) and losing just 2 games to Grambling State (LA) and Alabama A&M.

For more perspective on those glory days, Sports History Weekly sat down with Dr Mike Lyons, who was then middle linebacker and nose tackle for Morgan. Coach Clarence Thomas called Lyons the "unsung hero" of the legendary Quiet Storm Defense.

Looking back, what made The Quiet Storm Defense so great as a unit in football?

When I reflect on what made The Quiet Storm Defense as one of the best, I think about the traditions and winning legacy that Morgan had built. For example, it was a Morgan tradition for freshmen football players to have their hair cut-off by returning players, and then recite the school song.

This was a tradition that ensured bonding and respect. Because of this old tradition, we had become close friends on and off the field. That friendship is the same today as it was in 1976.

Each member on the Quiet Storm defense was highly skilled and excelled in their positions and roles on defense. We played well as a team and had high expectations. We were a bunch of disciplined guys that came together at the right time!

To enhance winning, Coach Thomas would hand out railroad spikes to any member of the defense whose performance merited recognition. This was an added incentive to compete at a higher level. Coach Thomas wanted players who displayed good character and discipline.

What did you think when Coach Clarence Thomas told you practice was at 6:30 in the morning?

I had no concept of time when I was younger. I would stay up late regardless of when we practiced. I was accustomed to practicing twice a day regardless of the time. It was hard rising that early in the morning to practice, but I enjoyed meeting the guys at the cafeteria for breakfast and joking around before practice.

Other than practice at 6:30 in the morning, what was different about Coach Thomas that made Morgan so great?

What was so different about The Quiet Storm Defense compared to other teams you were on, before and after?

During my first two years under Coach Lattimore, we were a physical team that was hampered by injuries that were sustained during practices. We practiced so hard, by game time we were too beat up to perform at a high level.

In contrast, Coach Thomas was a teacher of the game and taught technique. We practice hard but not as physical. Our practices consisted of drills and walk-throughs. There were maybe two days of hard hitting.

Did you learn anything from playing for Coach Thomas and playing with the others that has helped you succeed in life?

What made you go to Morgan?

You played against one of the best college quarterbacks in history, Doug Williams. What did you think the first time he threw the ball your way?

When I played against Doug in Yankee stadium, I wasn’t enamored by his arm. I was impressed with how well Grambling ran the ball and their blocking scheme. Their offensive line was massive and could block very well. Their players seemed much faster and a little bigger than us.

What did Coach Thomas mean in terming you one of the "unsung heroes" of The Quiet Storm?

I think Coach Thomas recognized that I wasn’t getting the publicity like some of my teammates but understood that I had performed and excelled exceptionally well on the football field. I didn’t always get the recognition when I blocked punts, sacked quarterbacks, or made tackles. I too was a leader on the ‘79 team, and he appreciated my contribution. The previous year, I was the starting middle linebacker.

Going into the ‘79 season, Coach Thomas asked me to play nose guard because of my aggressiveness and quickness. He thought Maurice Brooks was too small to play nose guard and was too good to sit on the bench. Without hesitation I replied yes!

Does it surprise you to see so many HBCU players succeed in the pros? There are more than 30 HBCU players in the NFL. Morgan has Joshua Miles now with Arizona, for example, not to mention sending one of the best linebackers in Willie Lanier and one of the best tight ends in Raymond Chester to The Show.

Not at all…I am surprised there are not more players from HBCU(s) playing professionally. I had a tryout with the Dallas Cowboys and two Canadian teams. There were at least nine members on the Quiet Storm defense that had tryouts with professional teams.

Elvis Franks and Mike Holston were the only two players drafted from the ‘79 team. A lack of media exposure is hurting and hindering players from HBCUs from getting drafted or an opportunity to play professionally.

After much success both on and off the field as an adult with a doctorate, what is significant to you now about playing for The Quiet Storm Defense as a teenager straight from high school?

The guys that played on The Quiet Storm Defense are men of good character. These guys have gone on to get advance degrees and have done well in their careers and communities. These guys have provided their families with a financial and stable life. They have made sure their children attended and graduated from college.

Now that we are older, we try to support Morgan State football team financially and are mentors to the younger players. We are progressive in our thinking and teachers of character like our former coaches.

IF YOU ENJOY OUR CONTENT, PLEASE CONSIDER A VOLUNTARY DONATION TO SUPPORT OUR  WRITING & JOURNALISTIC EFFORTS.