His exploits and fondest memories 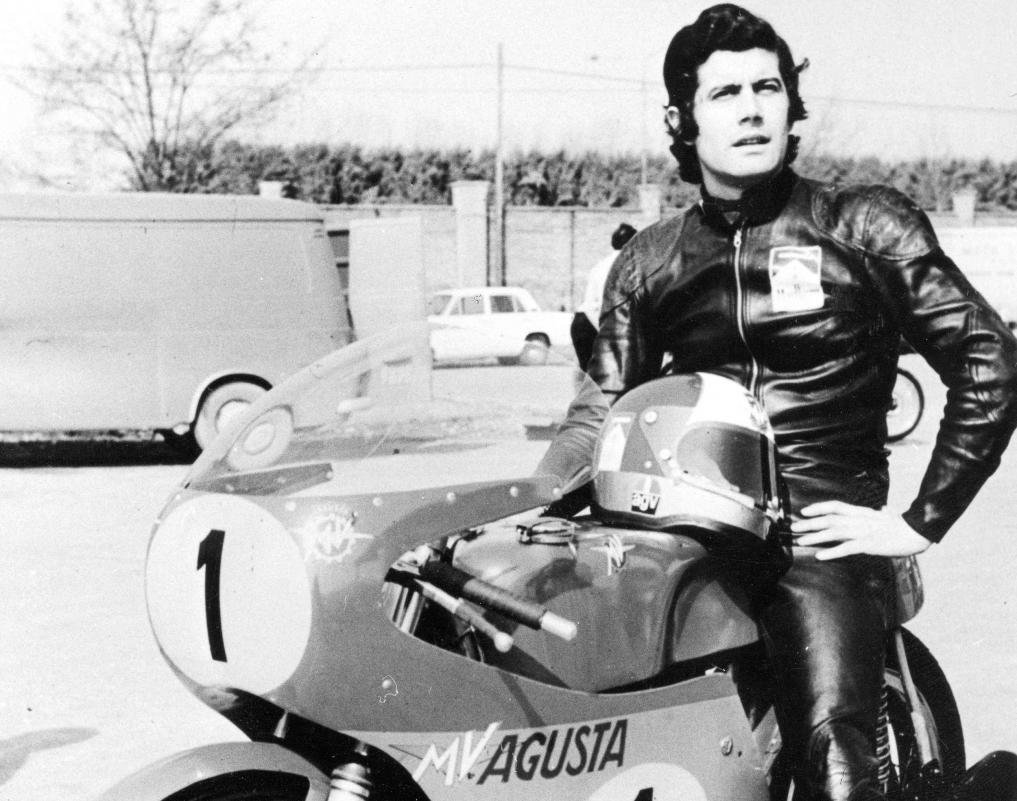 Motorcycle racing legend, Giacomo Agostini, aboard an MV Agusta (early 1970s), which took him to 13 World Championships between 1966 and 1973. He remains the most successful motorbike racer of all time.
Posted Sunday, December 11, 2022 8:00 am

“There is no time to retire,” says Giacomo Agostini, the most successful motorcycle racer in MotoGP history.

Whether he’s commenting for Sky Sport TV, or endorsing brands such as Dainese, or building homes with his real estate development company, ‘Ago’ refuses to slow down.

Over the summer, the Italian icon turned 80, a cause for celebration that prompted him to release The King with 15 Crowns, a hard cover print highlighting his illustrious career on the racetrack.

Sports History Weekly caught up with the 2-wheel legend who was in New York to promote his coffee table book, which is packed with rich photos, statistics, and anecdotes from over 500 races between 1961 and 1977.

At Manhattan’s Dainese store, which sells premium motorcycle riding gear, the silver-haired veteran sat cheerfully as a line of admirers patiently waited their turn for an autograph and a snapshot.

At 80, Ago has a lot to be thankful for. In a profession that flirts with death at every turn, the former speed master didn’t just emerge in one piece from a 17-year racing career, he left behind an unmatched record.

“I am very lucky I won the World Championship 15 times…18 Italian championships for Italy …10 times the Isle of Man, and 122 Grand Prix,” he remarks with a touch of broken English.

68 of his wins were in the 500cc class, while 54 were in the 350cc. With 122 GP titles to his name, he is 7 places ahead of recently-retired Valentino Rossi, who uncannily chartered a parallel career with 115 GP victories and 9 World Championships.

Growing up near Bergamo in Northern Italy, Ago raced against his father’s wishes, starting out in paved hillclimb events. The twisty roads around Lake Iseo near his home made him a natural by the time he set out to conquer the TT.

He won his first chase in 1962 at the Bologna-San Luca hillclimb on a Moto Morini Settebello 175cc. A dream come true for the 20-year-old, that day stands out as one of his most cherished memories.

“I won my first race with my own private motorcycle and my mechanic was a baker,” he recalls laughing.

Morini hired him and the following year he made his Grand Prix debut at Monza, running with the world’s best on a 250cc Bialbero single cylinder. His machine gave out, but it was enough of a showing to convince Morini that a new talent was on the rise.

1964 saw Ago replace Tarquino Provini, who had left Morini after delivering 4 GP victories on the 250cc. It was a tough act to follow, but the young prodigy managed 4th place in 2 of the calendar events- Germany (Nurburgring) and Italy (Monza).

For the first time, his name appeared in the world championship results (12th).

MV Agusta took notice and brought him on board as an understudy to Mike Hailwood, 4-time world champion on their 500cc.

It was his breakout season and on April 25, 1965, he won his first Grand Prix at Nurburgring, riding the company’s brand new 350cc 3-cylinder, a smaller and lighter bike that was MV’s answer to Honda’s formidable factory machines that dominated racing in the early 1960s.

Coming behind his teammate, Hailwood (500cc), and Honda’s Jim Redman (350cc), Ago narrowly missed the world championship title for both classes.

But it didn’t take long for him to top the podium. In 1966, he wrested the 500cc crown after taking the checkered flag in Belgium, Finland and Italy, and was runner-up on the 350cc.

The last race on the calendar (Monza) was especially sweet, since the final standings were determined in his home country.

“One of my greatest memories was when I won at Monza, my first world championship with MV Agusta…140,000 people were there, it was fantastic.”

It was the beginning of his reign with MV, which would take him through epic road battles and another 6 consecutive world titles on the 500cc, and 6 on the 350cc.

In 1974, he left Agusta for Yamaha after the company’s leading pilot- a friend and rival, Jarno Saarinen- was killed in a tragic pileup at the Italian GP. The previous year, Saarinen was the first European to win the Daytona 200.

Few people gave Ago much hope when he switched from a 4-stroke to a 2-stroke with the Japanese manufacturer. In 1974, at Daytona, American champion Kenny Roberts also commented to the press, “the world is America, not Europe.”

On his first trip to the U.S. at Daytona, and in his first time racing a Yamaha 350cc 2-stroke, the Italian roared to victory in a talented field that included Roberts, Barry Sheene, and Gary Nixon.

“I never forgot that race. When I came off the plane back home in Italy there were 50 journalists waiting…they were saying, ‘Ago is like Christopher Columbus, he discovered America!’ “

The improbable feat across the ocean raised Yamaha’s image and cemented Daytona 200’s reputation as one of the world’s most prestigious motorcycle races. After the event, Roberts remarked, “Ago is not human.”

Given his prolific career, Ago experienced surprisingly few spills. While watching his peers meet death on the track, he also never had second thoughts about his profession.

“When you are young, you don’t think about the safety. You love the sport so much. You go with your heart and not with your mind.”

“When you are older, it’s different…se diventa saggio,“ he says in his native Italian- you become wiser.

But Ago didn’t hold back after his close friend, Gilberto Parlotti, was killed in 1972 at the TT on a foggy, rainy stretch of the Mountain Course.

Thinking back, he describes his reaction at the time:

“I went to the FIM [racing governing body] and I said to the President…I think Isle of Man is the best circuit to ride in, the most exciting, but the safety is very bad. We’ll keep the TT race, but take it out from the World Championship.”

After 1976, the TT was removed as an obligatory event on the points calendar. “Many riders appreciated it because it gave them the freedom to decide if they want to go [participate], or not.”

Asked if he thinks his protest against the TT saved future lives, he responds, “Yes, I think so.”

On the safety standards, he explains, “The safety today is fantastic. In my time, the leather suit weighed 1 kilo, today it’s 8 or 9 kilos…the helmets are also integrated…and the circuit is much better, since you have space around the track if you crash.”

But on the machines, he is partial to the old days. “You depend on too much technology today. Before it was just the rider, the mechanic, and the engineer who decided everything.”

Ago enjoyed his final competitive year in 1977, winning his last Grand Prix in 1976 at Nurburgring. Fittingly, it was aboard an MV Agusta and on the same track where he celebrated his first GP victory 11 years earlier.