Rise of the Modern NBA

“From Hang Time to Prime Time”- by Pete Croatto 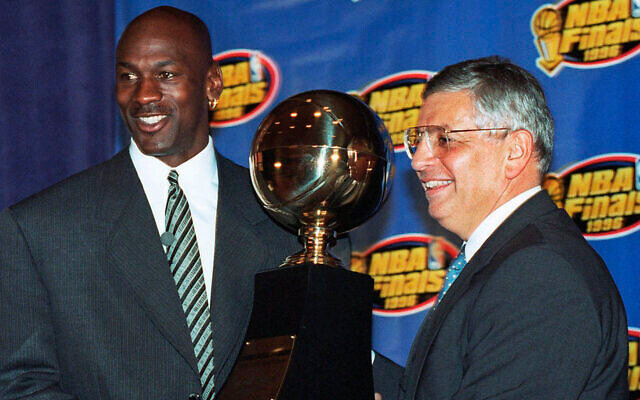 David Stern (right) shown with Michael Jordan receiving the MVP award at the 1996 NBA Finals. Their contribution to the explosion of the NBA is explored in Pete Croatto's new book, "From Hang Time to Prime Time".
Posted Sunday, June 12, 2022 8:00 am

In March of 1982, the Boston Globe ran a series of articles on the NBA, which they dubbed the National Basketball Affliction- A Major League with Major Problems.

Nobody at the paper, whose sports desk covered one of the most storied franchises in the league, bothered calling the NBA’s office in New York City for a comment on the story.

Professional basketball 40 years ago was sliding into irrelevance. Between 1979 and 1981, seven NBA finals games were tape-delayed and broadcast at 11.30 pm. Sixteen of twenty-three teams were in the red. Violence on the court was rife and up to ¾ of the players were reportedly using cocaine.

But within twenty years, the game would undergo a metamorphosis and explode into an unrecognizable global behemoth.

In his first book release, “From Hang Time to Prime Time”, sports writer Pete Croatto charts the transformation of the NBA from its dark decade of the 1970s to the league’s Golden Jubilee at the 1997 All-Star Game.

Researched to exhaustion, Croatto interviewed over 300 people and recorded a bibliography that rivals the length of a chapter.

At the center of it all was David Stern, the imperious NBA commissioner who made his bones as a sports lawyer, but whose true genius lay in the game’s marketing and branding.

Croatto could not interview Stern himself, but he tapped many professionals who worked for him and around him. Most agreed that without Stern’s drive and vision, the NBA would not have reached stratospheric heights.

Stern did not succeed in a vacuum. Before assuming the helm in 1984, he was the NBA’s Executive V.P in charge of marketing, television, and public relations, a period that coincided with the arrival of Magic Johnson and Larry Bird.

In 1979, the duo carried their college rivalry to the NBA, drawing in NCAA fans who never cared much for the pros. Michael Jordan followed in 1984, electrifying the game and almost single-handedly lifting the sport to a new level.

Basketball had its stars in the 1960s and 1970s, but they lacked a showmanship that connected with fans on a broad level.

As point guard for the Indiana Pacers, Don Buse topped the league in assists and steals in 1977. “Don Buse! Who the --- heard of Don Buse in the NBA!,” Croatto quotes sports columnist, Peter Vecsey.

The author also references George Gervin, who played for the San Antonio Spurs for the bulk of his career, as saying that Kareem Abdul-Jabbar “is the greatest player in NBA history, not the greatest entertainer. That distinction…belongs to Michael Jordan and Magic Johnson."

Entertainment is what Stern thought the NBA should deliver. He made the game about the players and their entertainment value, not about the owners or the league or the sport’s heritage.

Baseball was America’s pastime and football grew up with television. “Stern understood that the NBA was not handcuffed to tradition...”

Marvin Gaye’s Motown rendition of the national anthem at the 1983 All-Star Game was one early sign that the game was entering a new era.

Conservative sports writers and Larry O’Brien, commissioner at the time before Stern took over, “seethed” when they heard Gaye’s smooth soulful voice echo through The Forum before the start of the match.

But the reaction was overwhelmingly positive. “I was so proud to be an American that day,” said Los Angeles Lakers coach, Pat Riley. “That game…was about the anthem,” remarked Detroit Pistons point guard, Isiah Thomas.

With the rising tide of popular culture, NBA stars morphed into commercial ambassadors for the league. Rap music, sneakers, film, and fashion found common ground with the hoops game, reinforcing the NBA as a universal brand.

For years, players laced up with Converse shoes but the sneakers were not ‘theirs’. In a consumer frenzy resembling the sale of cabbage patch kids dolls, Air Jordans hit the stores on April 1, 1985, generating $130 million in just the first year.

By the 1990s, hit TV shows such as Seinfeld, Friends, and Mad About You were making references to NBA players in their situational comedies.

While fresh, wholesome faces such as Magic were dazzling audiences on the court, Stern, as VP, was also busy behind the scenes trying to clean up the drug problems that hung over from the 1970s.

Recreational substance use was ubiquitous during Larry O'Brien’s tenure. In the 1980 Finals, NBA All-Star Spencer Heywood was even dismissed by the Lakers for falling asleep at practice due to his cocaine addiction.

By 1983, Stern managed to negotiate a drug-testing policy that made the NBA the first major sports league in North America to adopt the measure.

Financially, teams had teetered on the edge even after the ABA-NBA merger in 1976. A year after the two leagues came together, the Indiana Pacers held a 16½ hour telethon to sell 8,000 season tickets just to stay solvent.

When the New Orleans Jazz were making their move to Utah in 1979, owner Sam Battistone commented about acquiring new uniforms, “I have no money…I can’t afford it.”

Increasingly, the franchises were relying on league sponsors to cover their costs. But even that had its challenges since advertisers were leery.

In one of Croatto’s interviews, NBA marketing chief Mike Suscavage recalls a Campbell’s Soup executive bearing witness to a violent altercation during Game 2 of the 1977 Finals. His reaction was: “We are a family-oriented brand…It’s tough for me to justify spending money against this.”

By the end of the 1980s decade, most of the drug problems that plagued the league were in the rear-view mirror and the financial landscape had completely changed.

In 1989, the NBA abandoned CBS, its long-time broadcaster, for a new contract with NBC worth $600 million, up from $88 million just 7 years earlier.

It presaged the 1990s, which were about international expansion with new markets and greater licensing and merchandising opportunities.

Head of global marketing & media David Schreff saw 'The Dream Team' in Barcelona during the 1992 Olympics as “bigger than the Beatles on some level, because the Beatles didn’t have as many marketing people behind them.”

Croatto’s book fades out with the league’s 50th anniversary celebration at the 1997 All-Star Game.

It’s a fitting ending as Stern pays homage to the legends of the past- Magic, Bird, Dr. J and many others- in front of the stars of the present- Jordan, Ewing, Olajuwon, etc.