Before Golden State, The Philadelphia Warriors 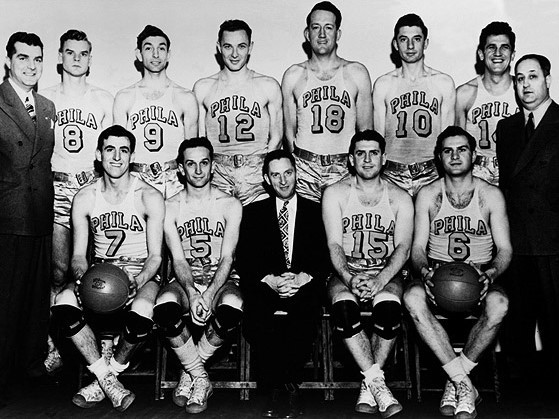 The Golden State Warriors’ third consecutive trip to the finals coincided with a less heralded, but equally important milestone- the 70th year anniversary since the original Warriors won the NBA’s first championship.

Founded by entertainment promoter Peter Tyrrell in 1946, the Philadelphia Warriors (photo above) were born to a bygone era when sports teams formed and folded nondescriptly. Their name was adopted from a defunct team that had played in the 1920’s.

The Warriors were one of eleven squads organized under the newly-created Basketball Association of America (BAA). Today’s only original survivors of the BAA are the New York Knickerbockers and Boston Celtics.

Teams like the Pittsburgh Ironmen, Providence Steamrollers and Toronto Huskies disappeared into red ink oblivion. Others like the Minneapolis Lakers, Fort Wayne Pistons and the Philadelphia Warriors found new homes over time.

Overtaking the St Louis Bombers in the first round of the playoffs, the Philadelphia Warriors went on to defeat the New York Knicks in the semi-finals and then the Chicago Stags in the finals with a score of 4-1.

6’5”, 25-year old Fulks walked away with the league’s first scoring title, shooting 23.2 points per game average. Two seasons later, the Kentucky native landed 63 points in a single game playing against the Indianapolis Jets, a record that held for the next ten years.

The NBA counts the BAA years as its founding history, not the NBL, making the Philadelphia Warriors the first official champions and Joe Fulks the league’s original high-scoring sensation.

Veteran basketball manager Eddie Gottlieb coached the Philadelphia Warriors from the outset. A greater than life figure, Gottlieb’s future influence and contribution to professional basketball led to his namesake NBA Rookie of the Year award, the Eddie Gottlieb Trophy.

Gottlieb bought the Warriors from Tyrrell in 1952 for $25,000. In addition to Joe Fulks, the team’s golden era roster included Villanova alum Paul Arizin, who along with Neil Johnston and Tom Gola, carried the Warriors to their second championship victory in 1956.

Fulks, Arizin, Johnston and Gola all became Hall of Famers.

Topping off the Warriors’ player list was the indomitable 7’1” Harlem Globetrotter, Wilt Chamberlain. “Wilt the Stilt” signed on in 1959 for a $30,000 contract, the NBA’s highest at the time and $5,000 more than what Gottlieb had paid for the franchise.

Though he never won a championship with the Warriors, the masterful Chamberlain averaged 41.5 points per game during his five and half seasons with the franchise.

In 1962 and under a new owner, the Philadelphia Warriors relocated to the west coast as the San Francisco Warriors. Gone but not forgotten, the old Philadelphia days gave way to another era with a new franchise, the 76ers.

Rebranded the Golden State Warriors in 1972, the team claimed their third NBA title in 1975 before settling into a long drought.