The New England Patriots Before the Dynasty

Homeless and hapless, they finally get a stadium and abandon ‘Boston’ for ‘New England’

Standing in front of a dazzling display of 6 Super Bowl trophies, it’s easy to forget that the New England Patriots had a 40-year history before Bill Belichick and Tom Brady

The New England Patriots Before the Dynasty

Homeless and hapless, they finally get a stadium and abandon ‘Boston’ for ‘New England’ 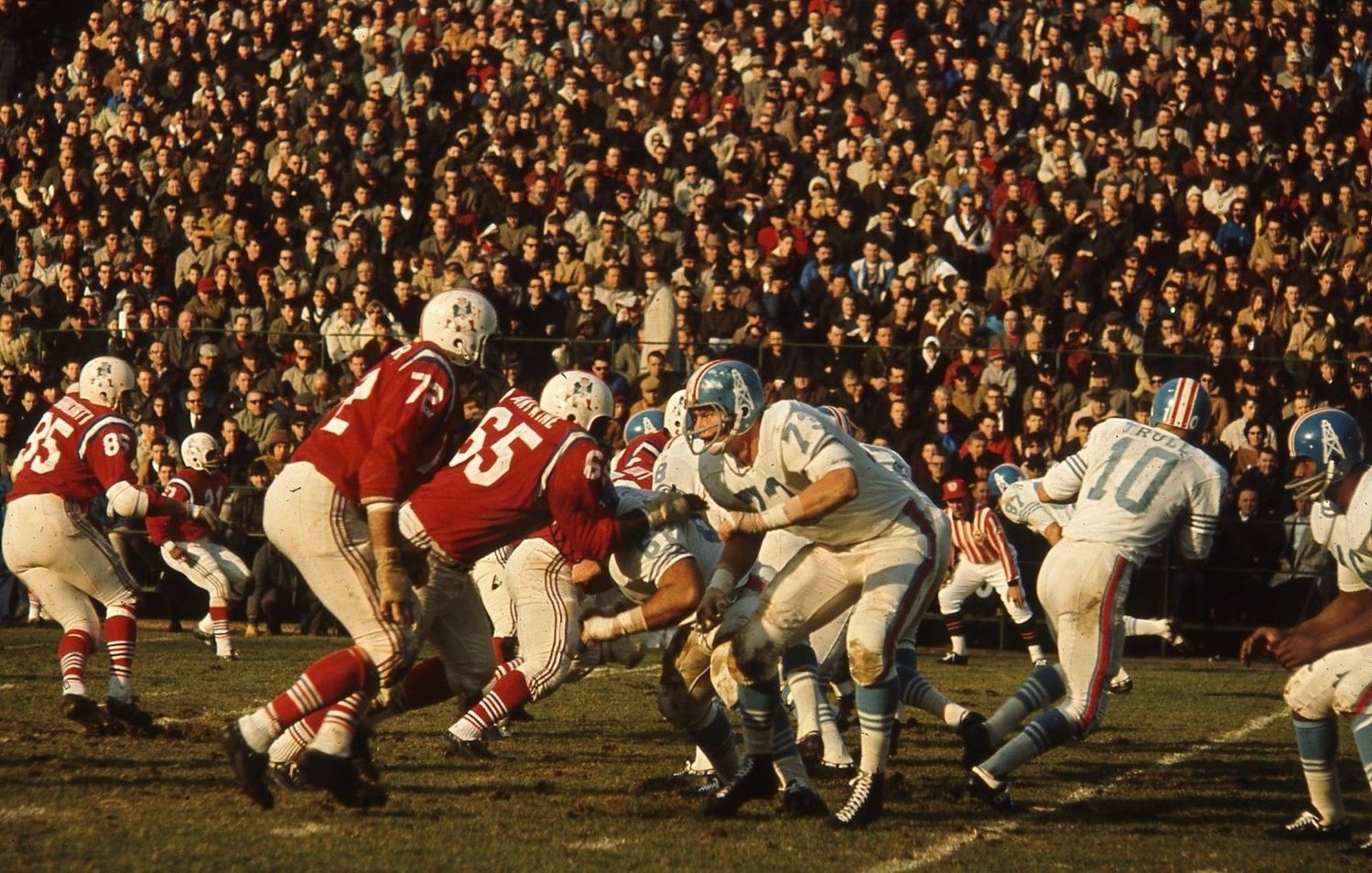 Standing in front of a dazzling display of 6 Super Bowl trophies, it’s easy to forget that the New England Patriots had a 40-year history before Bill Belichick and Tom Brady reshaped the team’s destiny.

A walk through the Patriots Hall of Fame in Foxboro, Massachusetts reveals the tremendous achievements of the franchise over the past 20 years, but it also offers a glimpse into the early days when the team struggled to find their place on the gridiron.

Built in 2008 and sponsored by Raytheon Technologies, the Patriots Hall of Fame houses a rich collection of team memorabilia and exciting interactive displays that even football agnostics will find impressive.

Behind glass cases is the football that Tom Brady passed in his 400th touchdown, the sweatshirt that Bill Belichick wore on his 250th career win, the cleats that Adam Vinatieri wore when he kicked the winning field goal in Super Bowl XXXIX against the Philadelphia Eagles, and much more.

Visitors can also hear Brady call plays in a life-size huddle, watch Belichick use a telestrator to illustrate different plays, be the judge on an instant replay camera, and even kick field goals in a simulator.

But beyond the immersive digital experience are historical artifacts that take us back as far the 1960s, long before the dynastic period. In an exclusive tour for Sports History Magazine, museum Curator Kurt Evans brought out the original letter dated November 18, 1959 that awarded the team to William Sullivan, a Boston businessman.

Signed by Lamar Hunt, founder of the American Football League (AFL), the correspondence confirms Sullivan’s payment of $25,000 for the franchise. Considering the Patriots are worth $5 Billion today, the 2nd most valuable team in the NFL after the Dallas Cowboys, one has to pause for a head-scratching moment.

The Great Escape- the Baltimore Colts abandon their city

Sullivan’s team was the 8th and final franchise to join the AFL. He held a local contest to come up with a name and ‘Patriots’ emerged as the most popular among fans. Archived at the museum is also the original sketch for the team’s helmet design- 2 red stripes running down the center with colonial hats imprinted on either side.

Coached by Lou Saban, the Boston Patriots played their first ever regular season game on September 9, 1960 at Boston University Field, losing to the Denver Broncos 13-10. They wrapped up the season with a 5-9 record, which placed them last in the AFL’s East Division and second worst in the upstart league.

Throughout the 1960s, the Patriots never enjoyed a home stadium, playing at fields belonging to Boston University, Boston College, Harvard, and at Fenway Park, home of the Red Sox. They ran the ball in only one AFL championship game (1963), which they lost to the San Diego Chargers 51-10.

An interesting artifact stored at the Hall of Fame is Lou Saban’s letter to newly-elected President, John F. Kennedy (May 8, 1961), noting that the Patriots are in “desperate” need of “fine receivers” and asking him to attend games of his “favorite” professional football team.

Two years later, in the second half of November (1963), all AFL games were postponed due to President Kennedy’s assassination. There is a note referencing the event in Gil Santos’ binder, which is also on public display. Santos was the Patriots’ radio announcer for 36 years.

It took 10 years for the Boston Patriots to acquire their own stadium (1971) and 26 years before they made their second playoff game (1976). In the first 2 decades, they went through 5 different coaches and posted mixed results, hitting their nadir in the late 1960s and early 1970s.

Following the AFL-NFL merger in 1970, and after recording their worst season at 2-12, Sullivan’s team finally got a permanent home in Foxboro and were rebranded the ‘New England’ Patriots.

Under Coach Chuck Fairbanks, the red, white and blue uniforms made the playoffs in 1976, reversing the previous year’s misfortunes (3-11) and turning in a bonanza season (11-3). Fairbanks was named NFL Coach of the Year and Mike Haynes NFL Rookie of the Year.

Still, the Patriots fell to the Oakland Raiders 24-21 at the post-season Divisional game, a match that old-timers still recall with a heavy heart due to what they believed was a ‘phantom’ call on roughing the passer, which cost them the game.

1944 Army & Navy Football- as war rages abroad, the two face off at home

Less than a decade later, under Coach Raymond Be0rry in 1985, the Patriots clinched the AFC Championship for the first time in franchise history, overtaking the Miami Dolphins 31-14 to win a berth in Super Bowl XX.

Ahead of the faceoff against the Dolphins in Miami, Patriot fans coined the term “Squish the Fish”, which was turned into a popular T-shirt after they won the Conference title; that logo is on display at the museum. However, at the Super Bowl, they were crushed by the Chicago Bears 46-10.

Nevertheless, the late 1980s and early 90s ushered in a period of financial turmoil that also saw a turnover of 6 coaches and a changeover of 3 owners by the time Robert Kraft took hold of the organization.

Sullivan ran into financial problems and sold the Patriots to Victor Kiam in 1988 ($83 million), who later faced bankruptcy himself and was forced to sell the team in 1992 to one of his creditors, James Orthwein ($106 million). A wealthy outsider, Orthwein was connected to the Anheuser-Busch family from St. Louis, Missouri.

The new owner hired Bill Parcells as Head Coach in 1993, but harbored plans to transfer the team to his home town in St. Louis. As a marketing initiative in anticipation of the move, Orthwein created visor caps with the logo “St. Louis Stallions”, which would have been the team’s new name.

Those caps are displayed at the Hall of Fame and are a compelling reminder that Patriots fans came close to losing their professional football team. It was Robert Kraft, the knight in shining armor, who held the lease on the stadium and prevented Orthwein from whisking the franchise out of New England.

That episode, a pivotal moment in Patriots history, is captured in the form of an oversized check behind a glass case. Dated December 21, 1994 and written in the amount of $15 million, it was Kraft’s down payment for the team, which he bought for $175 million.