When Art Was an Olympic Event 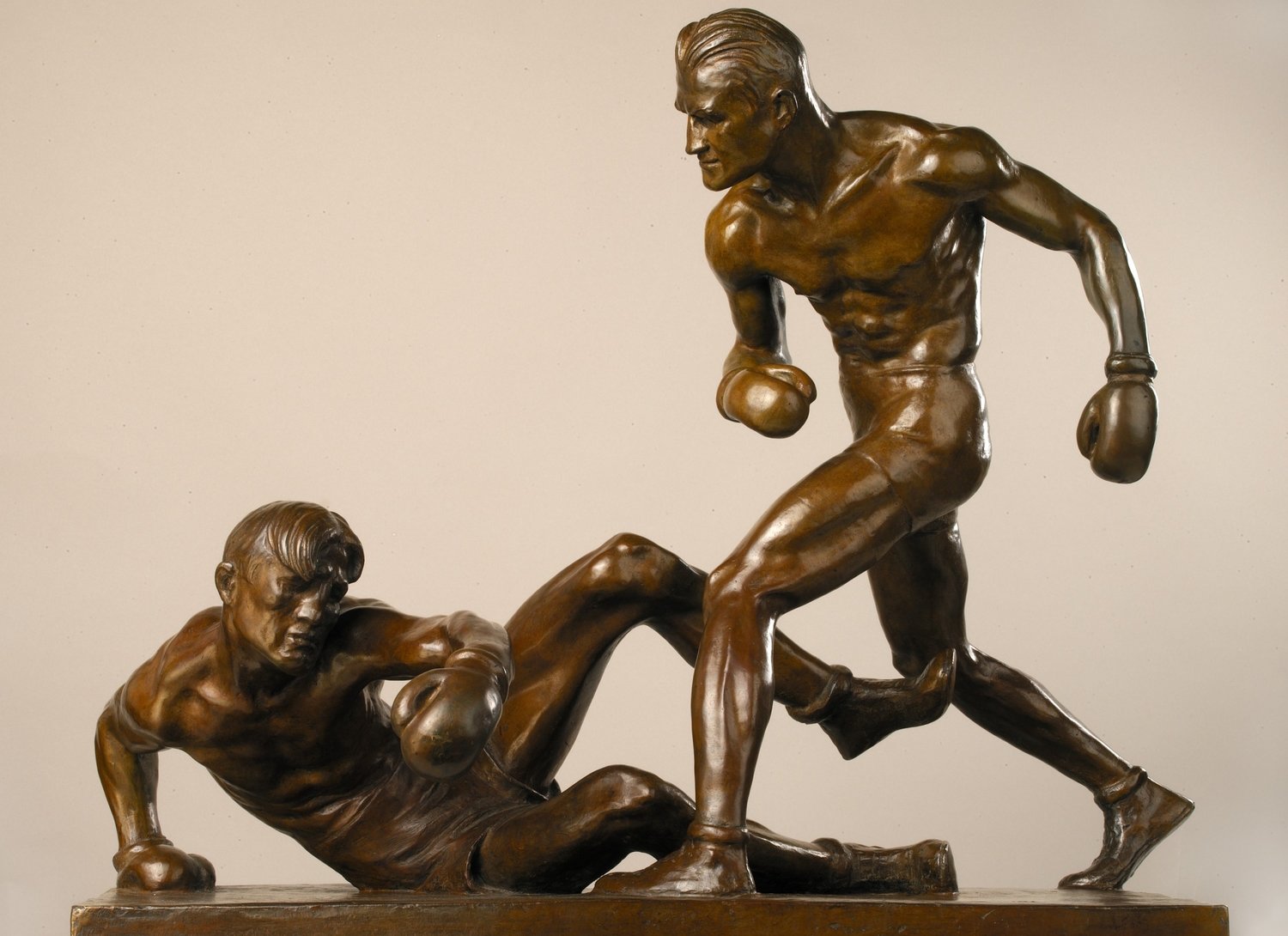 'The Knockdown', a bronze sculpture created by American artist Mahonri Young that won gold at the 1932 Olympics.
Posted Sunday, July 25, 2021 8:00 am

Great athleticism can be seen as a form of art, but can art itself be classified as a sporting event? Maybe not with strength and endurance, but with beauty and inspiration.

Between 1912 and 1948, seven Olympiads incorporated art into their programs of competition with the same mix of gold, silver and bronze medals awarded to the top contenders. To qualify, artists were required to be amateurs, their works needed to be original, and the themes had to center around sports.

It was Baron Pierre de Coubertain, founder of the modern Games, who campaigned for the inclusion of art in the Olympics. Coubertain maintained that art exhibitions and athletic tournaments, jointly embraced in ancient Greece, is what separated the Olympics from ordinary sporting championships.

As the French aristocrat struggled to build the international event from the ground up, he couldn’t persuade the over-stretched organizers of the first 4 Olympiads- Athens (1896), Paris (1900), St. Louis (1904), and London (1908)- that art should be an integral part of the competitions. But he finally secured a place for his vision at the Stockholm Olympics(1912).

Five major art categories were selected for the quadrennial events: painting, sculpture, architecture, literature and music. The initial entries were disappointing with only 35 artists submitting their works. When the Olympics moved to Antwerp (1920) after a pause during WWI, the contests were still considered little more than a side-show.

Fearing that art wouldn’t draw enough entrants, Coubertain himself turned in a lyrical poem called Ode to Sport, an homage to the pleasure, beauty, honor, and peace that sports competitions evoke. He penned it under a pseudo-name and ended up winning gold in Stockholm in the literature category.

But once in Paris (1924), Olympic art was taken more seriously. The ‘City of Light’ saw 193 artists send in their creations, including 3 Soviet artists during a period when the Soviet Union regarded the Olympics as a bourgeois festival. It wasn’t until 1952 that the USSR first entered the prestigious sports tournaments.

The exhibitions gained popularity in Amsterdam (1928) as 1,100 paintings, drawings and sculptures went on display. Four years later, athlete attendance in Los Angeles dropped due to the city’s remote location and the economic impact of the Great Depression, but interest in art remained strong.

At the Los Angeles Museum of History, Science & Art, 384,000 visitors toured the exhibition halls while the Games were taking place. Avery Brundage, a 1912 Olympian who later rose to become the IOC’s influential President, submitted a work of literature and though he didn’t win a medal, he received an honorable mention.

Art was contested in Berlin (1936), suspended during the WWII years, and then made its final appearance at the Olympics in London (1948). Since its inception in 1912, a total of 1,817 artists from 51 countries participated and 147 medals were distributed.

During those 3½ decades, Germany led the nations with the highest medal count at 24, followed by Italy and France at 14 each. The U.S. came in 4th place with 4 gold and 5 silver for a total of 9 accolades.

Among Germany’s top prizes were Adolf Henzel’s town planning achievement for a park outside Nuremberg (gold, 1928) and Werner March’s architecture award for the Berlin Reich Stadium (silver, 1936) where the Games of the XI Olympiad took place. Those facilities would later serve as venues for Nazi party rallies.

The most successful individual artist at the Olympics was Luxembourg native Jean Jacoby, who took gold in 1924 for his painting, Etude de Sport, and another gold in 1928 for his drawing, Rugby. An illustrator with a focus in sports, Jacoby would later design postage stamps for the 1952 Olympics.

At the age of 73, Britain’s John Copley became the oldest Olympian to win a medal when he took silver in London (1948) with his engraving, Polo Players. Copley’s medal was one of the final ones distributed before art competitions were scrapped entirely from the Olympics.

From the U.S., Mahonri Young won gold at the Los Angeles Games with his sculpture, The Knockdown. The bronze work depicts a dramatic boxing match, with one fighter towering over the other after flooring him with a punch. Today, that same sculpture is on display at the Smithsonian American Art Museum in Washington, DC.

John Russell Pope, an American architect whose prints would be behind the Jefferson Memorial and west wing of the National Gallery of Art in Washington D.C., won silver in architecture for designing one of the largest indoor athletic facilities in the world, the Payne Whitney Gymnasium at Yale University.

Some contestants even emerged as dual medalists in both sport and art. Walter Winans, a U.S. citizen born in imperial Russia, was a veteran Olympian who claimed gold (London, 1908) and silver (Stockholm, 1912) in marksmanship. A renaissance man who bred horses and grew up in privileged surroundings, he also earned the top prize in Stockholm for his harness-racing sculpture, An American Trotter.

While most contestants were obscure figures even in their own home countries, several names were prominent, or connected with renowned families. Jean Rene Gauguin, the 4th child of French post-impressionist Paul Gauguin, won bronze with his sculpture, Boxer, at the Paris competitions.

Rembrandt Bugatti, younger brother of the Italian car manufacturer that still bears his name, entered one of his works in Stockholm, but failed to reach the podium. In 2014, in recognition of the family’s artistic roots, the auto company rolled out its 4th generation Legends model and named it the ‘Rembrandt Bugatti’.

On the jury panels, musicians Igor Stravinsky, Maurice Ravel, and Bela Bartok sat as judges at the 1924 competitions in Paris. But they had problems selecting winning compositions since they were entered on paper. As such, no awards were handed out and it wasn’t until 1936 when musical works were actually played before an audience.

Over time, these off-the-field contests became controversial as most artists were deemed professionals and not amateurs like their fellow athletes. Some of the works were even sold while on display, essentially violating the Olympic charter and purity of the games.

It was Brundage and his obsession with absolute amateurism who took aim against these non-athletic affairs. Since the beginning, many in the art world also remained distrustful of the process, believing their reputations might be damaged if they failed to win a medal.

Relegated to history, art competition came off the Olympics agenda after 1948. The medals were also stripped from the IOC’s official tally and nullified from each country's list of achievements. Still, in keeping with Coubertain’s lofty ideals, art exhibitions remained part of the cultural showcase associated with the Games.