Cut by the NBA, He Found Fame in Communist Poland

Kent Washington, the first American to play pro behind the iron curtain 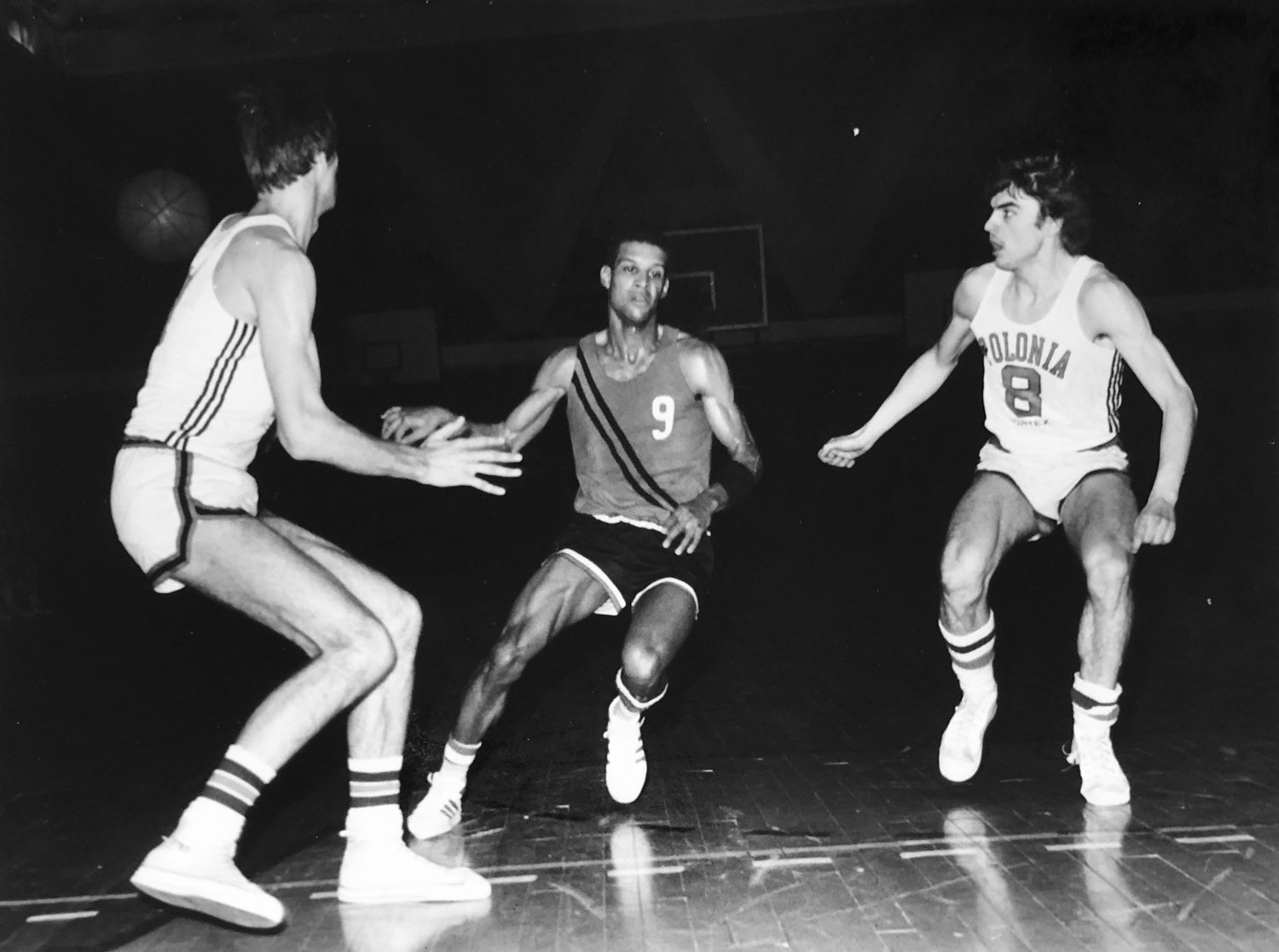 Kent Washington in action against Polonia, a rival team in the Polish Basketball League. In 1979, he became the first American pro to sign up behind the iron curtain.
Posted Sunday, January 8, 2023 8:00 am

The Polish press called it ‘Kentomania!’, an American basketball player who filled arenas beyond capacity and dazzled audiences with his quick and fancy ball skills.

In 1979, at the age of 23, Kent Washington became the first American and first black American to sign a professional sports contract behind the iron curtain.

His basketball odyssey across the ocean took him through 4½ seasons in Poland, followed by another 10 seasons in Sweden where he also met his future wife.

In 2019, Kent was contacted by a Polish journalist who wanted to write a 40-year anniversary article about his time playing in the Polish Basketball League. Surprised that his legacy was still alive, Kent was inspired to write a memoir, ‘Kentomania: A Black Basketball Virtuoso in Communist Poland’.

The self-published book is a personal journey of a talented athlete whose uncompromising passion for basketball landed him in a foreign land.

Immersed in a culture with strange customs and an unfamiliar language, he learned more about himself and the world than he ever imagined.

Kent’s destiny as a ball handler in Poland was as surreal as it was unlikely. At the time, the country was one of America’s cold-war foes and free agency transactions with East European clubs didn’t exist.

He grew up in a close-knit family in New Rochelle, a northern suburb of New York City. His father was the city’s first black police detective and his older brother attended nearby Iona College.

Standing at just 5’8, Kent shined as a point guard at New Rochelle High School with his dribbling prowess and agility on the court.

“I had a special knack for ball handling and passing,” he says in an interview with Sports History Weekly.

Kent graduated in 1973 and was named All-County and All-League that year. He earned a scholarship to Southampton College, a Division II program in eastern Long-Island where he won numerous accolades, including Honorable Mention All-American (1977) and Empire State Games Gold Medalist (1978).

A self-described obsessive-compulsive ball player, Kent spent tireless hours practicing on his own, including outdoors in the dark where he honed his dribbling skills without seeing the ball.

Following his junior year in 1976, his life changed forever.

That Spring, Southampton College, along with Albany State University and St. John’s University (Minnesota), were invited to play a series of exhibition games against professional basketball clubs in Poland.

Tall, strong and highly skilled, the Poles were no pushovers on the court. Southampton lost their first match against Warsaw’s Legia, but the kid from New Rochelle scored 29 points.

It didn’t take long for the local fans to be swept away by Kent’s wizardry.

He was mobbed by fans and the next day, the newspapers published his photo and described his style: “It was not a game, it was a show…Kent is an artist who plays basketball.”

At warm-ups before games, Kent would dribble inside the sidelines and across the court looking for dead spots where the ball failed to bounce properly. The 3-second zone was also a trapezoid and low post players needed to manage their footwork differently.

Once a match got going, the deafening noise inside the arena drowned out the referee’s whistle and the sound of the ball hitting the floor.

Describing the Poles’ strategy, he remembers: “They played a fast-paced passing game with a 30-second shot clock [not yet implemented by the NCAA]. The ref didn’t touch the ball unless there was a foul, or a time out.”

One evening when he was resting in the hotel room, he was called downstairs by the team’s Polish translator. The head coach of one of the squads they played, KS Start, asked to speak to him.

Right there, he offered Kent a contract to play for KS Start in the town of Lublin. Flabbergasted, the Southampton point guard responded that he needed to finish college first. The coach said he was willing to wait and gave him his contact phone number and address.

Kent kept that conversation secret from his teammates and from coach ColClough.

Back home in his senior year, he averaged 23 points and 8 assists per game, and shot 55%. After graduating from college, Kent headed out West for a late 10th round draft pick by the Los Angeles Lakers.

He played in their summer camp tryouts, but was cut from the team and failed to advance to the fall tournament.

Kent harbored no illusions about making the NBA, but he remained undeterred. His love of basketball and relentless drive turned his thoughts to Europe.

“I realized that during my college experience there [Poland], the fans loved my style,” he thinks back about his decision to go abroad.

Kent telegrammed his contact in Poland and on January 4th, 1979, he boarded a plane to Warsaw.

He signed a short-term contract with KS Start and was paid 20,000 zlotys a month, a pittance by U.S. standards but a sum that went a long way in a consumer-deprived, centralized economy.

At first, KS Start’s coach had problems realizing synergies around his new facilitator. The playing philosophy in Poland has always been “the ball moves, the bodies move,” which meant that passing and hustling trumped dribbling and shooting.

“The challenge was coordinating my skill sets with theirs,” Kent remembers. Unlike in the U.S. where positions were specialized, their players were complete and even the big men were skilled shooters from the outside.

But soon enough the team found its optimal playing format and the results showed on the scoreboard. KS Start jumped from 7th to 3rd place in Poland’s 10-team professional standings.

They clinched the league’s bronze medal for 2 consecutive seasons and in 1980, Kent was named MVP of the Polish Basketball League.

He became a star and a novelty in a closed, all-white East European society. With the team’s popularity soaring, KS Start was now selling tickets to practice sessions and action photos of Kent became hot memorabilia.

Do you shop on Amazon? support us at SPORTS HISTORY WEEKLY by clicking here and surfing for ANY of your purchase needs

At one point, he was given a cameo role in a comedy film called ‘Mis’ (Teddy Bear), which is still a cult classic in Poland.

His teammates smoked unfiltered cigarettes, drank heavily, and yelled at each other during games. But it was part of the culture and he learned to adapt to his new life.

In club tournaments outside Poland, Kent had a chance to experience the caliber of East European players a decade before they showed up in the U.S.

In one match in West Germany, he played against 19-year-old Arvydas Sabonis, Lithuania’s towering center who would go on to join the Portland Trail Blazers in 1995. "He was a 7-foot, 2-inch athletic Larry Bird,” he recalls.

Off the court, it was baptism by fire. Daily life in a communist country was as challenging as any lone American could expect. Though, by his second year, he no longer needed a translator and a comfortable routine settled in.

BUY- Chronicles of an Olympic Defector

For readers curious about Polish society during that era, 'Kentomania' is peppered with amusing tidbits and anecdotes, from Babcia (Grandma) Kowalska who cooked his meals and washed his cloths, to life under martial law (1982-83) when bartering cigarettes for chicken became a mode of survival.

Kent played for 2 teams in Poland before moving to Sweden where he ran the ball for another 10 years in a quasi-professional league.

But it was his experience behind the iron curtain in Poland that left him with his deepest impressions and lifelong memories.

For media inquiries and speaking engagements, Kent can be reached at: Kentomania9@gmail.com