Football Hooliganism Comes to a Head

English teams are banned from the continent 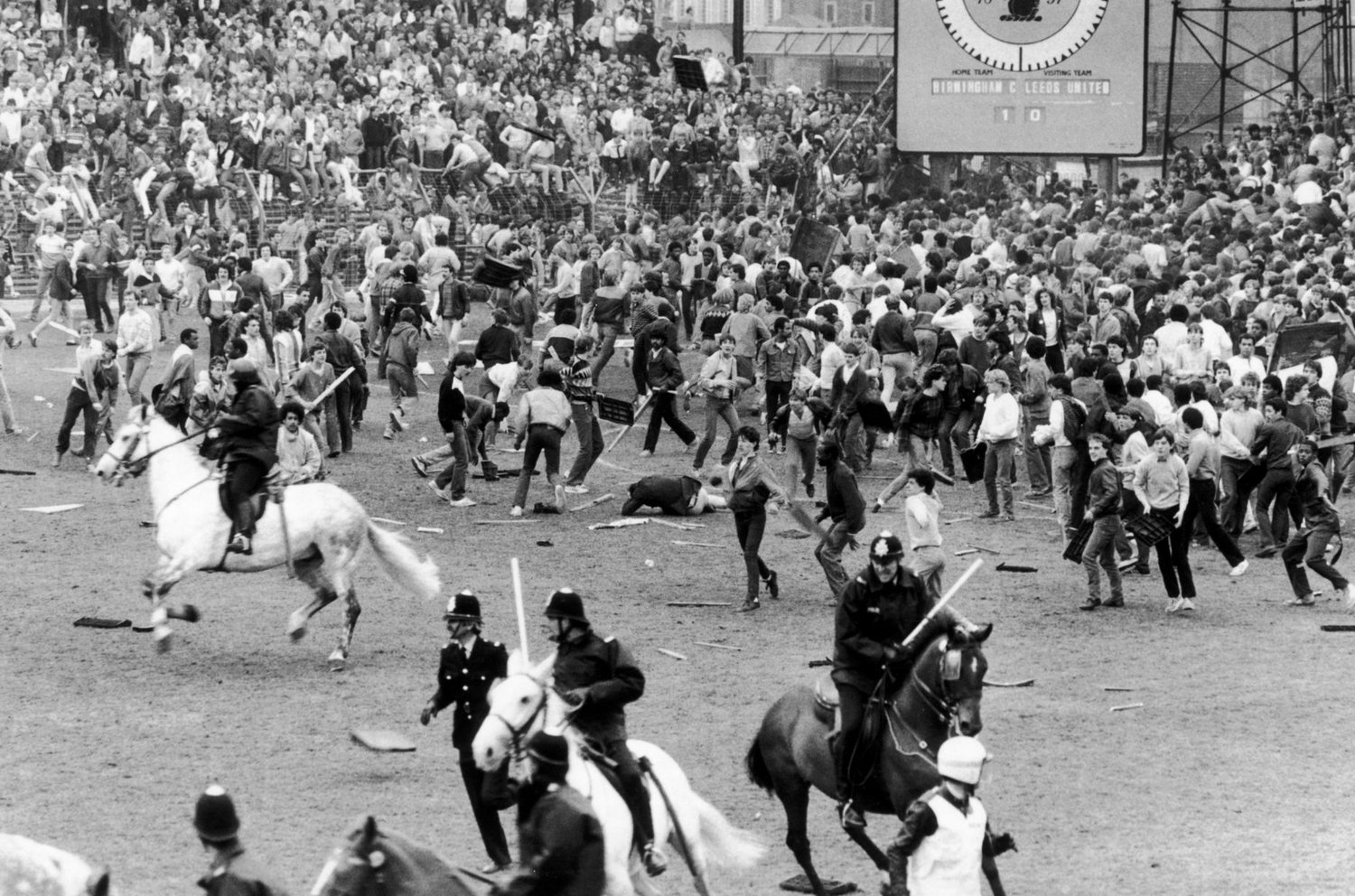 Violence breaks out at a match between Birmingham City and Leeds United in 1985. Football hooliganism was a blight on British soccer during the 1980s.
Posted Sunday, May 29, 2022 8:00 am

Paradoxically, it was the heyday of English soccer. Clubs from across the channel had won 7 of 8 European Cups between 1977 and 1984. But their glory on the field was at odds with the disgraceful behavior of their fans off the field.

It all came to a head on May 29, 1985 at the European Cup final, which pitted two storied football teams, Liverpool and Italy’s Juventus.

Shortly before kickoff in Brussels’ Heysel Stadium, a mob of drunken Liverpudlians charged their Italian counterparts in the stands, creating a melee that resulted in the death of 39 fans and hundreds injured after a wall collapsed.

It was the worst hooligan disaster on record. Within days, the Union of European Football Associations (UEFA) moved to ban all English clubs from competing in the continent for the next 5 years.

Thatcher supported the decision, saying: “We have to get the game cleaned up from this hooliganism at home and then perhaps we shall be able to go overseas again.”

Do you shop on Amazon? Support us SPORTS HISTORY WEEKLY and click here to surf for ANY Amazon products

The ban was a blow to English soccer, especially Liverpool which took the brunt of the punishment with a 6-year prohibition. Liverpool had claimed 4 of the 7 continental titles with stars such as Terrence McDermott, Phillip Neal, and Kenneth Daglish.

Hooliganism reached its crescendo with the tragedy at Heysel Stadium. Europeans were unforgiving and a Belgian court eventually sentenced fourteen Brits to 3 years in jail for involuntary manslaughter.

Thatcher was no fan of soccer, but she understood that something had to be done to curb the violence. The issue was politically charged, too, since she viewed hooliganism as an extension of the sport, while football officials saw it as symptomatic of British society.

Just 3 months before the fiasco in Brussels, spectators rampaged at a match between Luton Town and Millwall at an FA Cup quarterfinal. The stadium was stripped, surrounding houses were damaged, and cars were smashed.

The Guardian called it “a night football died a slow death.” The next day, England, who were favorites to host the 1988 European Championship, lost out to West Germany.

Following the riots, Luton Town implemented a membership-card scheme for spectators and disallowed all visiting supporters for the next 4 years.

Thatcher’s government set up a ‘war cabinet’ to combat the national scourge and tried to implement a similar identity-card policy for all clubs, but it failed to pass in parliament.

Adding to the bleak state of football in 1980s England was a stadium fire that killed 56 attendees during a match between Bradford City and Lincoln City (May,1985) and the Hillsborough disaster that witnessed 97 fans crushed to death during an FA Cup semifinal between Liverpool and Nottingham Forest (April, 1989).

Neither of those incidents were directly attributed to hooliganism, but antiquated stadium conditions and police incompetence were blamed.

Modern security measures such as CCTV, enhanced police powers at games, a ban on carrying alcohol into matches, and elimination of fenced standing terraces are a legacy of that decade.

In general, violence and mayhem at football matches was not limited to English fans, but it was particularly seen as a ‘British Disease’.

Even the word ‘hooligan’ is traced to an 1894 London police report that mentioned a gang called the Hooligan Boys. Over time, newspapers around the world would use the term to describe rowdy and destructive behavior.

Hooliganism was regarded as a cancer that had no simple explanations, nor simple solutions. Reasons cited ranged from tribalism, to social malaise, criminality, and even the decline of the British empire. Alcohol was seen as a fuel, but not a root cause for the violence.

In his chilling book, 'Among the Thugs' (1990), Bill Buford captured the world of English hooligans by embedding himself with the groups at European matches. He writes, “They wanted an England to defend”. “They wanted a war”. “They wanted a nation to belong to and fight for”.

Incidents of unruliness at ‘folk’ games in England were recorded as far back as the Middle Ages when a version of football was played using a leather-bound inflated pig bladder.

In 1314, the mayor of London made a swift decision to forbid football in his town, though it had more to do with the fact that violence was driving away buyers on market days.

“…we do command and do forbid, on the king’s behalf, upon pain of imprisonment, that such games shall not be practiced henceforth within this city.”

Football matured to its current format in the late 19th century and while the middle class codified the rules and administered the sport, the game was overwhelmingly a working man’s pastime.

Most of the soccer fields were built around industrial communities and spectator behavior was at its worst when local rivals played each other.

The inter-war years were relatively quiet in terms of hooliganism, but the frequency of violence started growing after the second world war. 13 incidents were reported between 1946 and 1960, but 25 were registered between 1961 and 1968.

By the early 1970s, hooliganism came to be recognized as a British phenomenon. It also took on racist overtones and right-wing political fervor as more black players started appearing on the field.

In 1975, Leeds United became the first team to be tried and sentenced from European competition when their fans rioted at the European Cup final against Bayern Munich in Paris. It foreshadowed the actions that would be taken 10 years later.

English clubs were back on the continent in 1990. The national team reached the semifinals at the 1990 World Cup in Italy and a year later, Manchester United succeeded in hoisting the UEFA Cup.

Shortly after, the sport underwent an image transformation and was ‘sanitized’ with the launch of the Premier League in February of 1992. Driven by lucrative TV contracts, the game was resold and repackaged as wholesome family entertainment.

Hooliganism didn’t disappear, but with enhanced security measures and improved stadium designs, much of the random violence moved off-site and even to pre-arranged locations where extreme groups would meet up for a fight.

Closing the door on football’s dark decade, sports reporter Jeff Powell of the Daily Mail said: “football became a national passion instead of a national shame”.