A Passion for Sports and a Gift for Selling

A publishing executive recalls the years 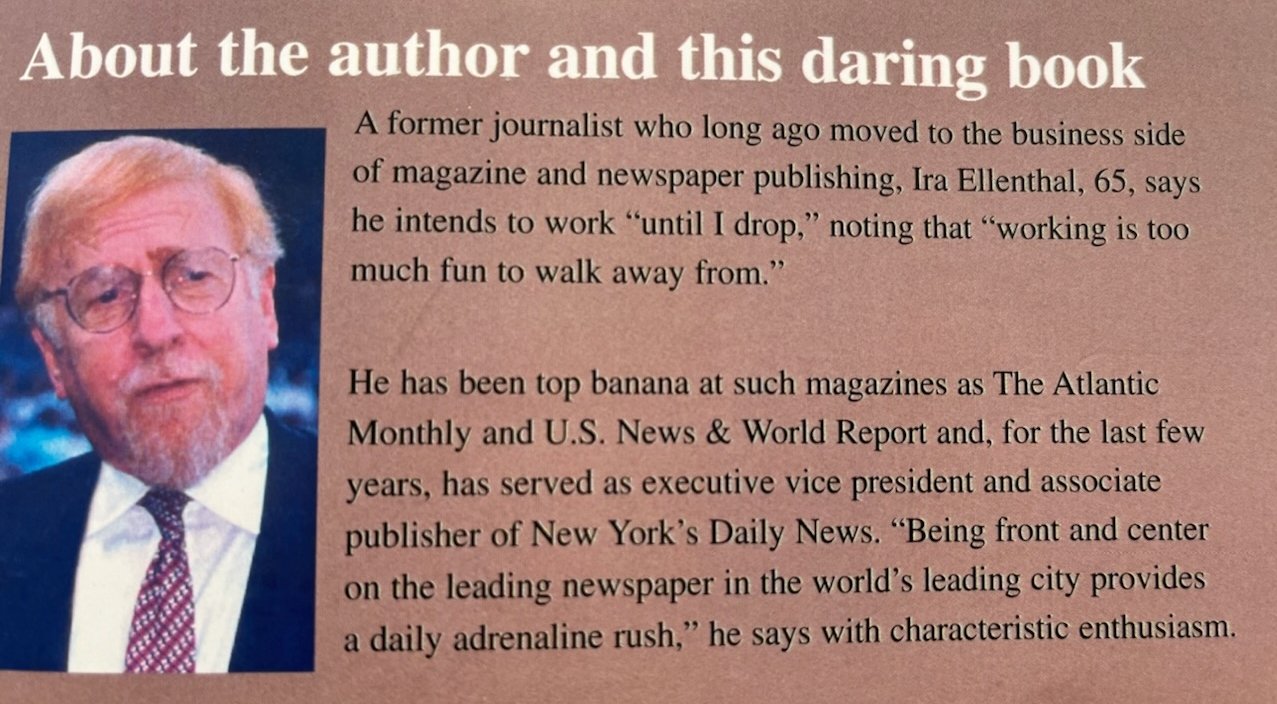 “I was very adept at creating big ideas for the sports department,” says Ira Ellenthal. At a restaurant close to his home in Old Greenwich, Connecticut, the well-connected publishing veteran spoke about his personal and professional life around sports, and finding his true calling in media sales.

As a young man, Ellenthal was on a trajectory to become a sports writer but somewhere along the way he discovered the business side of print media. It served him well as he rose to become the CEO and group publisher of U.S. News & World Report, The Atlantic, and Fast Company Magazines.

Decades later, he lent his gift to a book he wrote, "

The Last Book About Selling You’ll Ever Need”, which was widely hailed for its many real-life anecdotes on the topic.

In the early 1990s, Ellenthal assumed the helm at the New York Daily News, putting his magic touch on a leading tabloid in one of the leading cities in the world. The fight for readers and sponsors in Gotham was stiff, especially with the New York Post, a rival paper that was absorbed by Rupert Murdoch’s NewsCorp.

Sports were always in his consciousness. In 2001, at the Daily News, he sold ads that promoted “61”, an HBO made-for-television sports drama directed by Billy Crystal. The title of the film referred to the 1961 Yankees season when Roger Maris and Mickey Mantle were vying to break Babe Ruth’s 1927 single-season home run record (60).

Maris ended up winning the contest, knocking his 61st homer of the year off Tracy Stallard, a Boston Red Sox pitcher. It was the final game of the regular season and the ‘Bronx Bombers’ eventually went on to defeat the Cincinnati Reds 4-1 at the World Series.

For Ellenthal, running the lucrative “61” advertorials for 6 straight days was more than just business, it was a throwback to his earlier life. An avid Yankees fan since childhood, he was a 24-year-old copyboy for a wire service when the pin stripes won their 19th national title.

Now 84 years old, he digs back and remembers traveling to Yankee Stadium with his family when their star players were still serving overseas in WWII.

“I was yet to worship any heroes because practically all of the good players were still in the armed forces.”

His father and older brother fired his imagination with stories of the 1941 Yankees, including Joe DiMaggio’s 56-game hitting streak, and the team’s World Series victory over their cross-town rivals, the Brooklyn Dodgers.

Ellenthal was 10 years old when he witnessed a play that never left him. In a double-header against the St. Louis Browns, with a runner on third and one out, a Browns hitter bunted a ball that traveled no more than a foot in front of home plate. Yankees catcher Yogi Berra pounced on the ball, tagged out the batter as he left for first base and then did the same to the runner coming in from third.

“I'm not sure that any other catcher has ever duplicated that feat,” he notes.

Ellenthal grew up in a working-class family in the Far Rockaway section of Queens. His father, “Slootie”, a rough-hewn product of New York City’s mean streets, seemed to spend much of his life settling scores. He sharpened his skills in the boxing ring and fought 32 professional fights.

Slootie’s bouts weren’t sanctioned and he made money by peddling tickets to his own matches. The more fights he won, the more tickets he sold. In a bizarre twist of fate, he landed a union job in the delivery department of the Daily News, working 39 years at the same paper that his son would eventually run.

Ellenthal captured his father’s life in an earlier book he wrote, "

Slootie’s Wars”. With an introduction by Pete Hamill and acclaimed reviews by renowned columnists such as Mike Lupica, “Slootie’s Wars” is an honest, intimate portrait of an old-fashioned street survivor.

Coming out of high school, Ellenthal enrolled at New York University where he became assistant sports editor of the school newspaper. His first interview was Carol Heiss, the 1960 gold medal figure skater who was also attending NYU.

A Division I program at the time, NYU were top basketball contenders and Ellenthal was covering their NCAA tournaments. At the East Regional Semifinal, they defeated future Hall-of-Famer, Jerry West, and his West Virginia squad 82-81 in overtime.

They rolled over Duke to capture the East Regional Final, but then fell to Ohio State at the National Semifinals. It was the last time that NYU made the Final Four and Ellenthal was there to pen the story.

Looking back, he remembers the days when sports writers were protective of the athletes they covered. What happened off the field, both in hotel rooms and locker rooms, was kept under wraps by the press. That all changed in 1970 when Jim Bouton, a former Yankees pitcher, released "Ball Four," a tell-all book that recounted the  escapades of many ball players behind the scenes.

At its peak during his tenure at the Daily News, the sports desk employed 18 staff members- editors, reporters, researchers and columnists. He got to know many local athletes, interacting with several of them, including Art Shamsky (Mets), Willis Reed (Knicks), and Rod Gilbert (Rangers).

On managing the business, he says: “In the old days, there was separation between church and state,” referring to the different functions between the editorial and sales departments. But shrinking circulation and competition with other newspapers forced the two sides to pull together and collaborate.

Following his success with “61”, he expanded the paper’s advertorials. When Foxwoods Resort Casino in Connecticut threatened to drop their $100,000 account at the paper to $35,000, Ellenthal got creative and promoted them as an entertainment destination for New Yorkers, instead of just a gambling resort. The following year, Foxwoods increased their ad budget for the Daily News to $635,000.

Though officially retired, Ellenthal refuses to stop working. He writes, comments and stays in touch with prominent figures in the sports world and the business realm.

Ira Ellenthal's latest book, "The Last Book About Selling That You'll Ever Need" (Amazon, $16.95), is being widely hailed for its many real-life anecdotes on the subject of sales. As one pundit explains, "Instead of preaching, Ellenthal tells stories in order to impart his deep knowledge of the subject, many of which will make you laugh as you learn."