A docudrama sheds light on the fringe sport of bodybuilding

Long the domain of a small but dedicated group of muscle enthusiasts, bodybuilding burst into the mainstream in the late 1970s as part of the fitness craze that swept the country.

A docudrama sheds light on the fringe sport of bodybuilding 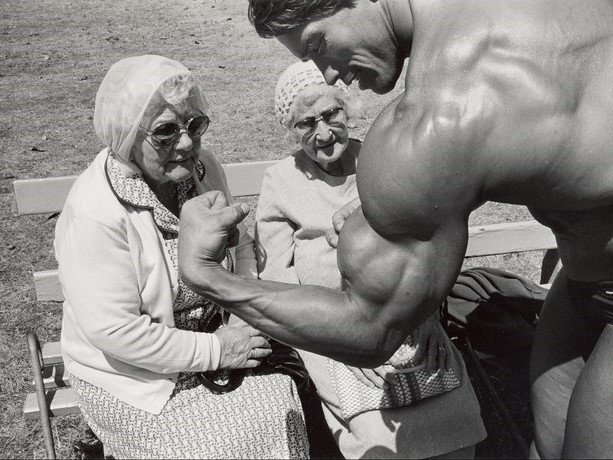 Arnold Schwarzenegger displaying his goods in front of two older ladies. The 1977 film "Pumping Iron" made him a household name and helped push bodybuilding into mainstream America.
Posted Sunday, November 14, 2021 8:00 am

Long the domain of a small but dedicated group of muscle enthusiasts, bodybuilding burst into the mainstream in the late 1970s as part of the fitness craze that swept the country.

One of the catalysts for its explosion was the 1977 release of “Pumping Iron”, a docudrama that featured an Austrian immigrant and a group of body-sculpting devotees.

In 1975, photographer George Butler and writer Charles Gaines embarked on a risky film project to capture bodybuilding, a niche sport that was largely overlooked, if not ridiculed, by the public. They were tapping into a subculture that despite having a weird and wacky image, enjoyed a rooted history with its own set of heroes.

Late 19th century strongman Eugen Sandow was the first to add muscle flexing to his display of raw strength. The “father of modern bodybuilding” posed, stretched, and modeled his body to the classical Greek ideal. In 1901, he organized the world’s first major bodybuilding contest at London’s Royal Albert Hall.

Charles Atlas sold his muscle fitness program through cartoon ads. One of his most enduring comic strips from the 1940s was a hapless skinny kid who had sand kicked in his face and his girlfriend stolen by a beach bully. After ordering the Charles Atlas workout guide, the victim returns to the beach to beat up the bully and reclaim his girl.

Steve Reeves took his handsome, chiseled physique to the big screen with a string of low budget ‘sword and sandal’ movies. He played muscular characters such as Hercules and Goliath in the late 1950s and early 1960s and at the peak of his career, was the highest paid actor in Europe.

Butler and Gaines met Arnold Schwarzenegger in 1972 in Baghdad, Iraq, at the Mr. Universe contest. Unlike in the U.S., male bodybuilding in the Middle East enjoyed a wide following and the event was a national extravaganza.

Two years later, they released their book "Pumping Iron: The Art & Sport of Bodybuilding" with Arnold on the cover. It became a New York Times bestseller.

Raised in a small village in Austria, Schwarzenegger started lifting weights at 15 and as his muscle mass grew, so did his ambitions. In 1967, at the age of 20, he won the Mr. Universe title, the youngest ever to reach the top of the he-man podium. A year later, Schwarzenegger relocated to Los Angeles where he began working out at Gold’s gym, the mecca of bodybuilding.

It was Joe Weider who encouraged Schwarzenegger to move to the U.S. and pursue the raw iron discipline. Joe and his brother Ben founded the International Federation of Bodybuilders, which launched the first Mr. Olympia contest in 1965 to enable amateur Mr. Universe participants to compete professionally.

A legendary figure in the business, Weider promoted fitness as a lifestyle and bodybuilding as an international sport with Olympic aspirations (never accepted). He went on to run an empire of nutritional products, fitness equipment and magazines that included Muscle & Fitness, Flex, Men’s Fitness, and Shape for women.

Nicknamed the “Austrian Oak”, Schwarzenegger had reigned supreme as Mr. Olympia for five straight years from 1970-74. When Butler and Gaines set out to work on their documentary, they couldn’t find investors who were excited about the fringe sport.

Their solution was to add tension and rivalry and create a docudrama instead, starring two leading weight-lifters competing for the 1975 Mr. Olympia title.

Lou Ferrigno was brought in as Schwarzenegger’s antagonist. At 6’5” and 275 lbs., the Brooklyn-born towering figure was runner-up in the previous year’s contest and his presence added to the storyline drama.

Other weightlifters featured in the background included Ed Corney, Franco Columbu, Mike Katz, and Serge Nubret. Bound by a passion for musculature, these early bodybuilders were diverse in character and origin. Katz had played pro-football for the New York Jets, Columbu was a former boxer from Sardinia, Italy, Corney hailed from Hawaii and Nubret was born in Guadeloupe.

Showing heart, soul and guts behind the preparations of a bodybuilding contest, the film contrasts Arnold’s outgoing and aggressive personality with Lou’s quiet and reserved side.

The defending champion is shown working out at Gold’s gym and in the outdoors at muscle beach, accompanied everywhere by reporters and beautiful women. Meanwhile, the man who is seeking to dethrone him is lifting weights unceremoniously in a dimly-lit private basement with his father as trainer.

The  Man Who Revolutionised Weightlifting

But after shooting 100 hours of tape, the project ran out of money and the film went into development limbo for nearly two years. It was finally released after Butler arranged an exhibit at New York City’s Whitney Museum of American Art, called “Articulate Muscle: The Body As Art”.

Paying $5 at the door, thousands lined up to see Arnold Schwarzenegger, Frank Zane and Ed Corney pose as ‘living sculptures’ on a rotating stage. Attendance exceeded expectations and with a running budget of $1 million, “Pumping Iron” premiered at New York’s Plaza Theatre on January 18, 1977 to critical acclaim.

Matching personal charm to his sculpted body, Schwarzenegger took on a cultural iconic status that paved the way for his Hollywood career. Television came calling for Lou Ferrigno as well, as he went on to assume a title role in the series “The Incredible Hulk”.

In the wake the film’s success, hundreds of new gyms sprung up across the country. They were no longer the sweaty dungeons of the past, but air-conditioned workout rooms with state-of-the-art body-shaping equipment.

Coinciding with a general explosion of fitness in America, the fringe pastime of muscle sculpting had now gained a popular following.

A seminal film in the history of the sport, “Pumping Iron” is still remembered today as the screen drama that smashed the old stereotype of bodybuilding and helped raise it to mainstream respectability.