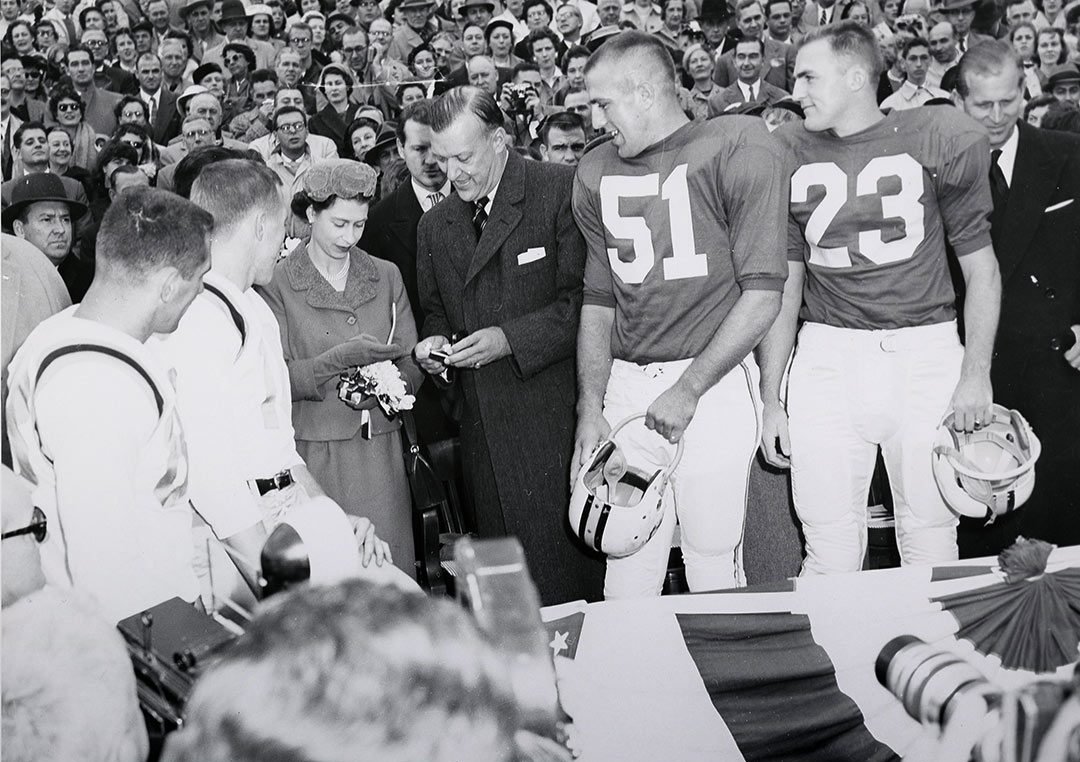 Queen Elizabeth II attending a University of Maryland football game on October 19, 1957. It was Her Majesty's first visit to the United States and an opportunity to witness a quintessential American sport.
Posted Sunday, September 25, 2022 8:00 am

Outfitted in a coral wool suit with a matching hat, the 31-year-old monarch stepped out of a glass-encased vehicle in front of 43,000 football fans who were there for the annual showdown between the Terrapins and Tar Heels.

The young queen and her Prince consort arrived at the invitation of Maryland Governor, Theodore McKeldin, and University of Maryland President, William Elkins.

Five years on the throne, it was Elizabeth’s first official visit to the former American colonies. The occasion marked the 350th anniversary of the founding of Jamestown, Virginia, the first British settlement in the New World.

Six months earlier, learning that the royal couple would be paying a visit to the U.S., McKeldin wrote a letter to the British ambassador:

“Since that happens to be the date of what is perhaps the most important football game of the 1957 schedule of the University of Maryland, we would be delighted and indeed very proud to have Her Majesty and His Royal Highness as guests of the state at this major sporting event.”

The presence of Queen and Prince in front of tens of thousands of spectators was a public relations outreach. Never mind the Terrapins’ underperforming record (2-7-1 in 1956), it was the spirit behind a quintessential American sport that mattered.

“After the war when Britain was no longer a super power, it was important to have this relationship with the U.S.,” notes Taddeo.

Exhibiting all the pomp and pageantry that a college football game can deliver, the event was meant to build American affection for British royalty and was later dubbed the “Queen’s Game”.

Even the cover of the program handout showed the queen sitting in full regalia with a flowing robe and a plumed head dress.

Prior to kickoff, Maryland co-Captains Gene Alderton and Jack Healey, along with their North Carolina counterparts, had the opportunity to meet the blue-blooded guests.

In the previous week’s game against Wake Forest, Alderton's front tooth was knocked out and University officials scrambled to order a new one in time for the royal greeting.

Governor McKeldin gifted the Queen with a jewel-encrusted Terrapin pin, while her avid sportsman husband was given a football signed by all the players.

During half-time, Maryland’s marching band made a formation of Her Royal Highness’ crest, using “ERII” for Elizabeth Regina while playing “God Save the Queen”. In the stands, fans held up cards in configuration of the Union Jack flag.

The University of Maryland has since digitized a collection of photos from the Queen’s Game and they can be seen in these archives.

Alan Levy was a college sophomore sitting with his father high up on the 30-yard line. “I don’t remember Maryland ever selling out a game like that,” recalls the 85-year-old.

There was a lot of buzz on campus about the queen’s visit, explains Levy, but many of the fans also showed up to see the return of Maryland’s former coach, Jim Tatum.

A celebrated sports figure at the mid-Atlantic school, Tatum ran the Terrapins football program from 1947-1955, compiling a record of 73-15-4 and guiding the team to the national championship in 1953 (consensus designation).

Tatum was now back at College Park, but this time as the opposing North Carolina head coach. Since the Tar Heels were favored to win the match, the Terps seemed to have benefitted from a touch of the royal mystique when they upset their rivals, 21-7.

The gridiron battle was tied 7-7 in the 4th quarter when Maryland halfback Ted Kershner broke away for an 81-yard touchdown to claim a 14-7 lead for his team. Shortly after, fullback Jim Joyce completed a 67-yard drive with a 13-yard rush into the end zone.

After the game, Terps head coach Tommy Mont was carried to Her Majesty’s box for celebratory handshakes. It was Mont’s second year at Maryland and admittedly, the most memorable match of his career.

In a documentary made for the University, Mont said it was a day “I will revel in for the rest of my life”. Maryland ended up wrapping their football schedule 5-5, but Mont was fired the following season after posting a 3-year losing record (11-18-1).

Leaving Byrd Stadium on their way to the White House, Elizabeth and Philip made an unannounced stop at yet another very American institution, a supermarket. It was a Giant Food Store (since closed) aptly located on Queens Chapel Road in West Hyattsville, Maryland.

One AP writer who covered the Queen’s visit at the time, wrote: “The supermarket, in its awesome majesty, is a growing symbol of American abundance.”

The Terrapins-Tar Heels game was Queen Elizabeth’s first and last football experience on this side of the Atlantic. Though, in 1991, she sat in on another American sport, a baseball game at Memorial Stadium between the Baltimore Orioles and the Oakland A’s. She left after the 2nd inning.

On the sporting stage, the British monarchy has traditionally embraced more polished recreations such as tennis, polo, horse racing, and dressage.

Members of the royal family have even competed in open tournaments. Princess Anne, the only daughter of the late royal couple, was an accomplished equestrian who rode at the 1976 Olympics in Montreal.

Anne’s daughter, Zara Tindall, took her riding skills to the podium when she won silver at the 2012 Games in London.

But it was Queen Elizabeth, the bedrock of the British monarchy for 70 years, who won over the Americans early on. And why not with the help of a college football game.