“I am the straw that stirs the drink!” 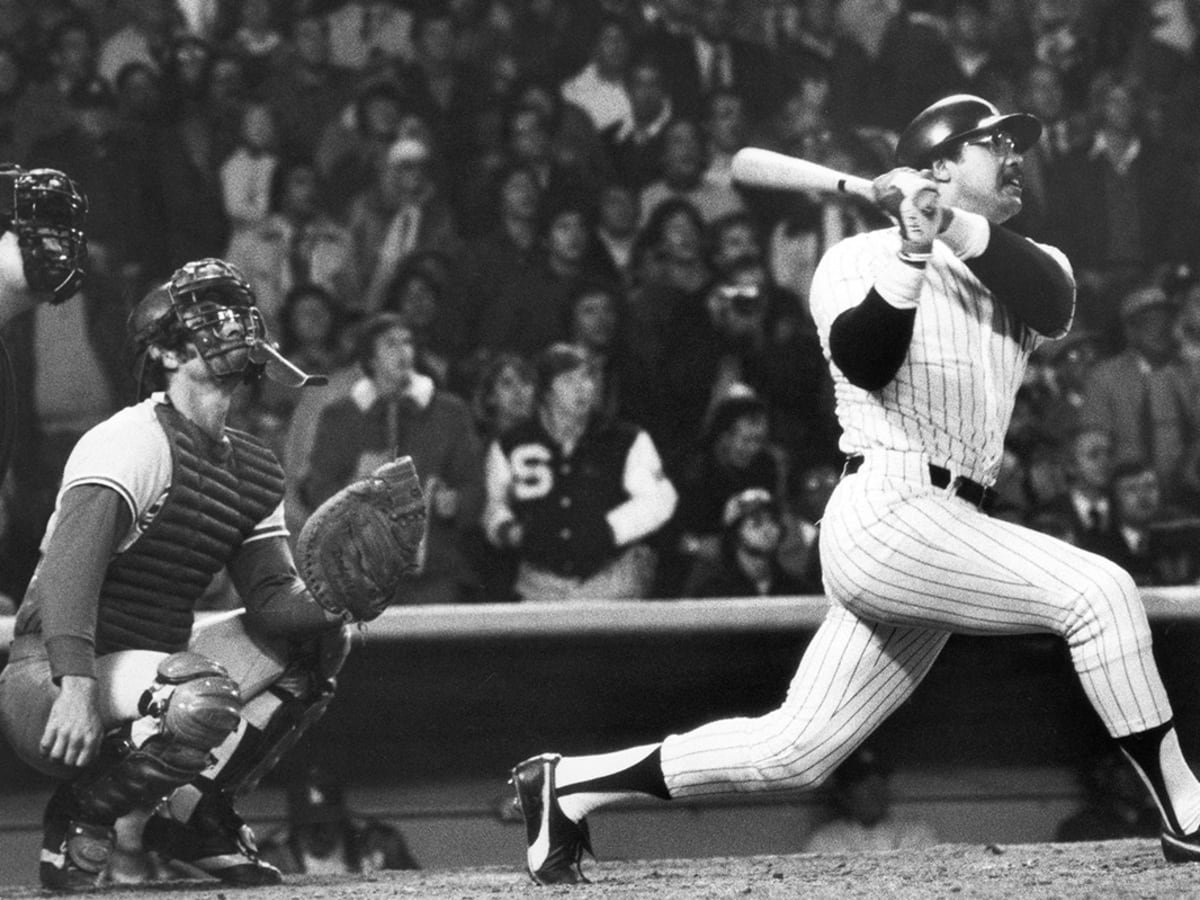 Forty-five years ago, Reggie Jackson knocked 3 home runs in the 6th game of the World Series against the Los Angeles Dodgers, catapulting the storied New York Yankees to their first title in 15 years.

In a kaleidoscopic summer that saw the Big Apple beset by the ‘Son of Sam’ murders, a power blackout and a fiscal crisis, the Yankee slugger lit up the Bronx with all the hopes and dreams of a city in despair.

Jackson joined the pin-striped Yanks in 1977 after spending 9 years with the Oakland Athletics where he built his reputation as a post-season clutch batter. A four-sport varsity athlete in high school, he grew up north of Philadelphia before heading off to Arizona State on a football scholarship.

Still wearing his football gear one day after practice, he ‘wowed’ the baseball coach on a casual try-out by hitting 3 home runs on 5 swings at the plate. The talented bat handler switched permanently to baseball after his freshman year and ended up joining the Kansas City Athletics following his sophomore year.

Jackson was one of the young players that owner Charles Finley carried off to Oakland when the team moved in 1968. An offensive producer with a restive disposition, the left-handed thrower and batter ended up tangling with Finley over his salary in 1969 after manufacturing 47 home runs, 118 RBI, 123 runs, and a .608 slugging percentage.

Do you shop on Amazon? Support us at SPORTS HISTORY WEEKLY by clicking here for ANY of your personal or household purchases

He also sparred verbally with Dick Williams over his dictatorial management style and engaged in a brawl with fellow teammate Billy North during a game at Tiger Stadium in 1974. Despite the overall dysfunctional relationships inside the A’s clubhouse, the team won three consecutive national championships in 1972, 1973 and 1974.

Jackson emerged from the 1973 season as the American League MVP and followed up with a World Series MVP in a hard-fought seven game series against the Mets. His two-run blast in the decisive match helped seal a final victory.

The club-swinging star was traded to the Baltimore Orioles in 1976 but then inked a 5-year, $3 million deal with the New York Yankees, becoming the highest paid player in Major League Baseball.

Owner George Steinbrenner bought the struggling Yankees from CBS three years earlier and a series title still eluded him. After losing the Fall Classic to the Cincinnati Reds in 1976, the autocratic baseball executive picked up the West Coast slugger to bolster his roster.

Upon arrival, Jackson sought out the same #9 uniform he wore with the A’s and the Orioles, but it already belonged to 3rd baseman, Graig Nettles. After learning that all-time home run leader Hank Aaron just retired from the Milwaukee Brewers, he settled for Aaron’s #44.

Similar to his tenure in Oakland, Jackson’s five seasons in New York was fraught with ego clashes and team friction, highlighted by back-to-back championships in 1977 and 1978. During the 1977 World Series against the Los Angeles Dodgers, it was Thurman Munson, Yankees catcher and captain, who gave Jackson his nickname, ‘Mr. October’, in an off-the-cuff remark to a reporter.

Munson, who was killed in a plane crash 2 years later, became a hot topic between Jackson and writer Robert Ward who quoted Jackson in a June, 1977 issue of Sport magazine as saying:

Jackson refuted Ward’s claim, arguing that Ward was trying to feed him that line when the two met at a Fort Lauderdale bar during Spring training in 1977. In his autobiography written with Kevin Baker, ‘Reggie Jackson: Becoming Mr. October’, Jackson noted that he would never disparage the team’s captain who also happened to be the person that urged Steinbrenner to sign him up from free agency.

Still, the quote stuck with him and only added to the strain in the Bronx dugout. On September 8th, 2003, Steve Serby at the New York Post wrote a flashback column on Jackson, which opened with: “He wasn’t merely The Straw That Stirred The Drink. He was The Straw That Made The Drink Stir-Crazy, too.”

Do you shop on Amazon? Support us at SPORTS HSTORY WEEKLY by clicking here for ANY of your personal or household purchases

The Yankees closed out the 1977 season with a 100-62 record, beating out the Orioles to defend their AL East title. At the pennant race, they took on Kansas City and traded leads until finally securing the 5th game for a trip to the World Series. But the Jackson ‘magic’ didn’t start until the team faced Los Angeles for the national championship.

The batting virtuoso ended up driving 5 home runs in the 1977 Series, three of which came in the Game 6 clincher. He became the first player to hit three balls out of the park in a single World Series game since Babe Ruth achieved the feat in 1928 (and 1926).

Jackson’s performance at the plate in that final match electrified the stadium to such a degree that he was forced to dodge a mob of fans that stormed the field at the close of the game.

Reminiscent of a linebacker charging with a football in hand, the former gridiron athlete rushed through the chaos towards the locker room, knocking fans in his path while holding his helmet in his left hand and his baseball glove in his right.

Facing the Dodgers again at the 1978 Fall Classic, Jackson ripped 3 homers, 2 of which were delivered in the decisive match. That year, the Yankees repeated the same 4-2 winning score over their West Coast rivals.

Leaving New York in 1981, Jackson signed up with the California Angels for a 5-year stint, followed by a season in Oakland before hanging up his glove and putting his bat to rest. He was inducted into the Baseball Hall of Fame in 1993.

Meanwhile, Bronx baseball entered a lost decade with fans directing their ire against Steinbrenner, who years later admitted that letting Jackson go was one of his biggest mistakes.