The Rise & Fall of Rollerblading

An explosive sport collapses into a generational fad 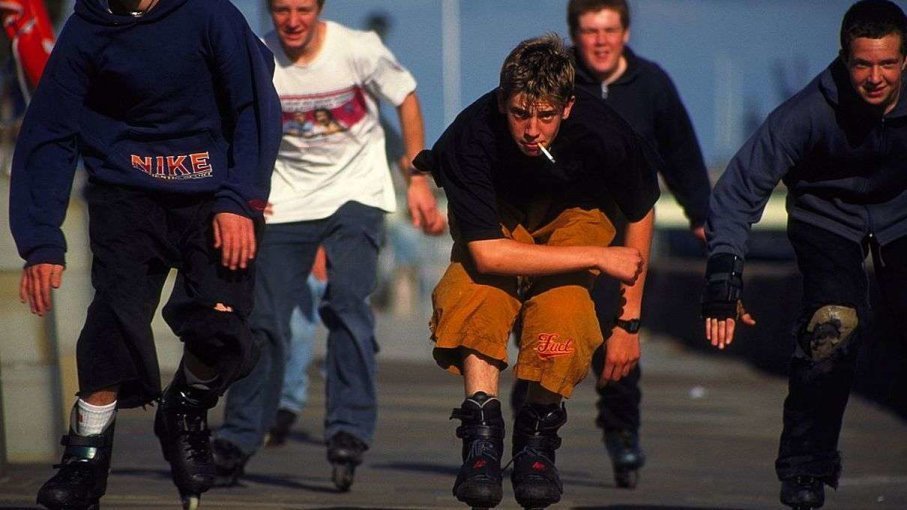 Inline skating, the fastest growing sport in America during the 1990s, turned out to be a generational fad. Instead of latching on to the next generation, it retreated into a niche for elite athletes.
Posted Sunday, August 21, 2022 8:00 am

Thirty years ago, America was enamored with a new outdoor activity that was quickly becoming the fastest growing sport in the country. Other than demanding two balanced feet and a fun-loving spirit, inline skating had no age limit or gender preference.

On any given day in the 1990s, millions of Americans strapped on their wheeled boots and took to the streets, the parks, and any other place they could find with a smooth pavement.

However, what seemed to be the beginning of an enduring sport ended up falling flat on its feet. Inline skating turned out to be a generational fad, a short-lived novelty in the grand history of non-traditional sports.

At the turn of the new millennium, 22 million Americans rolled on these rigid contraptions at least once a year. By 2017, that figure dropped to 5 million.

Inline skating ended up retreating into its own niche, remaining a training tool for serious athletes or going underground for edgy daredevils.

The single-line wheeled shoes originated in Europe and got their first patent in Paris in 1819. But they stayed as crude toys and were overtaken by the more popular ‘quad’ roller skates that were developed by American James Plimpton during the Civil War.

A staple of teen-age life for much of the 20th century, roller skates were easier to control and were enjoyed in all forms of recreation, from roller derbies to disco skating.

The inline versions remained outside the zone of mass popularity until two Midwest brothers rejiggered the design for greater comfort and maneuverability.

Rollerblading, the eponym for inline skating, was named after its successful branding company, Rollerblade, Inc. The latter was founded in 1982 by Minnesotans Scott and Brennan Olson, hockey players who were looking for ways to practice their sport in the summer.

At the time, hockey was primarily a winter discipline and few ice arenas were operating in the off-season. The Olsons retrofitted their hockey boots with polyurethane wheels in a straight line and sold the idea to their hockey friends.

Stores were already carrying the booted inline skates before the Olsons arrived, but sales to the public were always flat. Being entrepreneurs as much as they were athletes, the Olsons sourced the wheeled tracks from a California manufacturer and pitched them as accessories, offering 5-day, money-back guarantees to skeptical buyers.

The strategy worked and with time, their town was buzzing with hockey enthusiasts wearing inline skates.

The new toy only transcended the hockey world when Rollerblade decided to launch a marketing campaign aimed at women and children. The skates were painted neon colors and given to rental shops on popular California beaches.

The company also sponsored skating runs between towns, including one road warrior who skated the distance from Denver, Colorado to Minneapolis, Minnesota.

Almost overnight, families were wobbling on wheels along Portland’s waterfront park and fearless street slickers were weaving through traffic in New York City.

Basketball on rollerblades, tennis on roller blades, and a multitude of other wheeled sideshows started appearing. Vying for outdoor physical space with cyclists, joggers and walkers, bladers got the ire from fitness traditionalists but the new sports phenom was unstoppable.

Aggressive inline skating, which incorporated the execution of tricks in mid-action, found new homes on concrete stairs and brass railings. In popular culture, the opening scene of the 1995 Mighty Morphin’ Power Rangers movie featured the Rangers hitting the streets on their inline skates to the hip tune of 'Free Ride'.

The same year that the Power Rangers film was released, inline skating made it to ESPN’s newly-created X Games, an extreme sports tournament that lined up skateboarding, bungee jumping, mountain biking, sky surfing, and street luging.

Drawing 200,000 spectators and costing $10 million to host, the “Extreme Games” were a commercial success and served to enhance the visibility and legitimacy of skating on eight wheels.

For the next few years, there were more inline skating events at the X Games than skateboard or bicycle competitions. Inline hit its peak at the youth-oriented tournaments in 1998 with 4 categories: vert, vert triplets, street, and downhill.

On the business front, Rollerblade, Inc.’s revenues doubled after it started pursuing the leisure market, with California representing 1/4 of total sales and women representing 1/3 of all buyers.

Due to its successful strategy, the company was an early leader in the space and by 1995, it had 40% of the $650 million inline business in America.

But competition was heating up and even Nike got into the action, acquiring the world’s leading hockey equipment maker, Bauer, with an eye towards developing a following for hockey on concrete.

At that point, Rollerblade, after having gone through several owners, fell into the hands of Nordica, today a division of Italy-based Tecnica Group.

But something happened as the century turned. Millennials grew up, the industry matured, and the consumer psyche shifted. Parents also never got over the injury perceptions associated with rollerblading and a new generation of kids were now pursuing other athletic programs such as soccer and lacrosse.

The sport’s death knell arrived in 2005 when the X Games discontinued inline skating events altogether. Sales were slipping, sponsorships were abandoned, and even Nike sold Bauer at an estimated $195 million loss from its original purchase price.

In the world of extreme sports, rollerblading also lost its cache to rivals skateboarding and snowboarding, both of which broke into the Olympics.

While a growing market around elite athletes spawned the development of new high-end skates, the mass popularity of inline skating that defined the 1990s had all but retreated to the margins.