Winning regattas and designing sails for his own competitors 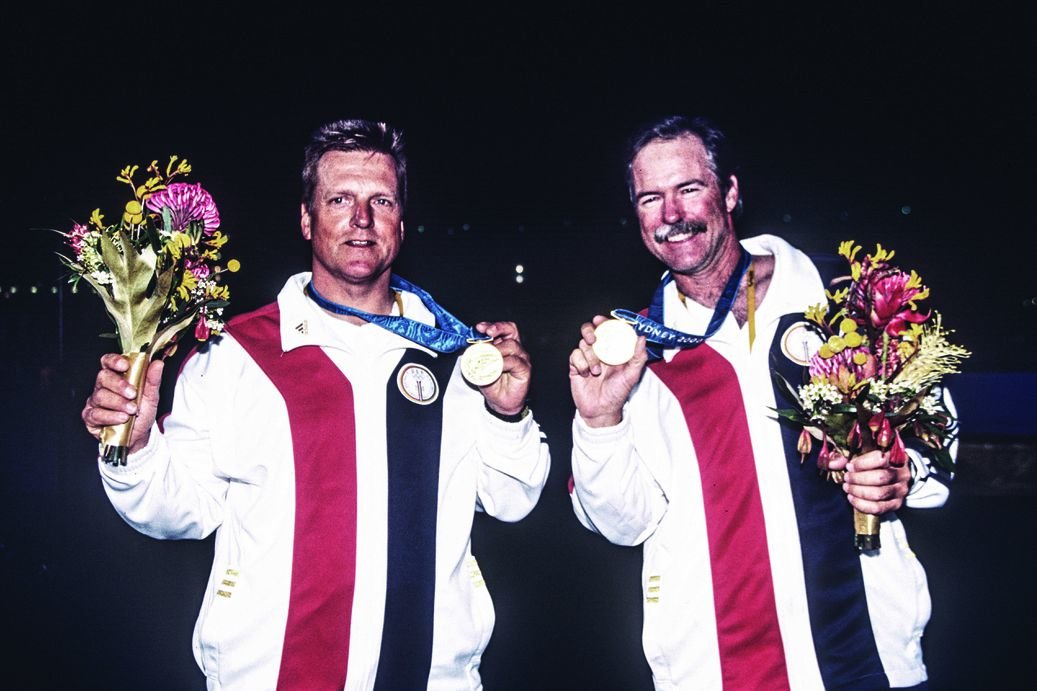 Mark Reynolds (right) and his partner Magnus Liljedahl displaying their gold medal after winning the Star class regatta at the 2000 Sydney Olympics.
Posted Sunday, August 1, 2021 8:00 am

For Mark Reynolds, the ‘Stars’ have always been aligned. From a young age, the San Diego native was surrounded by sailing luminaries, soaking up invaluable tips that were as much about losing, as they were about winning.

One of the leading racers of his day, Reynolds racked up an impressive collection of water-borne accolades that included 2 gold medals at the Olympics, 8 medals at the World Championships, 10 victories at the Continental Star Championships, and 7 wins at the Bacardi Cup, one of the world’s oldest and most traditional sailing events.

Inducted into the National Sailing Hall of Fame in  2012, Reynolds also went on to run his own business making sails, which were mostly used by his Star class competitors. Sports History Magazine asked the life-long yachtsman to share his decades of experience on the water.

Your father was a sailor. Tell us a little how he influenced you at a young age.

As an infant, I was on sailboats and even had a sandbox that was in a boat. I got my first Sabot for Christmas when I was 8. My dad crewed for some of the greatest Star sailors and for most of my childhood, crewed for Malin Burnham. Then in 1970, when I was 14, he started crewing for Dennis Conner.

What I learned from just being around these great sailors and continually asking questions is no doubt the reason I was able to follow in their footsteps and excel in sailing. My dad provided me with a sabot, but taught me how to maintain it and encouraged me to earn money to buy new sails and rigging. He also taught me how to be a good loser, which is something I had trouble with as a kid. I was able to channel that into just working harder so as not to lose anymore!

You went to San Diego State University. How was the college sailing scene back then?

At our school it was pretty loose, but on the east coast and nationally I think it was too structured! At SDSU we were a “club” sport, so funding was minimal. But we had a great sailing center to sail from and good sailors gravitated to the school, primarily local kids. We did one intersectional per year and the nationals twice and depended on financial help from the local sailing community, so we were as immersed in college sailing as the eastern schools.

At SDSU we were focused at the time on the dinghy but did a bit of keelboat and singlehanded. What I really enjoyed with college sailing was the camaraderie. In fact, I met my wife on the sailing team and we’re still married after over 40 years. At the same time, I was pretty focused on the Laser and then the Snipe outside of school. I also started working for Dennis on his boats, including going to the 1976 Olympic trials and Olympics with him.

You worked for Dennis Conner for 10 years. What did you learn most from him?

The primary thing was to be better prepared than your competitors. It was no accident that his book was called ‘No Excuse to Lose’. It gave me more confidence and when it was obvious to my competitors that my boat was better prepared, I think it gave me a psychological advantage on the water.

Working on Dennis’ boats I learned how to make a boat work better and go faster. Dennis isn’t known for being the most open competitor. As a kid, he would often answer my questions with “does Macy’s tell Gimbels?”. But in the end, I learned so much. I also worked for Dennis at his drapery business, which no doubt helped me when I went into business.

You were World Champion twice and also won gold at the 1992 and 2000 Olympics. What were your most memorable moments?

Number one, I would have to say standing on the Olympic podium while the national anthem was played. Both Sydney and Barcelona were fantastic hosts and unlike most Olympics, the sailing was front and center. The other two Olympics I participated in we didn’t even stay at the Olympic village due to it being in completely different cities.

Winning my first Star World Championships was very special, since my dad was also a Star World champ and I had come close so many times. In fact, I finally won on my 14th try.

Fundamentally, what does it take to become a winning racer on the water?

Number one would be commitment. I was laser focused for my whole career on winning and doing whatever it took in the way of preparation. No doubt, part of this was learned from being around Dennis Conner. But I just always had a strong desire to win and maybe even more importantly, I just hated to lose. Losing drove me to work even harder.

From your experience, what is the most challenging class of boats to race?

That’s pretty hard to nail down. Some boats are more challenging just to handle. The FD was one of those boats for me with the trapeze, spinnaker and high speeds. Today’s example would be the foiling boats. I really enjoyed the combination of the tactical aspect of sailing and tuning the boat to go faster, and the Star boat really provided that combination for me.

How is the sport different today from 30 years ago?

It is quite a bit different. When I started there was no professional sailing. In fact, if you were paid at that time you’d be banned not only from the Olympics but from all sailboat racing. That started to ease up in the early 90s. As a result, when I started, all my serious competitors were sailmakers. It was a job that allowed you to make a living and sail as much as possible.

Today, the Olympic sailors are much more athletic and you need to spend time sailing and in the gym. There’s no time for having a job. When I was doing Olympic sailing, the financial support from the US was minimal, usually about $5,000/year plus boat shipping. That was not the case in most other countries and the US started changing in the late 90s.

How did you get involved in sail-making?

As I mentioned, to be a competitive sailor when I started you either needed to have family money, or be a sailmaker. Fortunately for me, I really enjoyed building things. I built my Sabot in my teens and so making sails was a natural move. Also, when I was a kid, we had 2 sailmakers right next to our club and one was the original North Sails loft and run by Lowell North.

I spent a lot of time there learning about sails and sailing from all the great sailors that worked there at the time. The only thing that has changed in the process of making small boat sails since then is we now use XY potters to draw and cut sails rather than mylar patterns.

What advice would you give young sailing enthusiasts who want to make it professionally?

My advice would be to focus on being the best you can in a boat like the Optimist where tactics are so important. That’s probably the hardest part of sailing to learn and then later branch out in the area of yachting that fits you best whether it’s the tactical, boat handling or technical aspects of the sport.

For me, not letting the lure of professional sailing pull me away from my goals of winning the Star Worlds and Olympics in the end made me much more valuable as a pro sailor later on.