Scott Hamilton, The Olympian Who Beat the Odds

A cancer survivor tops the podium 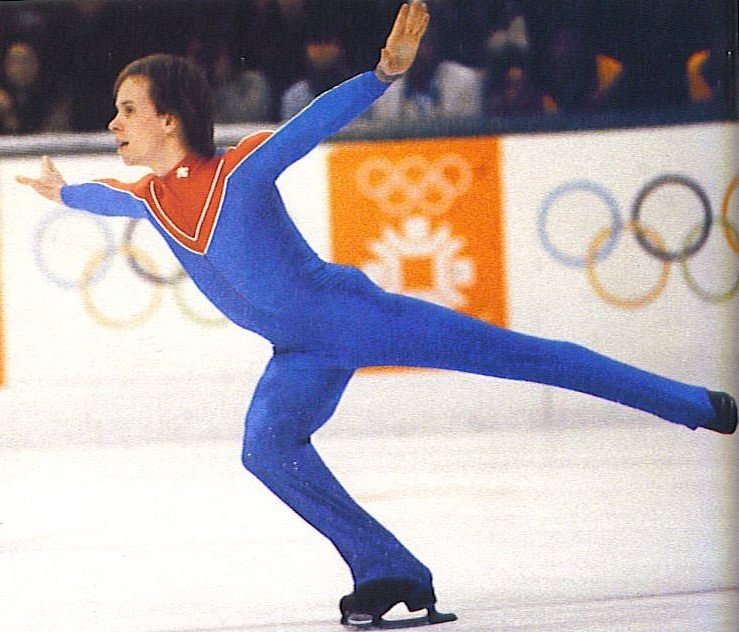 Scott Hamilton performing at the 1984 Winter Olympics in Sarajevo where he became the first American male figure skater to win gold after a 24-year drought.
Posted Sunday, December 25, 2022 8:00 am

His triumph at the Winter Olympics in Sarajevo was the culmination of a skating career that saw 4 consecutive wins at the U.S. and World Championships from 1981-1984.

Hamilton went on to pursue professional entertainment, first with ‘Ice Capades’ and then with his own successful troupe, ‘Stars on Ice’. For years, he dazzled the world with his fast and fancy footwork and his signature backflip that few skaters could replicate.

BUY- 'The Great 8: How to be Happy Even When You Have Every Reason to be Miserable' by Scott Hamilton

The skating maestro became a TV commentator and a celebrity, and was voted one of America’s most popular sports figures, ahead of star-studded names such as Michael Jordan, Joe Montana, Wayne Gretzky, and Nolan Ryan.

Despite his talents, the road to the top was anything but a smooth glide. A cancer survivor in both his childhood and adult years, Hamilton overcame tremendous adversities in life to achieve the near-unachievable.

Sports History Magazine spoke with Scott about his skating years and his positive attitude in life that inspired millions of people around the world.

You were raised in Bowling Green, Ohio by parents who were both teachers. How did figure skating come into your life?

Between the ages of 4 and 8, I was a sick child and doctors couldn’t identify my illness. So, they told my parents that I should just take advantage of whatever I could do to enjoy my childhood.

They enrolled me in Saturday morning ice skating classes and as it turned out, the more I skated, the more my health improved and the better I felt.

Did you have any figure skating heroes growing up as a kid?

When I was 9 years old, I saw the ‘Ice Capades’ show at the Boston Garden with Freddie Trinkler as the comedic ice skater. I enjoyed him so much that right there I knew that’s what I wanted to do, perform on ice in front of audiences. Later on, Freddie and I also became friends.

How did your skating develop until the period when you started winning gold medals?

Early on, I actually wasn’t very competitive. I coasted, showed up late for sessions, and didn’t have a strong work ethic. When my mother was diagnosed with cancer in 1978, I decided to honor her with the best of my abilities on the ice.

Do you shop on Amazon? Support us at SPORTS HISTORY WEEKLY by clicking and surfing for ANY of your personal and household needs

Your string of four consecutive victories at the U.S. and the World Championships between 1981 and 1984 was remarkable. What do you attribute that success to?

I was lucky in some ways because in 1980 three major figure skaters retired: Robin Cousins, John Curry and Jan Hoffman. They were all medal champions at the Worlds and the Olympics and suddenly there was a void at the top.

Everything flipped and guys who used to place 7th in the past were now placing 1st and 2nd. Still, because of the opportunity, I felt a lot of pressure to deliver.

Did you have a coach who made a particular difference in your skating years?

I was coached by Carlo Fassi, the same person who trained Peggy Fleming and Dorothy Hamill. But then he and I parted ways around 1980 and I started working with Don Laws and we stayed together until the end.

BUY- 'One Jump at a Time: My Story' by Nathan Chen

Don was an amazing guy. He was steady, classy and smart. He was a great motivator who cleaned up my weaknesses and made me a ‘complete’ skater.

You reached your amateur peak with a gold medal at the 1984 Winter Olympics in Sarajevo. What was going through your mind heading into the event?

I trained very hard, spending at least 3½ hours on the ice daily, running the long program in the morning and then the short program later in the evening, and constantly simulating competitions.

We flew to Paris to adjust to the time zone before heading to Sarajevo. In Paris, I saw one of the leading competitors practicing and I got a boost of confidence knowing that I could beat him.

When the moment came in Sarajevo, I had my strategy set and I knew that if I placed in the top three of each of the aspects then I couldn’t lose. I ended up coming in 1st at the compulsory figures, 2nd in the short program, and 2nd in the long program.

After 1984 you decided to retire from amateur skating. Was it the right time to exit?

Yes, I was already 25 and I was broke. We weren’t making money as amateurs and spending more years for another gold medal didn’t interest me.

You joined ‘Ice Capades’ and then went on to co-found ‘Stars on Ice’. Tell us about those experiences?

Ice Capades was a great experience. I learned a lot, built stamina, and developed my work ethic. But it was sold two years after I joined and I was let go because the new owners didn’t need additional male stars.

Then I was fortunate to launch ‘Stars on Ice’, which exploded especially after Kristi Yamaguchi came on board in 1992. I set the tone for the programs, produced the shows, and we did very well. We toured for 15 years and my last performance was in 2004.

In your career, did you see yourself more as an entertainer than an athlete?

Yes. My heroes were always entertainers, not skaters. I admired musicians especially like Neil Diamond, Robert Plant from Led Zeppelin and Bruce Springsteen. They kept creating new styles and never failed to deliver great music. They had long careers and always seemed to be appreciating assets.

Do you shop on Amazon? Support us at SPORTS HISTORY WEEKLY by clicking here and surfing for ANY of your personal or household needs

Your battle against cancer began in the late 1990s and you managed to overcome tremendous adversity. Now that you’re involved in charity organizations, what do you tell people about staying positive?

I use skating as an example, that I fell 41,600 times but I always managed to get up. And that’s what it’s all about. Failure is part of everyday life but we need to stay mentally and physically tough.

I remind people that if it weren’t for my childhood illness, then I wouldn’t have become the skater that I was. I also mention that God is real and that prayers in my life have helped me a lot.

How is the sport of figure skating different today from when you were competing in the 1980s?

The biggest difference is the amateur to professional transition. Today, figure skaters are professional and they can just hang up their skates when they’re done.

We didn’t retire as competitors. We became professional ice entertainers with live shows that brought out fans and garnered high television ratings.

Our performances were creative, exciting, and the marquee grew with every year. All that started to decline after 2002 in a perfect storm following 9/11 and the 2002 scoring scandal at the Winter Olympics.

BUY- 'A Skating Life: My Story' by Dorothy Hamill

Where do you see figure skating going in the future?

That depends on who is winning and what they want to do with the sport. Somebody like Nathan Chen can keep skating as a pr0ofessional, or pursue an alternative career after his Yale education. The top figure skaters don’t need to go into live entertainment any more as their next thing in life.

(This interview was conducted in the Winter of 2020).