The Olympian Who Survived Munich & the Holocaust

Shaul Ladany, 'King of the Road' 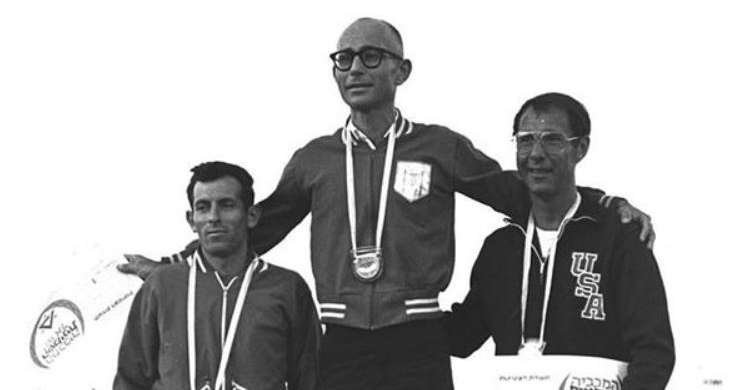 Shaul Ladany (center) receiving his gold medal at the 1969 Maccabiah Games. A survivor of the Holocaust and the Munich Massacre, Ladany was a 2-time Olympian and former world champion in the 100-km racewalking event.
Posted Sunday, September 18, 2022 8:00 am

Shaul Ladany is a walking miracle, literally and figuratively.

The 86-year old Israeli is a 2-time Olympian who survived both the Holocaust and the 1972 Munich massacre. His biography is a riveting tale of life’s random chances mixed with an athlete’s story.

BUY on Amazon- Shaul Ladany's book 'King of the Road'

His athletic accomplishments include five gold medals at the Maccabiah Games, first-place finishes at various races around the world, and the Pierre de Coubertin medal awarded by the International Olympic Committee.

Sports History Weekly spoke with Ladany about his remarkable life and the sport he loves.

You were born in Belgrade, Yugoslavia in 1936 to a Jewish family. At the age of 8, the Nazis deported you to a concentration camp. Tell us about that harrowing experience and how you survived.

After the Germans started bombing Belgrade we escaped to Hungary, risking death if we would be caught. But they rounded up the Jews in Hungary and 5 members of my family, including me, were sent to Bergen-Belsen, a concentration camp in northern Germany.

I spent 6 months there and was one of the few lucky prisoners who made it out alive while the war was still going on. There was a ransom deal made by Zionists in Hungary to supply 10,000 trucks to the Germans in exchange for releasing 100,000 Jews.

In the end, no trucks were delivered and only 1,700 Jews were allowed to leave. I was one of them along with my parents and we made our way to Switzerland where we stayed as refugees until the war ended.

When you arrived to Israel in 1948, you were 12 years old. At what point did you get involved in running and walking?

I was 15 years old when I won my first competition, a 10k running race. When I went to officer training school in the Israeli army, I was told that I have exceptional physical abilities.

I ran in Israel’s first marathon, which took place in 1956 and had only 10 runners. I didn’t finish because I didn’t train for it. I then started participating in the Israeli marches and later in the 4-day annual marches in Holland.

In Israel, I ended up doing that march over 50 times and they nicknamed me “King of the Marches”. In Holland, I did it 26 times.

Fundamentally, what makes a racewalking champion?

You need a strong body, both lower and upper. All your muscles and joints are constantly rotating during a race and it takes a long time to develop that stamina.

I did lots of calisthenics and studied the sport by reading Harold Whitlock’s book, “Race Walking”. He was a British walker who won gold in the 50k event at the 1936 Olympics and then published an instructional guide.

I was self-taught in the sport and never had a coach.

In your opinion, who is the greatest racewalker of all time?

In the 50k race, I would say Cristoff Hohne. He was an East German who won gold at the 1968 Olympics in Mexico City by beating everyone else with a wide margin of 10 minutes. He used to walk very clean and proper races and was never disqualified.

The best American racewalker was probably Larry Young. He’s the one who won bronze behind Cristoff in Mexico City.

In the U.S., at least, why do you think racewalking doesn’t get the same attention or respect as the marathon?

The sport lacks money, organization, and publicity. In the late 19th century, racewalking got a lot of attention when it was promoted heavily. At Madison Square Garden in New York City, they had 24-hour walking races with many people watching and betting.

The modern-day marathon was also not popular until they started promoting the New York Marathon. In France and Italy, they do a better job in organizing and publicizing racewalking events.

My time was an excellent finish, which I actually improved a lot from prior competitions. The 50-mile race is also not so common anymore around the world and few people compete in that category compared to the more popular 50k event and of course, the marathon itself.

You competed in the 50k race at the 1968 and 1972 Olympics where you placed 24th and 19th, respectively. With your road achievements already proven, why did you lag so much behind your potential?

In 1968, I had no chance of reaching the podium. The high altitude in Mexico City held me back and I also got stomach sick with “Montezuma’s revenge”.

In Munich, I miscalculated my strategy by expending too much energy in the first 5k and 10k stretches of the race and I paid for it later when I began to slow down.

I didn’t have the on-site coaching to help me pace the race and I was also supposed to hydrate at the 10k mark but I didn’t get my drink until the 15k point.

In hindsight, I should have placed at least 6th if I did the right thing.

At the 1972 Olympics in Munich, you once again escaped from the clutches of death when a group of Palestinian terrorists raided the Village and massacred 11 Israeli athletes. What do you recall from those tragic moments?

Most of the Israeli team stayed in 5 adjacent townhouse units at the Olympic village. Unit #1 housed the coaches, unit #2 housed me with 5 others, unit #3 housed another 6 athletes, unit #4 housed doctors, and unit #5 housed the chief of the delegation.

I completed my race on September 3rd, and September 4th was a day off. In the early hours of September 5th, I was awakened by one of my housemates who told me that coach Moshe Weinberg from unit #1 was just shot and killed.

Only a few hours earlier, Moshe asked me for an alarm clock so the team would be woken up early in the morning. Trying to see what was happening, I opened the front door of my unit for a peek outside and saw a few security guards talking to a man standing outside unit #1.

I didn’t know it at the time, but it was the start of the hostage situation and the man was the terrorist ringleader. He refused to allow Red Cross aid to the wounded.

A female security guard asked him “why should you be inhumane?”, to which I heard him reply something like Jews or Israelis “are not humane either”. At that point, I realized the danger.

I put my training suit over my pajamas and was the last one to slip out from the terrace in the rear. Instead of just escaping, I went around the back to unit #5 to warn the delegation chief.

You competed in many road races around the world. Do you have any favorite locations where you enjoyed the challenge most?

My favorite has always been the 50k held in New Jersey, mostly at Point Pleasant. I walked that competition ten times and in 1976 I won both the Masters (over 40) and the Open in the same event.

As you look back at your walking career, do you think it was an individual’s personal obsession, or was it simply an athlete’s love for a sport?

It was both. I like to say to myself that I love to finish, but not to walk. With the passing years, every kilometer also gets longer and every slope gets steeper.

But I still love the sport and I walked my most recent one in February of this year in Tel Aviv. Racewalking has also allowed me to make many friends from around the world and we see ourselves as members of an exclusive club in a niche sport.

BUY on Amazon- The Munich Massacre

How is racewalking different today compared to 50 years ago in terms of its popularity and evolution?

There is no change in its popularity. But the style has changed in terms of the technique that is used. In 1972, a Polish coach who was training the Mexican team introduced a new technique with quick-stride straightened legs that makes the athletes look like runners instead of walkers.

The rules haven’t changed much, but the resulting outcome is that racers today are clocking faster finishes.

What’s next for you on life’s agenda?

I will continue to walk as long as I can. I joke with my daughter that I would like my tombstone to be inscribed with the line: “He walked and he walked…until he walked away”.

(This article was adapted from our interview with Ladany in July/2020).