Ushering in a new sports nation 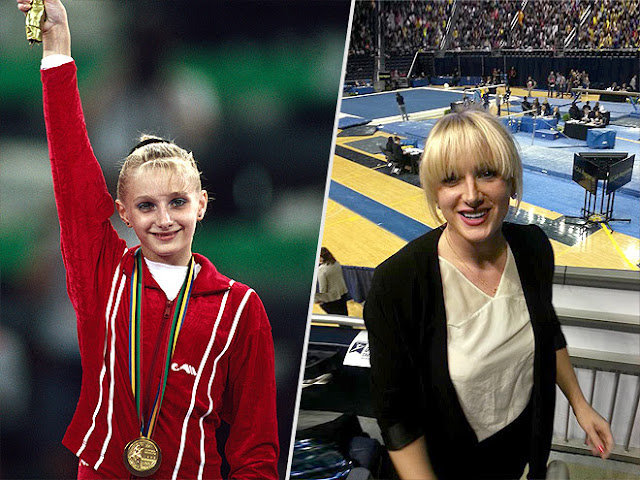 Tatyana Gutsu shown on left when she won Ukraine's first Olympic gold at the 1992 Olympics. On right is a more recent photograph.
Posted Sunday, May 22, 2022 8:00 am

“Today, I am not competing but I’m sharing my knowledge and experience,” says Tatiana Gutsu. Her comment is only fitting, since the former Ukrainian Olympian is set to be inducted into the International Gymnastics Hall of Fame.

One of the last gymnastics prodigies to emerge from the USSR, Gutsu was also the first to bring out the Ukrainian national anthem and the now all-familiar blue and yellow flag when she won gold at the 1992 Olympics.

That was 30 years ago. Now, she runs the Tatyana Gutsu Gymnastics Academy located in Farmington Hills, Michigan. After sending winners to state and regional events, this year she’ll be leading her group to the Xcel Championship Invitationals in Daytona Beach, Florida.

In 1991, Gutsu was a 15-year-old unleashing her talents at the World Championships in Indianapolis, Indiana. As she leaped and tumbled her way to a team victory inside the Hoosier Dome, the USSR back home was cratering at the seams.

It was the last World Championships for the Soviet Union. The old communist empire would break up into its 15 republics, never again to compete as a monolithic bloc.

In addition to team gold, Gutsu nabbed 2 individual silver accolades, one in the Uneven Bars and one in the Balance Beam. Her signature high double layout off the beam earned her the nickname ‘The Painted Bird of Odessa’.

Gutsu was born and raised in Odessa, Ukraine. Reflecting the rich multilayered history of the Black Sea town, her family is of mixed Romanian and Russian heritage.

“Many nations in one,” she is fond of saying.

Noted for her difficult gymnastic routines, Gutsu was sent off at a young age to Moscow’s famed Novogorsk Sports Center to further her training. At age 9, she qualified for the juniors. At 14, she made the national team.

In all areas of public life- political, economic, cultural- Ukraine was an integral part of the USSR and sports were no exception. In Moscow, she mixed and mingled with other gifted athletes who hailed from all corners of the Soviet expanse.

Her contemporary idols were Russian gymnasts Yelena Shushunova and Oksana Omelianchik, both international gold medalists. “Watching them perform gave me a drive,” she remembers.

Ukraine had a tradition of feeding the Big Red Sports Machine with elite athletes. At the time, successful sportswomen and men were a privileged class, nurtured by an ideological regime that viewed them as symbols of the glories of communism.

Polina Astakhova, born in Zaporizhzhia, Ukraine, represented the USSR at the height of the cold war. A lightning rod of grace and balance on the Uneven Bars and Floor Exercise, she won 10 medals (5 gold) at the 1956, 1960 and 1964 Olympics.

Before her, Ukrainian natives Nina Bocharova and Viktor Chukarin were the most decorated Soviet gymnasts at the 1952 Games in Helsinki, the first ever for the USSR.

In the 1980s it was Sergei Bubka, the celebrated pole vaulter who broke the 6-meter hurdle and was twice named ‘Athlete of the Year’ by Track & Field News. Since 2005, Bubka has served as President of the National Olympic Committee of Ukraine.

Gutsu was among the last to come out of the Soviet Union’s fabled gymnastics program. A year after Indianapolis, she competed with the Unified Team, the name used for the former USSR representation, becoming the most dynamic performer in her discipline.

At the 1992 Olympics in Barcelona, ‘The Painted Bird of Odessa’ came away with 2 premier accolades, Team and individual All-Around, plus a silver in the Uneven Bars, and a bronze in the Floor Exercise.

She nearly missed the All-Around competition after falling from the balance beam in the preliminaries. Her fumble came off one of the most difficult mounts- a roundoff to the springboard with a backward flip onto the beam.

The error dropped her to 4th place in the Unified Team. But since only 3 contestants could compete in the finals, Gutsu was now shut out from the All-Around contest, the most coveted prize in gymnastics.

However, team officials believed that her prospects of winning gold were higher than those of 3rd place Rozalia Galyeva whom they claimed ‘developed’ a sore knee during practice. The decision to replace Galyeva was a controversial one that would linger after Barcelona.

Nevertheless, Gutsu delivered a storybook finish. Running neck and neck with Shannon Miller of the U.S., her total score of 39.737 was just .012 ahead of the American, enough to place her at center podium with a bouquet of flowers in hand.

What came next was an historic moment in the sports annals of a nation. Instead of the old Soviet tunes, officials played the Ukrainian anthem and raised the blue-and-yellow national flag.

“It was a very proud moment to bring out the Ukrainian national anthem and flag,” she recalls.

Despite officially competing as a member of the Unified Team, Gutsu’s individual gold medal was the first for Ukraine as an independent country. Two more followed for the women’s when Tatyana Lysenko took the Balance Beam and Alexandra Timoshenko won the Rhythmic Gymnastics.

After Barcelona, Gutsu left her home amid the chaos that ensued with the dissolution of the Soviet Union. She made her way to the U.S. where she took part in gymnastics camps, clinics and exhibitions. In 2001, she flirted with an Olympic comeback but then decided against it.

She eventually settled in Michigan where she opened her academy in 2016 and where she lives today with her fiancé and 13-year-old son.

These days, besides keeping busy with her students, Gutsu is involved in sending humanitarian aid to the elderly and disadvantaged in war-ravaged Ukraine.

“I am devastated and heart-broken,” she says of the conflict raging in her childhood home. She still has family in Odessa, some of whom are serving in Ukraine’s armed forces.

Allied in sports for much of the 20th century, it’s difficult to imagine the senseless devastation wrought by a former ‘big-brother’ onto its smaller neighbor. No doubt, some of those emotions will course through when Gutsu is enshrined next month at the International Gymnastics Hall of Fame.