A Walk Through Aussie Open History

The Australian Open, played in January each year, is one of the four Grand Slams of the calendar year. This tag has been used for the major events ever since Jack Crawford

A Walk Through Aussie Open History 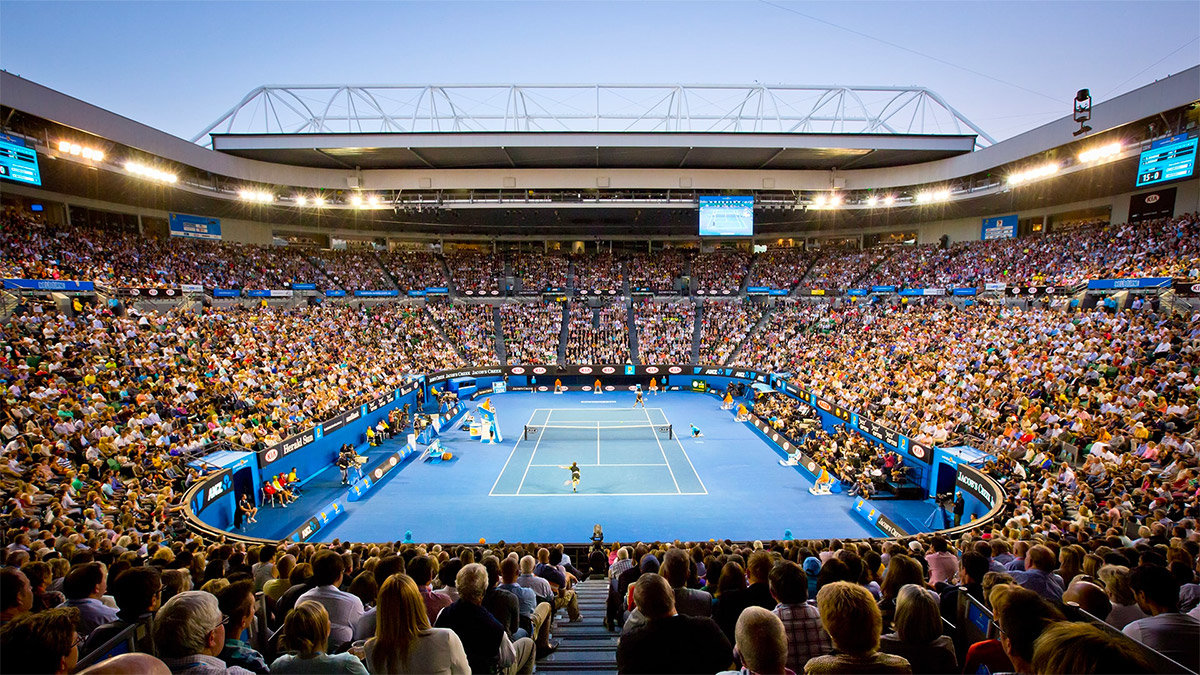 Opened in 1988, the Rod Laver Arena in Melbourne, Australia was the first major tennis facility to have a retractable roof. The new tennis center helped catapult the Australian Open to premier status.
Posted Sunday, January 16, 2022 8:00 am
By Richard Naughton, tennis historian

The Australian Open, played in January each year, is one of the four Grand Slams of the calendar year. This tag has been used for the major events ever since Jack Crawford had a chance to win all four tournaments back in 1933. Crawford crumbled at the final hurdle just like Novak Djokovic came unraveled in 2021.

The tennis competition “Down Under” debuted in 1905 as the Australasian Championships in what was a major year for “Australasian” tennis, as a joint Australia-New Zealand team had reached the Davis Cup final round. The combined team lost that match to the United States before the Americans proceeded to the Challenge Round against Great Britain.

The first four nations to win the Davis Cup- U.S., Great Britain, Australia, France- came to host the prestigious Grand Slam events. Notably, there was no other country that won the Davis Cup until 1974.

The inaugural event in 1905 was played at the Warehouseman’s ground in Albert Park, on St Kilda Road in Melbourne. Little known now, this ground was the site of exciting Davis Cup encounters between Australia and the United States and Great Britain in 1908 and 1912, occasions that did much to build the spirit of tennis in Australia.

The early star of Australian tennis was Norman Brookes. He played alongside his New Zealand counterpart, Anthony Wilding, when both overran the Americans, Wright and Behr.

Brookes claimed the 1911 Australasian Championships and was twice a winner at Wimbledon. A successful businessman after his sporting career, he took on the main administrative role of the LTAA, Australia’s leading tennis organization.

By 1925, there was a modern grass court stadium built in Sydney- White City stadium. Then, in 1927, the first Australian Championships were played at the Kooyong Stadium in Melbourne. The latter boasted a concrete structure similar to the horseshoe arena at Forest Hills, New York.

As President of the LTAA, Brookes was determined to build a legion of stars with the tenacity and skills to win back the Davis Cup. He invited teams of players from France, England, and the United States to visit Australia during the late 1920s and early 1930s to sharpen the skills of Australian players such as Jack Crawford, Vivian McGrath, and Adrian Quist.

By this time, the women were also participating at the Australian Championships. In fact, 2022 marks a century of the ladies competing in the tournament with Mall Molesworth being the first winner.

The 1950s and 1960s saw a complete domination of the Davis Cup and the Australian Championships by homegrown talent. The men- Sedgman, Hoad, Rosewall, Cooper, Fraser, Laver, Emerson, Newcombe and Roche- were the best players in the world. Critics writing many years afterwards questioned whether the drawsheet for some of the years in that period was as difficult in Paris and New York.

The first Australian “Open” took place in Brisbane in 1969. It was the year that Rod Laver embarked on his Grand Slam antics, and he beat fellow Australian Tony Roche 7-5, 22-20, 9-11, 1-6, 6-3 in a semi-final encounter, and one of the longest matches in tournament history. Very few spectators watched on as the match was played in searing Brisbane heat.

Though, by the 1970s, Australian officials had become complacent and failed to take steps to improve the tournaments and ensure they maintained their premier status. Certainly, by the mid-70s, the top racquet swingers often did not travel to Australia and the event fell behind global standards in terms of its field and relative prize-money.

In addition, the games were held immediately following Christmas and this added to the players’ reluctance to make the long journey. From 1972, the event took place at Kooyong stadium, by now antiquated and uncomfortable. The Aussie competition was now regarded as the “least grand of the Grand Slams.”

By the end of the decade, steps had been taken to revamp the other major events and this placed additional pressure on the Australian Open and the LTAA, now Tennis Australia, to improve conditions at home.

Finally, the Australian organization realized that an entirely new facility was necessary to house the Open, and the playing surface should not be grass. All this change, a location shift for the event and building of a new tennis complex, was able to be achieved through Tennis Australia working in conjunction with the State Government of Victoria.

What was unexpected perhaps was just how innovative the changes proved to be. When the first Australian Open was played at Flinders Park (now Melbourne Park) in 1988, the world saw the Rod Laver Arena with a retractable opening roof and the impressive new tennis center that was built for the future and within walking distance of the city of Melbourne.

In many ways, it placed Paris, London, and New York in the shade.

For Australians, tennis in January is part of the national psyche. The only disappointing matter is that apart from Pat Cash (1988) and Lleyton Hewitt (2005) who reached the finals, there have been few chances for Australians to claim victory at their new location.

In considering the historical nature of the event itself, it is fair to say that the Australian tournament enjoyed its golden era between the 1930s and the 1960s before losing some luster. However, there is little doubt that its prestige and glamour have returned.

A magnificently-staged event that is beamed to the world, the Open “Down Under” has retained some features that are quintessentially Australian, including the Norman Brookes Challenge Cup, in whose memory the men’s singles title is awarded.