Playing to make history, working to preserve it 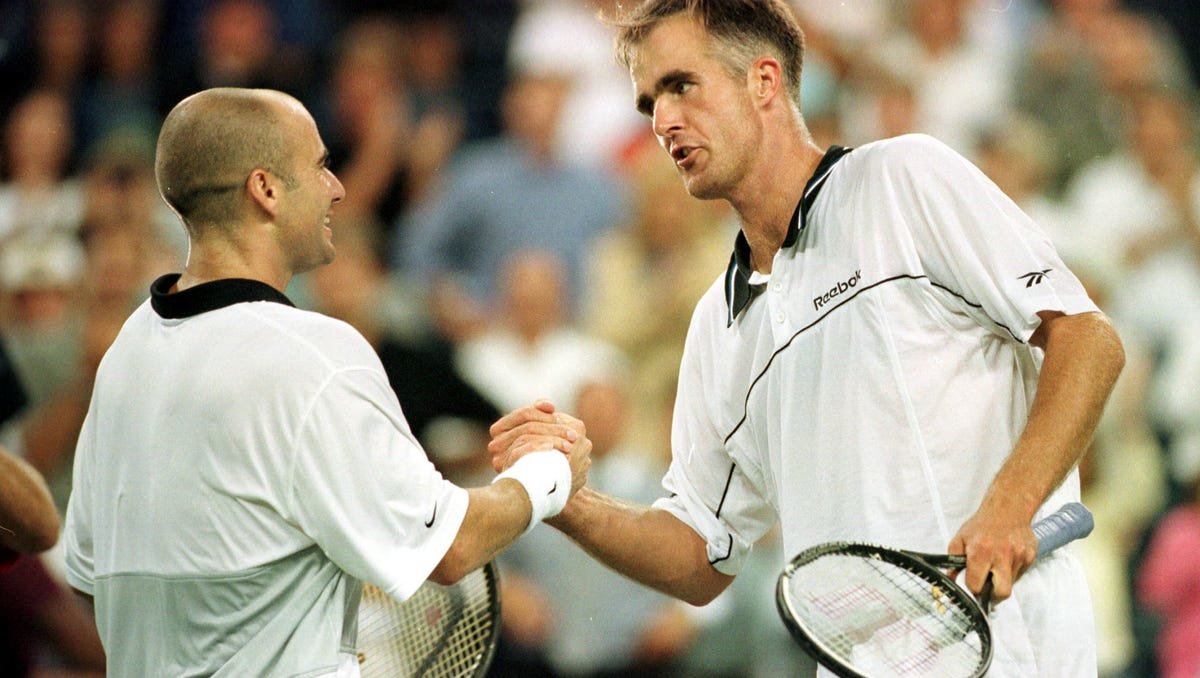 The 1990s was one of America’s most prolific decades in men’s tennis and Todd Martin was part of it. Today, he still contributes to the game’s glory but he does it behind a desk rather than on the court. Martin is the CEO of the International Tennis Hall of Fame in Newport, Rhode Island.

It was the era of Jim Courier, Pete Sampras, Andre Agassi, and Michael Chang, all of whom combined to win more than half the grand slams in tennis between 1991 and 2000. If Martin wasn’t inside the winner’s circle, then he was certainly on the periphery.

“They deserve to be distinguished among themselves”, says Martin in a zoom interview with Sports History Magazine. “For me, I deserve an honorable mention”.

Martin’s humble understatement overlooks a successful 14-year career that saw him become the No. 4 ranked player in the world in 1999.

In between, Martin battled other luminaries such as England’s Tim Henman, Sweden’s Stefan Edberg, and Croatia’s Ivan Ivanisevic. But after reaching the highest levels of competition, he always seemed to fall to his compatriots, which also included MaliVai Washington at the 1996 semifinals and Jim Courier at the 1993 quarterfinals, both at Wimbledon.

Still, Martin was a member of the 1995 U.S. Davis Cup team that defeated the Russians 3-2 to capture one of the most prestigious trophies in all of sports. Paired with Sampras in the only doubles match of the deciding tournament, the duo dispatched Yevgeny Kafelnikov and Andre Olhovskiy 7-5, 6-4, 6-3.

Compared to Sampras’ powerful serves and Agassi’s skillful returns, Martin describes his game as a cross between serve-and-volley and all-court. “I didn’t have Pete’s dominating game”, he recalls. And while he also lacked speed, he did make use of his towering 6’6” height.

Martin’s most memorable game was a match that he actually lost to a close friend, Patrick Rafter. It was at the 1999 Davis Cup in Boston and the mercury was hovering above 100 degrees. Martin felt the onset of a heat stroke, but the rules forbade him from being replaced by another American player.

A doctor squeezed a bag of refrigerated ivy fluid into his system and when he stepped on the court, he came out shivering and wearing a sweat suit. He had won the first 2 sets, 6-4, 7-5, but was then leveled by the Aussie in the 3rd and 4th sets 6-3 and 6-2, before dropping the 5th set 6-4.

Like most career athletes, Martin was a multi-tooled sportsman growing up. His first love was basketball, but the physicality of the game, especially under the net, made him turn to tennis for the purity of its skill and finesse. A native Midwesterner, he enrolled at Northwestern as a freshman and then turned pro after his sophomore year.

“My competitive game was always on grass courts”, he says. Back then, some players who excelled or grew up on a particular surface- grass, clay, or hard- would skip matches knowing they would lose on a different court. Today, the variances between the grounds has narrowed and top competitors are expected to excel on all surface conditions.

He counts three influential figures in his tennis life. The first was his childhood coach and mentor, Rick Ferman, who eventually became CEO of the USTA. The second was Spain’s Jose Higueras, who also coached Courier and Sampras and guided Michael Chang to his win at the 1989 French Open. The third was Dean Goldfine, his traveling coach, motivator, and disciplinarian.

The last American man to claim a grand slam was Andy Roddick who won the US Open in 2003. Asked why the U.S. can’t produce male tennis champions any more, Martin underscores the distinction- “We can, but we don’t.”

He acknowledges there is less interest in the game today than there was 40 years ago, but he also points out that there is an absence of sustainable passion from those who start at a young age. Reflecting on his own experience, “My parents allowed me to find my own passion.“

With a multitude of sports and an endless list of extracurricular activities available to kids today, it’s not a surprise that American men aren’t at the forefront of international tennis. “Passion is what drives excellence”.

Division I colleges still offer a handful of scholarships each year, but then there are financial costs such as travel, lodging, and coaching associated with going pro in a highly competitive global sport.

Martin is hopeful and optimistic about America’s ability to develop championship players. Part of his job as CEO of the International Tennis Hall of Fame is to promote the game and inspire new generations of tennis players, albeit that mission has a global orientation and not just a U.S. focus.

In Newport, he and his staff of 40 (pre-Covid) manage a 20-court tennis club, which was the original home to the U.S. National Championships, the forerunner of today’s US Open at Flushing Meadows in Queens, New York. The first tennis championship took place in 1881.

The Hall of Fame itself is a 12,000 square foot museum that preserves and celebrates the legends of the game and the story of tennis. Exhibits range from the evolution of fashion on the court, to the rich contributions made by women and African-Americans to the sport.

The museum recently acquired 31 tennis-inspired art works from the private collection of the acclaimed Italian tennis writer and journalist, Gianni Clerici. Inducted in 2006, Clerici spent 40 years chronicling the game to legions of fans around the globe.

As keeper of the flame, Martin stays in touch with his former foes on the court. While Courier, Sampras, Agassi and Chang have all been enshrined at the Hall of Fame, it’s Martin now who is making the greatest contribution to tennis.