Mickelson at 50, But Watson Almost at 59

A bogey on the 18th denies Watson a fairy tale upset 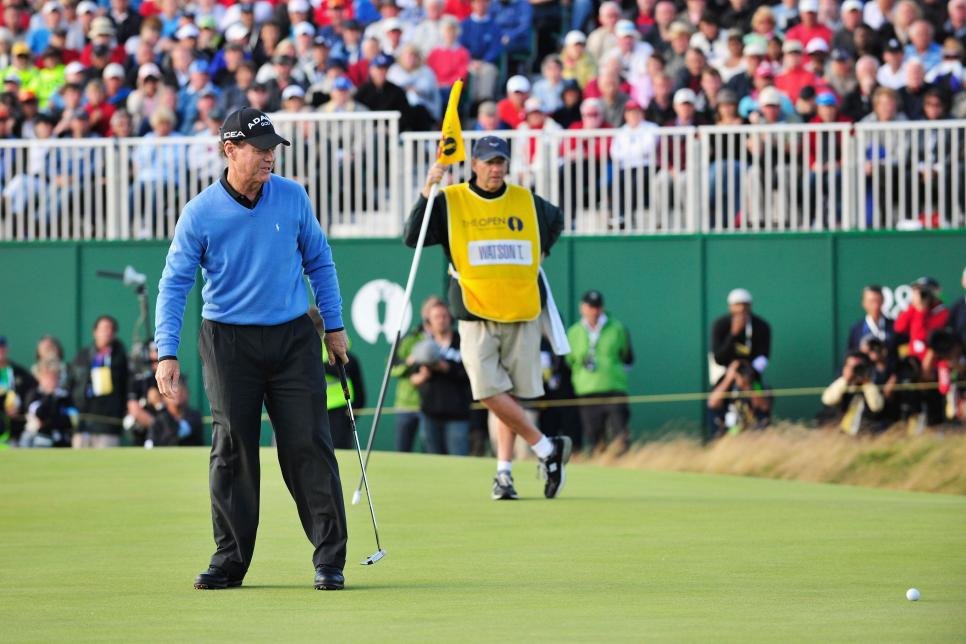 Tom Watson looks on as he misses par on the 18th hole of the final round at the 2009 Open. The errant putt sent him into a losing playoff, which denied him an historic opportunity to become the oldest golfer to win a major at the age of 59.
Posted Sunday, June 6, 2021 8:00 am

Phil Mickelson’s masterful finish at the 2021 PGA Championship cemented his place in history as the oldest golfer at the age of 50 to win a major. While history seldom glorifies the “almost”, or the “near-miss”, Tom Watson’s performance at the 2009 British Open deserves at the minimum, an honorable mention.

Watson was just a few months shy of his 60th birthday when he missed an 8-foot putt on the last hole of the final day of the Open. The unforgiving error sent him into a 4-hole playoff that ended up sealing his doom. It was a miserable one, too.

As if willed by the Gods, the reach for immortality was suddenly and inexplicably snatched away from the seasoned golfer. Only the ancient Greeks could explain such a dramatic turn from what would have been one of the greatest upsets in all of sport, let alone golf.

Watson was one of the world’s leading golfers of the 1970s and 1980s, winning 70 professional tournaments, including 8 majors. His legendary, though respectful battles with Jack Nicklaus helped increase golf’s popularity 2 decades before Tiger Woods arrived on the scene.

With 5 Opens to his name, the veteran champion was the undisputed American king of the British Isles. His last triumph at a major was the 1983 Open when he fired 275 (-9) at the Royal Birkdale Golf Club to beat out Andy Bean and Hale Irwin who were both tied for 2nd place with just 1 stroke behind.

At the time, Woods was a 5-year-old and Mickelson was barely a teen-ager. Twenty-six years later, Watson was back across the Atlantic taking on a field of young guns at the 138th Open Championship in Turnberry, Scotland. Woods was there, but Mickelson did not participate since his wife was recovering from surgery.

Watson was just one of the players in a field of 156 contenders chasing the Open. Going into the tournament, little attention was given to Stewart Cink, an Alabama native who enjoyed a top-10 ranking for 40 weeks, but had never claimed a major. It was this outsider who ultimately got the better of the ageless competitor.

Turnberry staged its first ever Open in 1977 when Watson defeated Nicklaus by a single stroke, scoring a 268 (-12). As the two broke away from the pack under a clear sky, the tournament would be remembered as the “Duel in the Sun”. Later on, the 18th hole on the course was officially named just that.

Clear skies is what greeted the players on July 16th, 2009 when they stepped up to the tee to launch the 4-day contest. Since hosting its last championship in 1994, the grounds along the southwest coast of Scotland had been lengthened by almost 250 yards, including 60 yards that were added to the 17th hole and 45 yards to the redesigned 16th.

Beyond the fairway, the world was still gripped by economic gloom as the effect of the 2008 financial meltdown was entering its second year. Attendance at professional sporting events was off by almost 20% compared to previous years and the organizers at Turnberry were offering transportation vouchers to draw in fans.

The first round saw Watson walk away tied for second after carding a bogey-free 65 (-5). Others in his age bracket held their own as well, with Mark O’Meara aged 52 and Mark Calcavecchia aged 49 both tied for 10th at 67 (-3). Woods, the world’s No. 1 ranked player at the time, struggled from the beginning and finished the day at 71 (+1).

High winds and scattered showers disrupted the field’s scoring average in the second round, but the 59-year-old birdied 3 holes in the back 9 to move up the leaderboard and tie Steve Marino for first place at 135 (-5). Meanwhile, Woods shot a 74 to finish at 145 (+5), or 10 behind first place. He missed the cut by just one stroke and was out of contention.

Over the weekend, Watson continued to roll back the years and plant the American flag. On Saturday, he swung a one over for 71 to capture the top spot at 206 (-4). Cink, tied for 6th at 209 (-1), was separated from Watson by two Englishmen (Ross Fisher and Lee Westwood), an Australian (Mathew Goggin), and a South African (Retief Goosen).

Sunday saw the tournament trade leads in dramatic fashion. Fisher was ahead by as much as 3 strokes, but a quadruple bogey on the 5th sent him out of the race for the rest of the day. With an eagle on the 7th, Westwood moved to first place but 4 missed pars in the back 9 pulled him down.

By the 17th hole, Watson was in sole possession of the lead with a single stroke. The anticipation of victory was palpable but going into the 18th, destiny had a different plan for the senior golfer. Needing a par 4 on the 18th to win the entire event, Watson failed to land on the green until his 3rd shot and then missed the crucial putt.

Meanwhile, Cink, waiting in the clubhouse, had already made magic with a 15-footer to birdie the 18th. The two were now tied in regulation at 278 (-2) and were heading into a playoff.

Holes 5, 6, 17, and 18 became the battleground between a 36-year-old who had never clinched a major and a veteran who was gunning for his ninth. However, in one of golf’s most anti-climactic finishes, Watson ended up collapsing in spectacular fashion.

While both players found themselves in bunkers, the grind of the previous 4 days got to the legend of the links, who failed to birdie any of the 4 flags. He even double-bogeyed the 17th after taking four shots to settle on the green and then another 3 putts to sink the ball.

In contrast, Cink had managed just 2 shots to get on the green and 2 putts to find the hole. Cink’s second birdie on the 18th buried Watson even deeper, closing out the playoff with a 6-point differential at (-2) to (+4).

Despite Watson’s disappointing finish, his epic drive at the 2009 Open remains an inspiration, resonating with fans whenever an old-timer turns back the clock for a nostalgic trip.