An Oilman Shapes the Future of the US Open

The famed tournament moves from private to public grounds 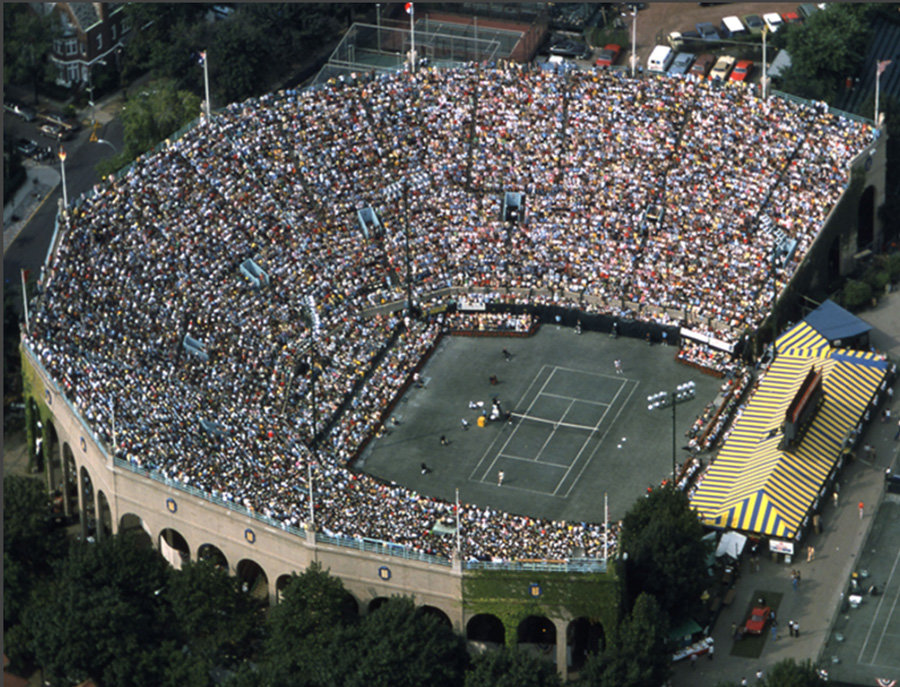 A 1977 aerial view of the West Side Tennis Club, for decades the host of the US Open and its predecessor, the National Championships. In 1978, the event relocated to the newly-built USTA National Tennis Center in Flushing Meadows.
Posted Thursday, September 8, 2022 5:20 pm

In January, 1977, William “Slew” Hester, President of the United States Tennis Association (USTA), was flying into LaGuardia Airport when he spotted the grounds of the old World’s Fair under a blanket of snow.

A year and half later, the cigar-chomping southerner known for his shrewd political skills had his new tennis venue built and ready to host the 1978 US Open.

A decade after the buttoned-up world of amateur tennis opened to professional competition, the USTA decided it had outgrown the West Side Tennis Club (WSTC), home to the National Championships since 1915 and its successor, the US Open.

Located in Forest Hills, New York, the vintage Tudor-style clubhouse and its surrounding courts were the cathedral of American tennis for generations.

For years, the 14,000-seat stadium, built in 1923, stood witness to the game’s rich history. Tennis matured through some of its biggest moments at the WSTC, including the introduction of seedings in 1927, tiebreakers in 1970, and equal prize money for men and women in 1973.

Bill Johnston, the top ranked American player in 1915, was the first to be crowned in Forest Hills when he defeated Maurice McLaughlin for the National Championship.

It was there that Althea Gibson became the first African-American player to win a grand slam on American soil (1957). Arthur Ashe followed in 1968 as the first black man to claim the title.

A year earlier, Billy Jean King ushered in a new age of metal racquets when she raised her first US Open trophy on the premises.

But as the sport grew in popularity and became more commercialized, the event called for an expanded, modern venue. Space was needed for merchandise tents, parking, and the throngs of tennis fans who streamed in for the matches.

Slew’s vision for a new tennis center lay just 4 miles up the road in Flushing Meadows at a former stadium built by the Singer Sewing Machine Company for the 1964 World’s Fair.

The Singer Bowl, which in 1973 was rechristened in memoriam to jazz artist and local resident, Louis Armstrong, left a legacy of sporting events and concerts that headlined the likes of The Doors, The Who, and Jimmy Hendrix.

The Mets also celebrated their 1969 World Series victory with fireworks at the site. But the property was now suffering from neglect and had fallen into decay.

Hester, a former wildcatter from Mississippi who made a small fortune selling participation interests in oil wells, was also an amateur tennis player. Over the decades, he won numerous tournaments, including 9 national senior championships.

Determined to relocate the Open from its cramped home in the affluent enclave of Forrest Hills, Slew approached New York City officials with a grandiose plan of converting the Singer stadium and the adjoining land to a new tennis campus.

As with all big projects at the time, it took the weight and connections of an old boy network to make things happen. Hester asked his friend, Mayor Moon Landrieu of New Orleans, then the President of the National Mayor’s Association, to contact Mayor Abraham Beame of New York.

Beame turned the matter over to Lewis Rudin, a real estate executive who 2 years earlier was involved in rescuing the Big Apple from near-bankruptcy. Rudin took Hester on a tour of several locations, including the Singer Bowl expanse, which was 20 times the size of the WSTC.

In just 4 hours of negotiations with city officials, Hester managed to secure the initial $10 million financing needed for his vision and land a 15-year lease with the New York City Department of Parks & Recreation.

At the time, Gotham was reeling from crime, middle-class flight, and a dwindling tax base. The city was desperate for fresh ideas to reverse the gloom that hovered over the metropolis.

Asked by the Washington Post what the facility’s new name would be, Hester replied- ”If it’s done on time it will be the USTA National Tennis Center. If not, they’ll call it the Slew Hester Memorial.” Working day and night, the renovation deadline was barely met.

The WSTC underestimated Hester’s drive and astute leadership. Against their expectations, he traded their storied private club for a new public partner.

The decision to move the Open morphed into a public feud as the Club tried to push back by appealing to residents, fans and players alike, reminding them of the tournament’s history and tradition.

At a press conference, William McCullough, an executive at the WSTC and a retired NYPD Captain, stirred up additional controversy by arguing that fans won’t travel to Flushing Meadows because the community is “95%...negro”.

McCullough was accused of racism and using false statistics as scare tactics. Arthur Ashe, a prominent Club figure whose membership was automatically granted after he won the 1968 Open, denounced the remark and threatened to resign. Instead, McCullough quit.

Ironically, the last Open in Forrest Hills was the most tumultuous in the event’s history. The tournament could not escape New York’s chaotic summer of 1977, which saw a citywide blackout and the Son of Sam murders.

During the 3rd round, while 18-year-old John McEnroe was facing off against Eddie Dibbs, a spectator was struck in the leg by a stray bullet that was fired from a nearby building.

Other bizarre happenings during those 2 weeks included bomb threats, an apartheid protest, near riots due to scheduling changes, and the Renee Richards transgender controversy.

A year later, the surreal events of 1977 were in the rear-view mirror. The USTA National Tennis Center opened its gates to raving reviews and a record-setting attendance of 275,000 spectators.

Boasting 18,000 seats, the renovated Louis Armstrong structure was the biggest and most significant international tennis arena since the All-England Club in Wimbledon and Stad Roland Garros in Paris were constructed in the 1920s.

Aptly, the USTA National Tennis Center was dubbed “The House That Slew Built”.

Hester died in 1993 at the age of 80, twelve years after being inducted into the International Tennis Hall of Fame. Today, his plaque at the USTA Billy Jean King Tennis Center reads: "His Vision And Boundless Energy Created This Center".