A Motorcycle Museum Offers a Slice of Racing History

“This is history that roars!”, says Ted Doering, co-founder of the Motorcyclepedia Museum (motorcyclepediamuseum.org).

A Motorcycle Museum Offers a Slice of Racing History 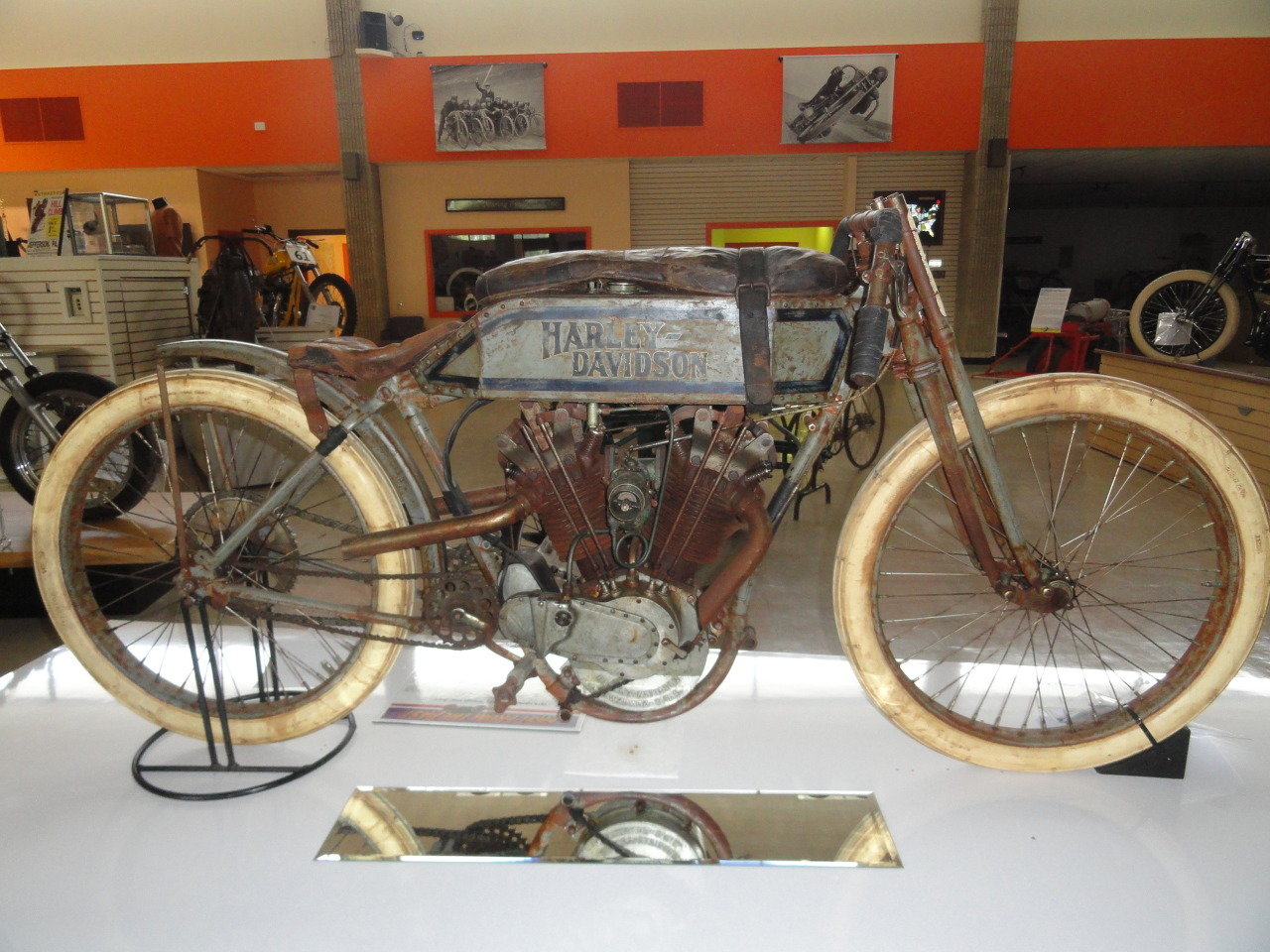 A 1915 Harley-Davidson Dodge City racer shown at the Motorcyclepedia Museum in Newburgh, NY. Note the leather pad wrapped on the fuel tank that allowed rider to lay down his chest and minimize wind resistance during the race.
Posted Sunday, October 24, 2021 8:00 am

“This is history that roars!”, says Ted Doering, co-founder of the Motorcyclepedia Museum.

In 2011, Ted and his father, Gerald, donated their extensive collection of vintage motorcycles to a 503(c) non-profit organization. The result is an 85,000 sf, eye-candy showroom with over 600 bikes on display that date back to 1897.

Situated 65 miles north of New York City in the town of Newburgh, the expansive assembly of motorcycles occupies two floors of an old lumber warehouse. Upon entering, visitors are treated to a dizzying array of memorabilia and vehicles that range from two-wheeled racing machines, to police and military motorbikes, to antiques and choppers.

‘Jerry’ raced Indians in the late 1940s and started collecting motorcycles in 1949. Ted picked up on the passion and began building choppers in the late 1960s. Father and son both grew up in the Hudson Valley area, which was home to a number of dirt race tracks before most shut down in the 1970s.

Jerry passed away in early 2021 at the age of 93 and Ted continues to run the museum, which seeks to educate the public about motorcycles, past and present, and their place in popular culture.

It’s easy to forget that in the early part of the 20th century, hundreds of independent motorcycle brands roared across the country, providing needed transportation to some and racing thrills to others. The museum showcases names like Henderson, Pierce, Orient, and Marsh-Metz, all of which were well known in their day.

Included is an 1897 De-Dion Bouton, a single cylinder 1.75 HP trike that is the oldest running racer in the collection. The French-based Bouton Company was the world’s largest automobile enterprise in 1900, producing aftermarket motorcycle engines as well.

The Deadliest Race on the Planet

With the affordability of cars in the 1920s and the economic downturn of the Great Depression in the 1930s, most motorcycle manufacturers disappeared. Indian and Harley-Davidson, the top two selling brands in the U.S., were the exceptions.

Even Excelsior, the first two-wheeler to officially reach 100 mph (1912) and the third most popular brand behind Indian and Harley, closed its doors in 1931.

The museum’s most noteworthy gallery is the Indian Timeline, a complete set of Indian motorcycles beginning in 1901, the year Indian was founded in Springfield, Massachusetts, and ending in 1953 when the company went bankrupt.

The 1901 model is a replica, though all the pieces that follow are either original, or refurbished originals. Viewers can trace the evolution of the Indian design from its initial bicycle frame to the modern chassis and pick out milestones such as the arrivals of the V-twin engine (1906), the headlight (1910), and the familiar head-dress logo on the gas tank (1934).

Indian and Harley-Davidson, arch rivals since their respective beginnings in 1901 and 1903, curated an American motorcycle culture that remains with us today. Both managed to survive the first half of the 20th century by selling to police departments during periods of financial hardships and to the military during World War I and II.

In the early years, Indian enjoyed a superior reputation for performance and reliability and its motorcycles were winning races before H-D even entered the game (1914). At the Isle of Man Tourist Trophy in 1911, Indian bikes- 3.75 HP, 584 cc- took first, second and third place, beating out Matchless,Triumph and BAT.

A New Chapter for the Dakar Rally

But H-D started pulling ahead of Indian and by 1920, the future iconic brand became the largest motorcycle manufacturer in the world. Two years later, H-D swept all 8 national championship races.

Most of those championships took place on board tracks with steeped banks and surfaces made of wooden planks. Known as motordomes, they were inexpensive to build but lacked durability and required constant maintenance. Board track racing gave way to dirt racing with the onset of the Depression.

Though somewhat limited, the museum’s collection of race bikes is highly eclectic. One item that stands out is a 1915 H-D Dodge City racer with its worn age clearly shown. Among the most demanding of all two-wheeled motor competitions, the Dodge City 300 tested man and machine as they chased 100 laps around a dusty, 3-mile oval circuit.

Other bikes on display remind us of the different forms of races that were popular in the past century, such as a 1941 Indian Scout Hillclimber with its elongated body and grooved rear tire, and a 1930s J.A.P ice racer with nuts and bolts screwed into the tires as studs.

Included in the racing category is a 1928 B.A.C Pacer with a BSA bicycle. Pacers were motorized vehicles that rode in front of bicycles, serving as ‘drafters’ to reduce wind friction for the cyclist behind. Known as motor-paced racing, these events were especially popular in Europe.

For those who enjoy celebrity and pop-culture collectibles, the museum houses several at its Newburgh location. Among them are Billy Joel’s customized H-D, a motorcycle that belonged to Gerry Garcia of the Grateful Dead, Nicholas Cage’s ‘Hell Bike’ from the 2007 movie Ghost Rider, and a replica of the ‘Captain America’ chopper from Easy Rider.

Carrying historical significance beyond brand, or vintage, is an original H-D that was part of the motorcade that accompanied John F. Kennedy when he was assassinated in Dallas on November 22, 1963. The first call that shots had been fired was put out from that vehicle.

Offering a slice of American history that still resonates today, the Motorcyclepedia Museum provides an educational and enjoyable experience  for all ages.