Blood in the Water

The most violent sporting match in Olympic history 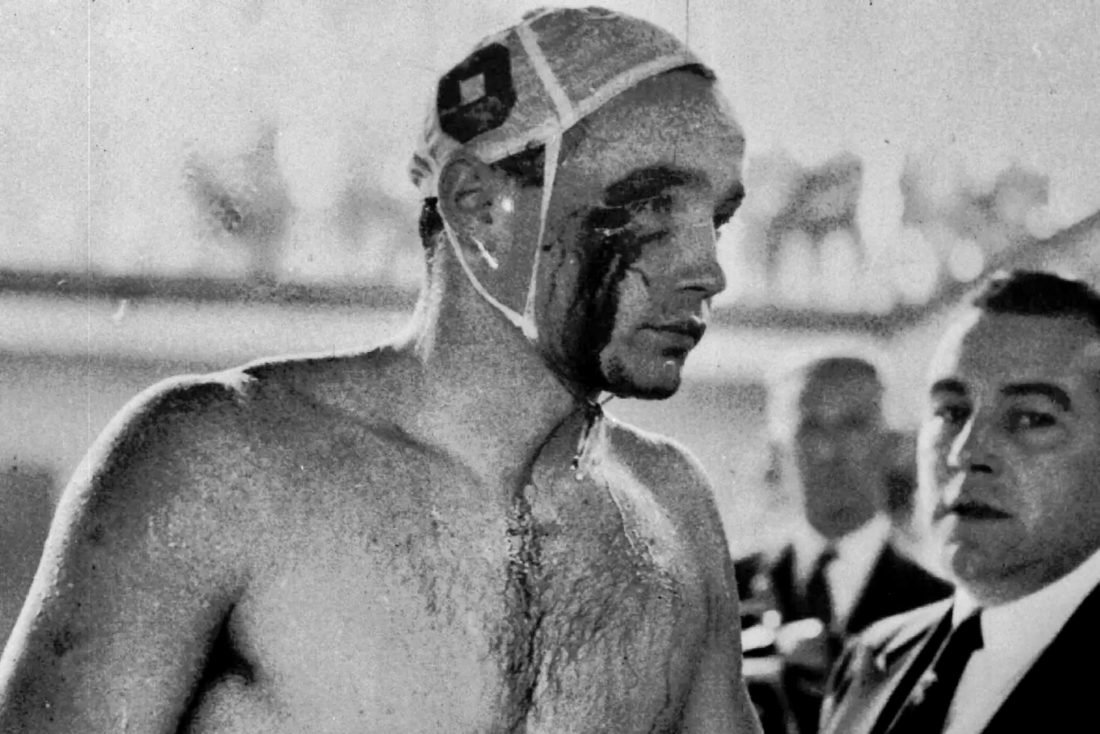 Ervin Zador of the Hungarian water polo team emerges from the pool with a bloodied face at the 1956 Olympics. He was punched by his Soviet counterpart, Valentin Prokopov, in what became the most violent sporting match in Olympic history.
Posted Sunday, July 31, 2022 8:00 am

Held outside Europe and the United States for the first time, the 1956 Summer Olympics took place in late November and early December in the far-flung corner of Melbourne, Australia.

However, no global distance could hold back the enmity between the water polo teams of Hungary and the USSR, whose showdown in the swimming pool became a metaphor for the struggle against political oppression.

66 years on, the match between the two nations at the semi-finals is still remembered as the most violent team encounter in Olympic history.

In the weeks leading up to the Games of the XVI Olympiad, Hungary became embroiled in a popular uprising that saw raging street battles between ordinary citizens and their communist overlords.

A Soviet satellite since the end of WWII, Hungary was kept under the clutches of a repressive ruling system controlled by Moscow and local party hacks. With some initial success, the revolutionaries and their political leaders managed to set up a provisional government but were quickly overrun and crushed by tanks and troops sent in by the red army.

Some 2,500 people were killed and thousands more wounded before the hard-lined communists were back in power.

Do you shop on Amazon? Support us at SPORTS HISTORY WEEKLY and click here to surf for ANY of your products

It was against this background that the Hungarian water polo team set off for the Olympics in November of 1956.

For 20 years, the Magyars were the undisputed masters of the water sport craft. They earned gold at the Olympics in 1932, 1936 and 1952, and silver in 1948.  They also wore the European Championship crown 6 times, including at the inaugural competition in 1926.

Rooted in an aqua-culture that stemmed from the numerous health spas that dotted the country, Hungarians adapted easily to the new water recreation when it arrived to their homeland in the late 19th century.

Improving on the game’s fundamentals, they became skilled tacticians in the sport. Bela Komjadi, legendary player and coach from the early days, invented the ‘air pass’, or the method of passing the ball in the air between players without it hitting the water first.

Though he died in 1933, Komjadi is still widely celebrated in Hungary with public sports facilities and monuments named after him. In 1995, he was inducted into the International Swimming Hall of Fame.

In early November of 1956, the Hungarian water polo squad was training in the hills outside Budapest when Soviet tanks were poised to enter the capital. They heard the gun fire and saw smoke billowing from different parts of the city.

Officials decided to transfer the team to Prague in Czechoslovakia in order to separate them from the events that were unfolding in the country. Kept incommunicado in Prague, the team departed for the games in Australia under the impression that the revolution had succeeded.

However, they only learned of its failure and brutal crackdown when they arrived in Melbourne and read about the developments in the free press.

At the games, ten nations were in contention for the water polo title.  Assigned to Group B, Hungary handily defeated Great Britain (6-2) and the United States (6-1) before proceeding to the next round where they knocked out Italy and Germany, both with a 4-0 score.

The water masters were now facing the USSR in the semi-finals. Seething with fury over the political violence that was unleashed against their country, the Hungarian athletes entered the swimming pool on December 6, 1956 knowing they were carrying the torch of freedom for their nation.

The Central Europeans were also edged on by a crowd of expatriate Hungarians, as well as Americans and Australians who were both Russia’s cold war adversaries.

A physically demanding sport where harsh kicks and rough flings of the arms are as punishing as the swimming itself, the match turned violent from the very beginning.

Trading blows and headlocks, the battle between the two national squads devolved into a water borne brawl. Over the course of the game, the referee ordered 5 players out of the water for penalties- 2 Hungarians and 3 Russians.

The Hungarians’ strategy was to taunt their opponents verbally and distract their gamesmanship. The Magyars netted the first goal and then followed-up with 3 more as the Russians failed to answer with any of their own.

Do you shop on Amazon? Support us at SPORTS HISTORY WEEKLY and click here to surf for ANY of your products

With a minute left to the clock and the score at 4-0, the USSR’s Valentin Prokopov swam towards Hungary’s Ervin Zador and landed a punch on his upper right cheek while the ball was on the other end of the pool.

Zador exited the water with blood dripping from his face, which later required 13 stitches. With spectators in an uproar over the flagrant attack, the police were called in to avert a melee and officials declared the game over.

The Hungarians won the match 4-0 and the Soviets were given a security escort out of the arena.

Zador had scored 2 of the 4 points but he would be out on injury in the final. Despite his absence, his team defeated Yugoslavia 2-1 the following day to claim the gold medal.

After the closing ceremonies, half of the members on the Hungarian squad sought asylum in the West, refusing to return to their Soviet-occupied country. 21-year old Ervin Zador ended up in California where he later coached a young Mark Spitz, the future 9-time Olympic swimming champion.

In 2006, film producer Quentin Tarantino released his documentary “Freedom’s Fury” to commemorate the 50th anniversary of the event. Narrated by Spitz, it captured the story on screen against grainy original footages of the Hungarian revolution.

The filmmakers had also managed to bring together 13 original players from both sides for what proved to be a heartfelt reunion of former arch-rivals.

One of the most emotionally-charged games in sports history, ‘Blood in the Water’ embodied the cold war era when even athletes were caught up in the maelstrom of history.