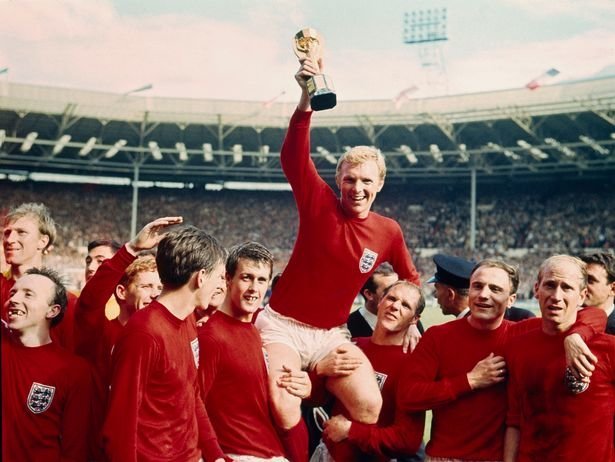 England's Geoff Hurst hoisting the trophy after defeating Germany 4-2 at the 1966 World Cup. To date, it remains the first and last World Cup title for the country that invented the game.
Posted Sunday, November 27, 2022 8:00 am

The country that invented, codified and spread the most popular sport in the world has only one World Cup victory.

The year was 1966 and John Lennon famously proclaimed that the Beatles have become "more popular than Jesus". Several months later, it was England's national soccer team that were cause for celebration when they defeated Germany 4-2 for the Cup title.

A combination of home field advantage, a determined coach who boldly predicted a win for his country, and a mix of remarkable players made it all happen.

Alf Ramsey formally took over as England’s national team manager in 1963 and immediately came out and declared “we will win the World Cup”. A member of England’s 1950 World Cup squad, Ramsey was a defender with Southampton and Tottenham before retiring from play and taking on a role in management.

Ramsey had proven himself with Ipswich Town, a team he guided to 3rd Division winners in 1952-53, then to 2nd Division champs in 1960-61, and then to 1st Division titlists in 1961-62. That upward journey defied all expectations and his magic touch would now be tested in shepherding the national team.

Shaking things up, he insisted on complete control over squad selection instead of following the previous protocols of picking players through a committee.

Ramsey’s first major decision was to name West Ham United’s Bobby Moore as captain. Only 23 years old, Moore was a standout defender and by the end of his career would be regarded as one of the greatest of all time in the back position.

Other players on the West Ham roster who joined Moore included midfielder Martin Peters and striker Geoff Hurst. Peters made an impressive international debut in the warmup games leading up to the Cup, though Hurst showed a mediocre start and sat out the early matches.

Ironically, Hurst would later walk away immortalized as the only player in FIFA history to perform a hat-trick in a Cup final.

Another forward was Liverpool’s Roger Hunt, who would play all of England’s six matches and score 3 times. Manchester United’s Bobby Charlton was making his third appearance for England at the quadrennial event, complemented by 21-year-old Alan Ball from Blackpool.

Pairing the veteran with the youngest and most energetic player on the team helped create the desired synergies on the pitch. In goal was Gordon Banks, the first-choice keeper from Leicester City who would start in every game at the Cup.

Experimenting with different formations during the opening round of the group matches, Ramsey settled for a narrow midfield core and switched from a 4-3-3 geography to 4-3-1-2. His squad became known as “The Wingless Wonders”.

BUY- 'What is the World Cup?' illustrated paperback for kids

Only 16 teams competed for the trophy in 1966, half the number that went to the World Cup in 2022. After tying Uruguay 0-0 in the opening match, England dispatched Mexico 2-0 and France 2-0 to secure a berth at the knockout stage.

Their face-off with Mexico saw Jimmy Greaves, a prolific scorer with Tottenham, get injured and sidelined for the next games. Making one of his consequential decisions, Ramsey chose Geoff Hurst to replace Greaves.

At the quarter-final, Hurst sent a header into the Argentine net for the only goal of the match. England won the game 1-0 after the opposing team’s captain, Antonio Rattin, was sent off the field on a harsh call.

Ramsey publicly called the Argentines “animals” because of their violent play and after the match he refused to let his players exchange shirts as was, and still is, customary.

Next in the semi-finals, England faced Portugal and their star player, Eusebio, who was also the tournament’s leading scorer. England prevailed 2-1 with both goals scored by Bobby Charlton. Under pressure to let the recovered Greaves back in for the final match against Germany, Ramsey stuck with Hurst and effectively sealed England’s destiny.

Held at Wembley Stadium on July 30th, 1966, the final match between England and Germany was the last World Cup to be broadcast in black and white.

With 98,000 fans in attendance, Germany’s Helmut Haller scored the first goal in the 12th minute of play. Minutes later, Geoff Hurst sent a header into the net and equalized the score.

Play continued with no points until the second half of the match when Martin Peters placed a shot past the keeper to give England a 2-1 lead.

Just as the game was approaching its final moments, Wolfgang Weber sent a free kick through a crowded penalty area and into the host’s net. The English protested a hand ball against the Germans, but officials ruled the tying point and the contention was launched into overtime with a 2-2 score.

It was in that extra period that Hurst made history for team and country.

After collecting a pass on the German side, the West Ham striker took a shot that hit the cross bar and then bounced down, seemingly behind the goal line. The point was awarded but a debate would continue to rage and the goal became embedded in World Cup lore.

Then, after taking a long pass down the pitch with most of the German squad behind him, Hurst beat the goalie with a powerful shot and landed on the scoreboard for the third time.

That year, England basked in soccer greatness, but the island that launched the game in the 19th century would not raise another Jules Rimet trophy. Perhaps the nation's soccer moment resembled the success of its own Beatles, a once-in-a-lifetime combination that created magic.

More than fifty years on and England reached the World Cup semi-finals only twice, in 1990 when they lost to West Germany in penalty shoot-outs, and in 2018 when they were taken down by Croatia 2-1.

Meanwhile, Brazil has led the international competition with 5 championships followed by Germany and Italy at 4 each.

Despite England's single championship standing, the Premier League remains the most watched soccer league in the world and the 1966 World Cup endures like the British empire, gone but not without its place in history.